China is without a doubt the current hottest spot for aviation in the world. The fleets of the Chinese majors have ballooned in the past decade to make them some of the largest airlines on the globe whilst increasingly a number of independent airlines are starting to chip away at the dominance of the big players. All this activity hasn’t gone unnoticed by the model manufacturers, all of whom base their manufacturing in China. Aeroclassics, JC Wings, Phoenix and Panda models produce a wide variety of B reg aircraft and often they have very attractive liveries. Boeing 737s unsurprisingly are very common subjects and in this review I take a look at a recent release from JC Wings in a most colourful livery.

China Eastern has grown rapidly over the past 20 years and along with Air China and China Southern forms one part of the big three state-owned Chinese majors that, through their own vast operations and the operations of their subsidiaries, controls the majority of the aviation market in China. China Eastern’s fleet currently stands at an impressive 430 aircraft. Of these, as with all the big three, there is a split between Boeing 737 and Airbus A320 families in the narrowbody lineup. Many of China Eastern’s 102 737NGs are based in Yunnan but they are dwarfed in the fleet by the 36 A319s, 165 A320s, and 67 A321s.

The Enshi Tujia and Miao Autonomous Prefecture is a region located in the southwest corner of Hubei province in Central China. It is a mountainous region with spectacular limestone karst topography and heavy forest cover. Enshi City is the capital of the province with a relatively small population of about 780,000 and is served by Enshi Xujiaping Airport. From here China Eastern serves Beijing, Shanghai and Wuhan. In June 2010 China Eastern unveiled B-5475, a 2009 build 737-800, in a special ‘Tujia – People Waving Dances’ colourscheme to promote tourism in the region. In July 2014 this scheme was replaced by an even greener ‘Welcome to Enshi’ scheme on the same aircraft.

For those bored by China Eastern’s most recent all white livery they do at least operate a wide variety of aircraft in special schemes. Interestingly this aircraft actually still wears the old China eastern roundel on the tale rather than the revised symbol. She can be seen around the vast China eastern domestic network advertising the delights of Enshi.

The 737NG series has had a wide variety of moulds made for it from all the major manufacturers and yet none have really captured the aircraft perfectly. The current mould used by JC Wings and Gemini Jets dates from 2014 and when it first came out I was not impressed with it at all. JC Wings however do seem to show a history of gradually improving their moulds, which is good however I’d prefer it if they didn’t use their customers as guinea pigs for moulds that sometimes appear incomplete.

Starting at the rear the tail end is very good. The shape of the rear fuselage, complete with tailstrike bumper, is perfect and the tail is good, although perhaps a little tall and thin. The shape of the wings is also good, but it is a combination of the wings and undercarriage that creates one of the mould’s issues. The 9air release I bought featured one of the increasingly common issues with JC Wings slot in moulds i.e. the wings were too high at their tips. This is seen often on the JC Wings A330/340 and also on the A321. On my 9air the wingtips (not including the winglets) were at roof height!

Fortunately on this China Eastern release this isn’t an issue, however making the wings more correctly angled does mean the engines don’t have enough clearance at ground level. This may be caused by the wings being too level but is also due to the engine pylon shape not mounting the engines high enough and the undercarriage being too short. Certainly on this release it is not that bad but because of its awful wings my 9air 737 does have engines at a better height off the ground.

Moving to the nose and this was another area my 9air release fell down as the transition from cockpit to radome was too smooth and the nose too pointy. The nosegear did not help the model either as the gear door is flat bottomed instead of gently curved, the nosewheel too large and the gear leg so short you don’t actually see it at all. Things do genuinely seem to have improved with the China Eastern release. The shape around the cockpit looks much better and the nosegear leg can be seen. Whether this is a mould improvement, a construction improvement, a printing improvement or all three I’m not sure but the result is a 737 that looks good. The nosegear door is still the wrong shape and the gear could do with being a millimetre or so longer but it’s actually pretty good.

The last part of the mould to critique are the aerials. This mould has four of the five on the real thing and although shaped well they are a little too large. It’s not as big an issue as on the A320/321 mould and I do like them having aerials.

Whereas previously the wing height and pointy nose of the 9air release really turned me off the model for this China Eastern release they are not issues. As such the mould has jumped from a 5 to an 8.

There’s no denying this is a complex livery to get correct with a complex design and multiple shades of green. Colour is never a strongpoint for my eyes but to me, although the colours look generally good they d o appear a bit washed out and not as bright as on photos of the real thing I’ve seen. This could just be a trick of the light in the photos. The livery itself is rendered pretty much perfectly in terms of elements and positioning, with delicately realized Chinese characters and Skyteam logo. The only mistake I can detect is that the grey belly is a millimetre of so too high. It ought to finish before the rear door and be slightly below the wing line.

A few years ago printing this kind of livery would have been a real challenge but printing quality has really come along in recent times so that it now appears easy. Certainly on this model printing of detail like window frames, cargo doors, overwing markings and door details is excellent. I can’t fault it. 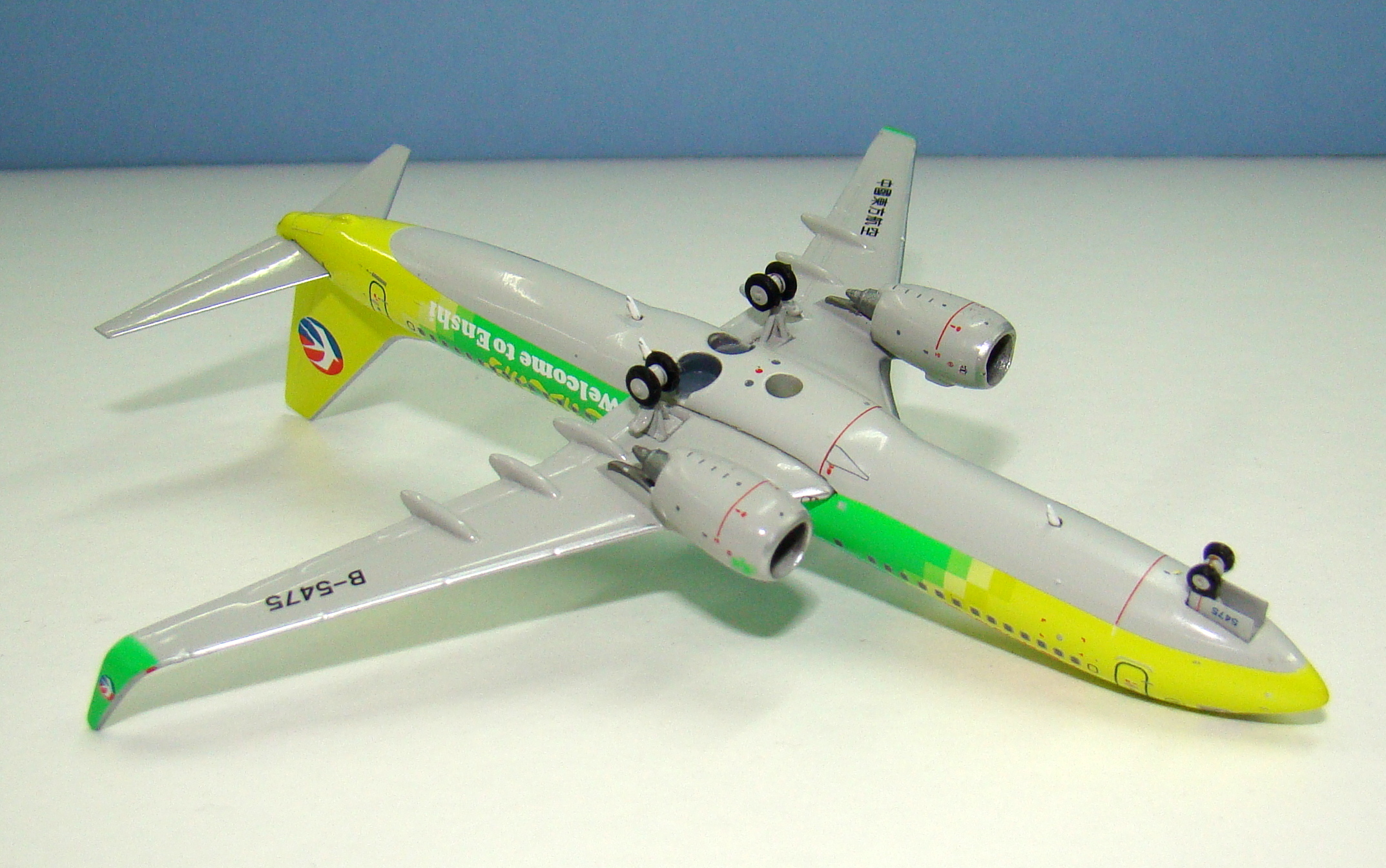 Interestingly unlike all the three Gemini Jets I’ve reviewed so far (which are made by JC Wings for Gemini) this model is almost free of any quality defects. The only thing I can detect is a small diagonal line above the C in China on the titles.

JC Wings have been getting a bit of a clobbering recently for poor quality and not having been awed by this mould first time around I fully expected to be disappointed by this release. That is not the case however and in fact this is the best model I have reviewed so far. I can highly recommend it. I really like the livery and this rendition of it is superb.

Are you a fan like model aircraft collecting and photography? Enter our Model Aircraft Photography Contest! Entries will be accepted through 11:59 PM US Central Time on September 10th. To enter, submit 3 photos of […]

It is not often nowadays that Gemini surprises the collectorate with unusual releases; however they have historically released a wide selection of Air China aircraft. Interestingly this Hercules was actually originally touted as a Skywings […]