The Embraer 120 or EMB-120 Brasilia was once a workhorse for SkyWest Airlines on many of their regional routes. Recently, we have seen Gemini Jets release the SkyWest EMB-120 fleet in installments, with the SkyWest livery being first. The latest release features a 1/200 scale model with the United Express post-merger livery. The EMB-120 has long been a wish of 1/200 collectors and when the first one was announced it was an instant hit!

History of the Aircraft

If we look at the most recent EMB-120 release decorated in the current United livery, it is interesting to see the registration on the tail. According to www.planespotters.net, the aircraft flew for SkyWest until sometime in 2012 before being delivered to Mauiva. It was then re-registered to SkyWest on December 17th, 2013 where it ended its run and is currently stored. While this is the only one in the series that doesn’t bear Skywest’s signature (SW) initials, it is still the cherry on the top of the EMB-120 series from Gemini Jets.

Moving along to the mold of the model we are given a small, yet great size for the aircraft. The mold itself is light and its quality matches the expectations of a larger model. Gemini has attempted to model realistic strobe lights on the top and underbelly of the aircraft. The size of the aircraft is something that makes it challenging to emulate, but Gemini was able to make it work. As an owner of several of the Gemini EMB-120 releases, they did a nice job in ensuring the model was not tail heavy, unlike the Tulip livery version. Overall I have high praise for the model design and construction and they’ve done great work with this release.

If we look at the United livery on all the other Gemini200 aircraft it’s unique and has its own way of being shown on each of the aircraft. On this model it’s spotless. Looking at the detail of the aircraft, it’s difficult to see the markings on the engines which are rather small and blend into the metal. However, when viewed up close the markings are more visible. The lettering on the model is easily visible until we near the express portion of the title. During the photography of the model, it was difficult to obtain a shot where the express lettering was displayed clearly, and this is one place where the paint is too bright. The windows on the cockpit are misshaped on the end sections. On the underside of the right engine air intake, the paint quality is poor and uneven. When I viewed the rear of the aircraft, I initially thought the silver paint was paint chipping, but realized it is actually part of the model’s paint design. The de-ice boots on the propellers look slightly misaligned in some locations and too thick in others. The gold cheat line which wraps near the wings is also uneven on the left side. The United logo is well done, and glistens brightly in lighted conditions.

Looking at the rear landing gear covers they are painted white and appear to be different from the real aircraft, which has bare metal from the engine to rear landing gear covers. It should also be noted that when compared to the real world version it seems that Gemini decided to skip the blue paint numbering on the front landing gear cover. This was disappointing as I would expect them to be “As Real as it Gets”. One other issue I noticed with the model was the paint chipping near the front landing gear cover which indicates a paint quality issue. For the paint and livery I give it a 5 due to the problem of the livery blending in with the white paint, lack of ability to see designs on engines, as well as the chipped paint on the nose gear door, and uneven cockpit windows. 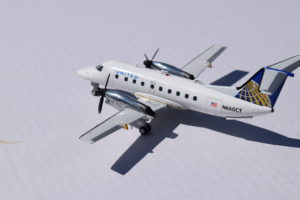 With any Gemini model it is a wait and see game when it comes to quality. Considering that G2UAL606 was the fourth EMB-120 manufactured, I would say they have done an acceptable, but not perfect job. After unboxing the model, I noticed the underbelly was missing the strobe jewel. Besides the missing piece, the antennas are another story and seem to be bent when looking at the model closely, but not from afar. Another noticeable feature of the model is its tendency to tilt to one side when displayed on the stand. This was only noticable when placing the model on a table and leaving it for an extended period of time. When it comes to the landing gear, it’s missing the jewel for the front landing gear light. I would also add the quality of the stand in the box is a big step up from the ones that were offered with the earlier models, which often broke very easily. In the end the only problem I have with the model’s quality is the missing strobe jewel on the underbelly and the appearance of the antennas. 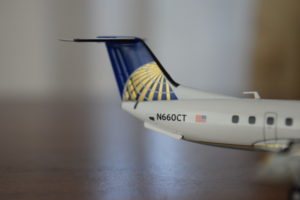 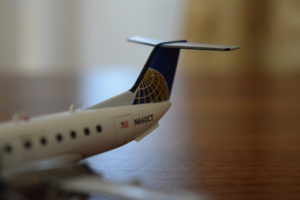 This is a good model in general besides the problems that are present with it. Given the fact that this is the fourth EMB-120 Gemini has released, it has given them room to improve the model over time. The issue with the missing strobe jewel is only minimal, and with regards to the paint we don’t really see any issues until we look closer. Then again the wonderful attention to detail with the globe logo on the tail makes up for this shortfall. There is still room for Gemini to work with in order to make this model stand out against the others. I give them a big positive when it comes to the stand, as they have worked to make it more durable. After waiting many years, Gemini Jets has produced an aircraft that holds a spot in my heart.

Lufthansa has been the leader for smart fleets over the years and recently began the transition towards more modern and fuel efficient aircraft including the A320neo and A350. The airline is also adding sharklets to their […]