In the past 5 years there have been only 2 747-100s and 6 747-200s produced in 400 scale so it is clear that the Jumbo has been neglected for some time. Even prior to that only Witty Wings was producing 747s at any regularity and their bankruptcy in 2014 put an end to that. It hasn’t been since before 2006 that anybody really made a decent range of early 747s and most of these are hard to find, ludicrously expensive or of relatively low quality by 2020 standards.

There has been a suggestion that NG Models will produce its own 747-100/200 but if that does come to pass it isn’t going to be until at least mid-2021. The failure of Big Bird Mk3 to make an impact using the old Big Bird moulds was disappointing, but last month a surprising set of new 747s did appear, using the same classic mould, and the lack of aerials clearly proves who they are being made by even if the boxes do not. For the first time in a long time there were 5 747-100/200 releases in a single month. Long may that continue.

The Iranians are famous for keeping old aircraft flying well beyond the time when they have been retired elsewhere, due to the sanctions enforced against the Islamic Republic by most of the rest of the world. Iran Air continued to fly 747 classics for a lot longer than it ideally wanted to, but the obvious side-effect for the aviation enthusiast was a boon in seeing classic types that were hard to find elsewhere aside from the odd cargo or dodgy charter airline. I myself had the luck to see one of Iran Air’s last Boeing 747SPs in 2015, at Kuala Lumpur, during a stop-over en-route to the UK.

In 2016, with the lifting of sanctions imminent, Iran Air was finally able to place massive orders for new Airbus, ATR and Boeing equipment, but only two years later Trump’s decision to reimpose sanctions killed most of that order backlog dead. By January 2020 the fleet had at least the semblance of modernity about it, being made up largely of Airbus equipment and ATR-72s. Nonetheless, even amongst the Airbus fleet older A300s, A310s and A320s remain.

For most of the 1980s/90s and 2000s Iran Air still relied on Boeing equipment acquired, prior to the Islamic Revolution, by the Shah’s government. This included Boeing 727s and 737s plus a diverse fleet of Boeing 747s, many of which also served with the Iranian Air Force at times. Iran benefitted from the mid-70s fuel crisis and was able to pick-up several 747s second-hand from TWA and Pan Am when both of the latter were struggling. The Iranian Revolution in 1979 ultimately created the Islamic Republic and shut-off the purchase of new Boeing aircraft but a new 747SP and 747-186B were still delivered that year.

Iran Air continued to keep its 747s in flying condition and was even able to source the odd additional aircraft. EP-IAI was a 1981 build 747-230M aircraft delivered new to Lufthansa as D-ABYX “Koln”. She was stored in May 2003 and joined Air Universal as JY-AUA a year later. By the end of 2006 she was with Iran Air as EP-AUA and was re-registered as EP-IAI in April 2008. Despite this late service entry with Iran Air she still saw 8 years of further service and wasn’t finally withdrawn until May 8, 2016.

Iran Air retired the world’s last passenger Boeing 747-100 in January 2014 and EP-IAI is thought to have been the last passenger series 200 too. She was outlived in service by a single 747-200F and a single 747SP. The 747SP survived only a short time longer while the freighter continues in service. It is a shame to see 747s becoming quickly extinct and even with their departure Iran Air’s problems sourcing aircraft do not look like they have been resolved.

This mould is based upon the original Big Bird / Aeroclassics 747 that dates from 2003 but it is not exactly the same as the original. The classic BigBird 747-200 has been lionized for years, and although it is perhaps showing its age it is still an impressive casting.

It has a great fuselage shape, plus comes with very finely done landing gear. The urge to replace the non-rolling gears has, I’m glad to say, been avoided and, as this is an Aeroclassics release, the aerials, that were added to the last usage of this mould, have been removed. That is a shame as the real thing boasted 7 of them. Both these aspects give the mould a somewhat retro-look, which is further accentuated as this is of course a cradle mount.

The seam is tastefully done, running around the natural fuselage/wing join bulge, albeit not getting the shape of it entirely correct. Another minor weakness is the engine pylon / wing join. It is superior to the join of the, much updated, Gemini mould but not quite as good as the, also seamless, Dragon Wings 747.

The vertical stabiliser fit is better on this mould than the competing Dragon Wings 747 and even with the seam the entire mould is much better than the very poor Phoenix 747-200. Arguably the vertical stabilizer is a little thin but it is a minor concern. A particularly nice area is the APU exhaust in the tailcone. 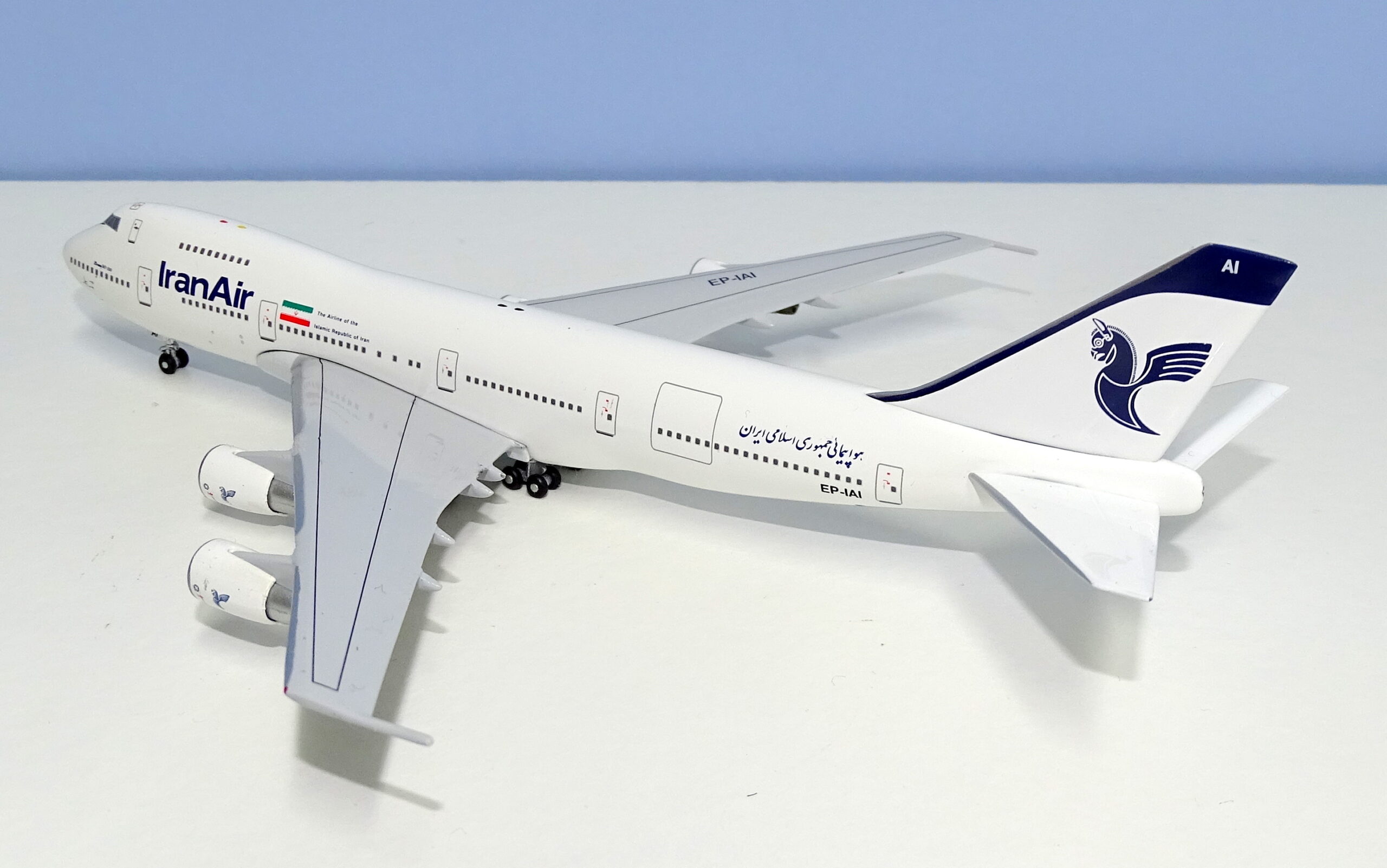 An area that has gained some criticism is the shape of the wingtip HF aerials. Some have described them as ‘broom handles’ since they are quite thick and don’t taper to a point well. Compared to the aerials on the Dragon and Gemini moulds they are longer and nicer. This is the area where the mould differs from the original BigBird mould, which had more accurate tapering aerials. Unfortunately, the original Big Bird aerials are very prone to breakage and these newer thicker versions are a lot sturdier, so honestly the change doesn’t bother me.

This particular aircraft sports the CF6-50E2 engine and compared to the casting for the JT9s this engine isn’t as good on the Big Bird 747. The primary issue is at the engine nacelle, which does not curve at its rear or front as it ought to. This means the engine intakes are too large.

The only clearly superior 747-200 mould at present is the Aviation400/Witty Wings mould – a seamless version of the original Big Bird. This mould is better as it has all the best parts of the original, but no seam, plus retains the original pointier wingtip aerials. I believe this mould is also owned by JC Wings so it is slightly odd that it was not used in place of this Big Bird variant.

This has been for far too long the benchmark in 747-100/200s, only surpassed by the seamless Aviation400/Witty Wings mould. Nonetheless, although still nice the mould is showing its age and should not be able to compete against an all new 2020 standard 747. In the meantime, however it is good enough for me.

This isn’t the first time that this livery has been made on a 400 scale 747-200 as in 2013 Witty Wings actually used its seamless mould to produce a version of EP-IAG. The scheme is very basic but still smart. The centre point of the Iranian flag carrier’s livery has always been the mythical Homa bird of Persian legend and fable. Even though the cheatlines have been lost it remains the primary element.

Aside from the Iranian flag the only colour on the scheme is a dark blue. As per usual in different lighting conditions it looks lighter or darker and as per usual Aeroclassics has chosen a darker shade. It isn’t 100% accurate but it isn’t too bad.

The Homa bird on the tail is excellent, with a nice mane running up its curving neck. The detail at the bird’s face is particularly good. The blue striping on the tail is decent but a little too thick at the tail leading edge.

The rest of the scheme is just the main titles and the detailing. The main titles are good and the font correct on the most part. The only variance from reality is the curving element of the n, which is too large, making that letter a little too wide. The Farsi script near the tail looks good.

Small detailing such as the unusual Boeing lettering ahead of the 747-200, the Homa birds on the engine nacelles and the spacing of the text near the flag all pass muster. 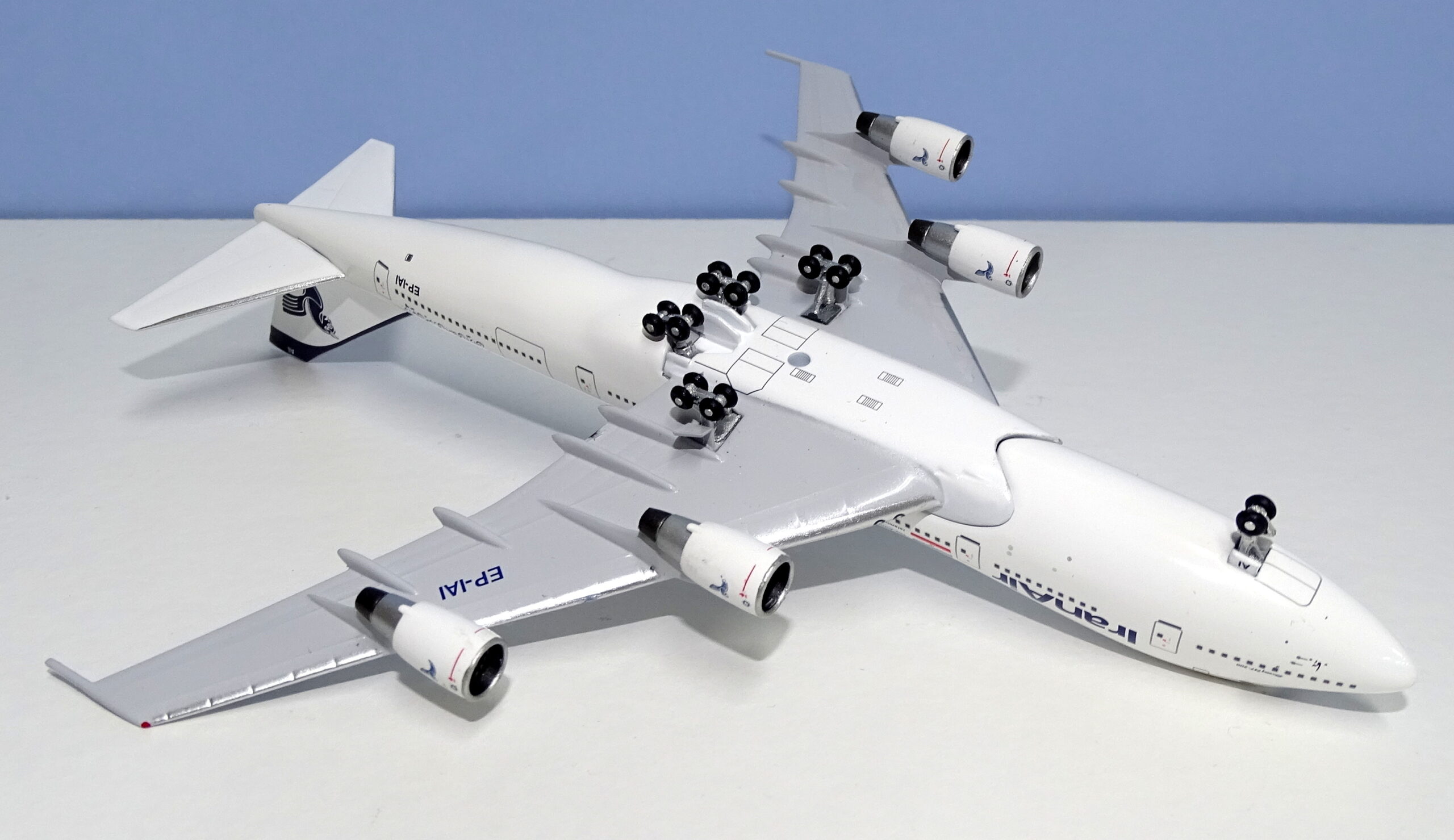 One of the reasons that the initial 747 releases are all Euro-white schemes was to get the factory used to printing on the mould again. This seems like a sensible precaution and overall, the printing is sound, if lacking the extra flourishes that you often get with a 2020 release model, such as panel lines. The printing of the cockpit is good on this model but I can’t but help think that the upper deck windows and escape door are printed too high, although only by a mm or so.

Unlike a lot of older Big Bird 747s Aeroclassics has at least coloured the fanblades a dark shade, although the SAA release did not get this treatment. Build quality of the model is very good and it was nice to see that it came in a much larger plastic case and box than the models used to.

I am very glad to be seeing more Boeing 747s in 400 scale and this is a nice mould, which displays particularly well if you have many other Big Bird or Aeroclassics 747s. Even so, I admit that the model could easily be a release from 2005, rather than 2020, as the only element it displays a model from that era wouldn’t is the dark engine inners. I do not miss rolling gears or see through engines but the lack of aerials, relatively basic printing and the general age of the mould do detract slightly. Still, if the choice is between more classic 747s using this mould and none at all then it is an easy choice to make and I will be acquiring future releases as they appear.

In recent years there has been a proliferation of small, mainly Asian, brands appearing that use existing manufacturers to make models for them. DreamAir of Taiwan, HYJLwings of China and Skywings of China have been […]

New liveries must be a boon to the model manufacturers especially when they are for globally recognised brands like Air Canada. Even Phoenix has been interested in the Air Canada rebrand and they almost never […]