The former local service airlines had been rather ignored over the past decade in 1:400 scale, but that has changed since 2018. Republic itself has now received 4 757s, 3 DC-9s and this CV-580, with of course various other 757s and DC-9s from its progenitor airlines, North Central, Southern and Hughes Airwest, plus its successor Northwest Airlines. I can’t get enough of these releases myself so this Convair was always joining my collection.

Republic Airlines was an eminently sensible combination of one of the largest and most aggressive US regional airlines, North Central Airlines, (regional was not the same as commuter in the 1970s) and one of its smaller companions, Southern Airways. Formed in 1979 the merger made sense as the two airline’s fleets were complimentary and there was almost no network overlap.

Unfortunately, North Central saw that in the new deregulated era it needed to gain critical mass to survive and expand to become a true competitor across the entire USA, not just on the East Coast. It may well have been right about this but its selection of Hughes Airwest as its next takeover option in hindsight was a mistake. Since Howard Hughes had died the airline had become rather unloved and certainly lacked the dynamism to compete against low cost incumbents such as Southwest and PSA, which now weren’t just attacking it intra-state but could do so inter-state also.

The fleets fitted together nicely but little else went right and Republic almost choked on trying to swallow Airwest and its huge debtload. It didn’t help that fuel costs were high, the PATCO strike disrupted schedules and deregulation competition was everywhere. The only bright side was that Republic could boast that it served more destinations in the USA than any other airline, which unfortunately was part of the problem.

The result was that by 1984 the airline was in serious trouble. The board fired the management and brought in Stephen Wolf. The network was cutback drastically to fortress hubs and the airline began to gain ground, but almost inevitably it was caught up in the mid-80s merger mania. Wolf actively courted Republic’s Minneapolis neighbour Northwest Orient. This kind of story would be repeated throughout Wolf’s career. He often turned airline’s around but only seemingly with an eye to them being swallowed up by another. The merger announcement was made on January 23, 1986 and completed in October.

Despite the reduction in shorter routes and swinging cuts to the network Republic’s Convair 580s continued to put in the hard yards. Of the 24 machines that made it into the Republic fleet 14 were still on strength by the time Northwest came calling. This aircraft had originally been delivered to Continental in 1953 as the CV-340 N90856. She was sold to 3M Minnesota Mining & Manufacturing Co in late 1958 and didn’t get back into airline service until May 1969, after conversion to a CV-580. After retirement by Northwest she was exported to Venezuela and served as YV-968C with Los Pequenos Airlines, and from 1997 Air Venezuela. She was withdrawn from use in 2000 after 47 years of service. 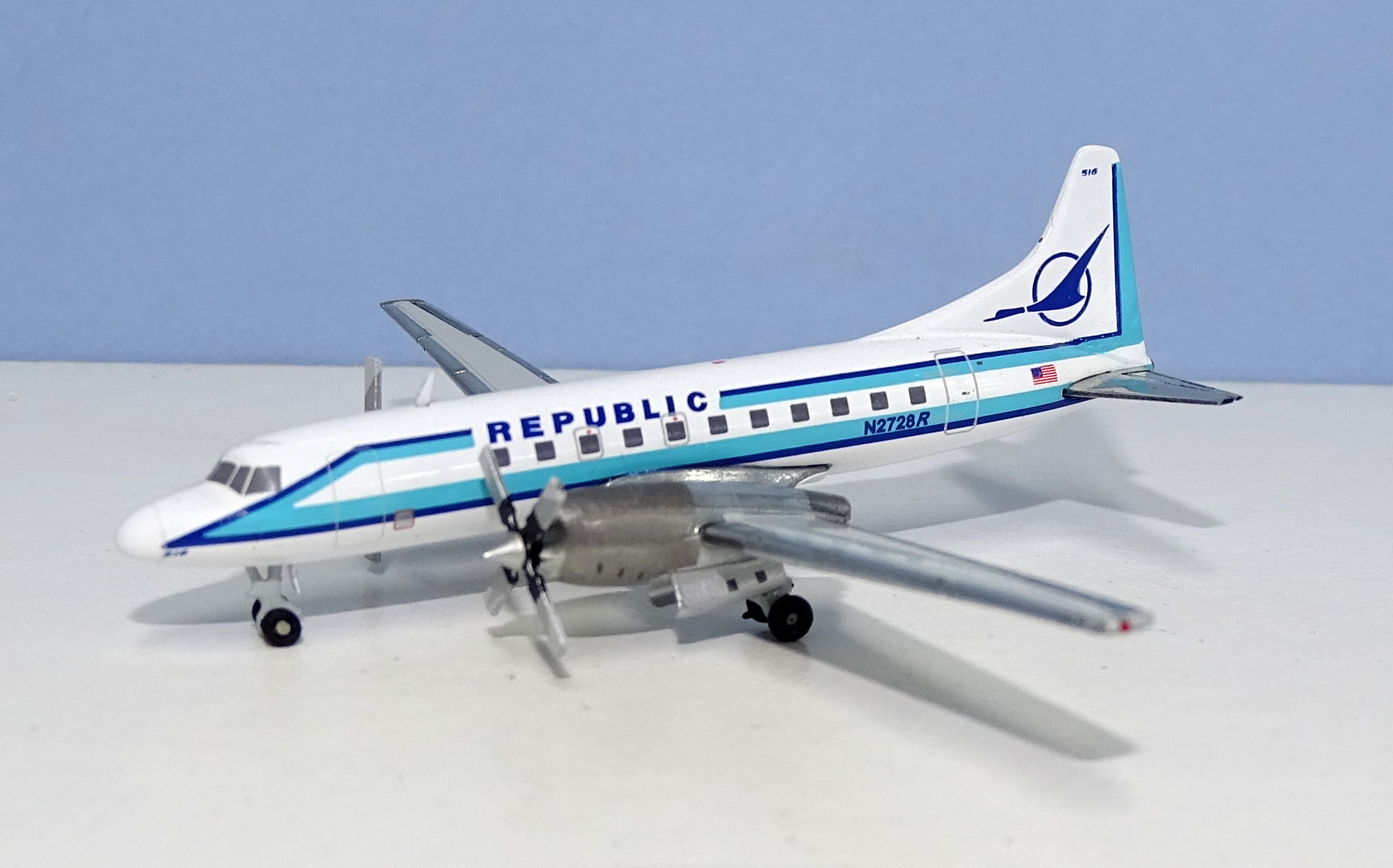 Gemini Jets has been a little more adventurous with its releases recently and let’s hope that Covid doesn’t kill that trend off. This only the fourth Convair 580 they have made but it is now two in two years when up to 2019 it had been two in seven. Small progress, but progress nonetheless. Nobody else in this scale has a CV-580 mould as the excellent Convairliner from Aeroclassics only exists in its piston versions of CV-240, CV-340 and CV-440. 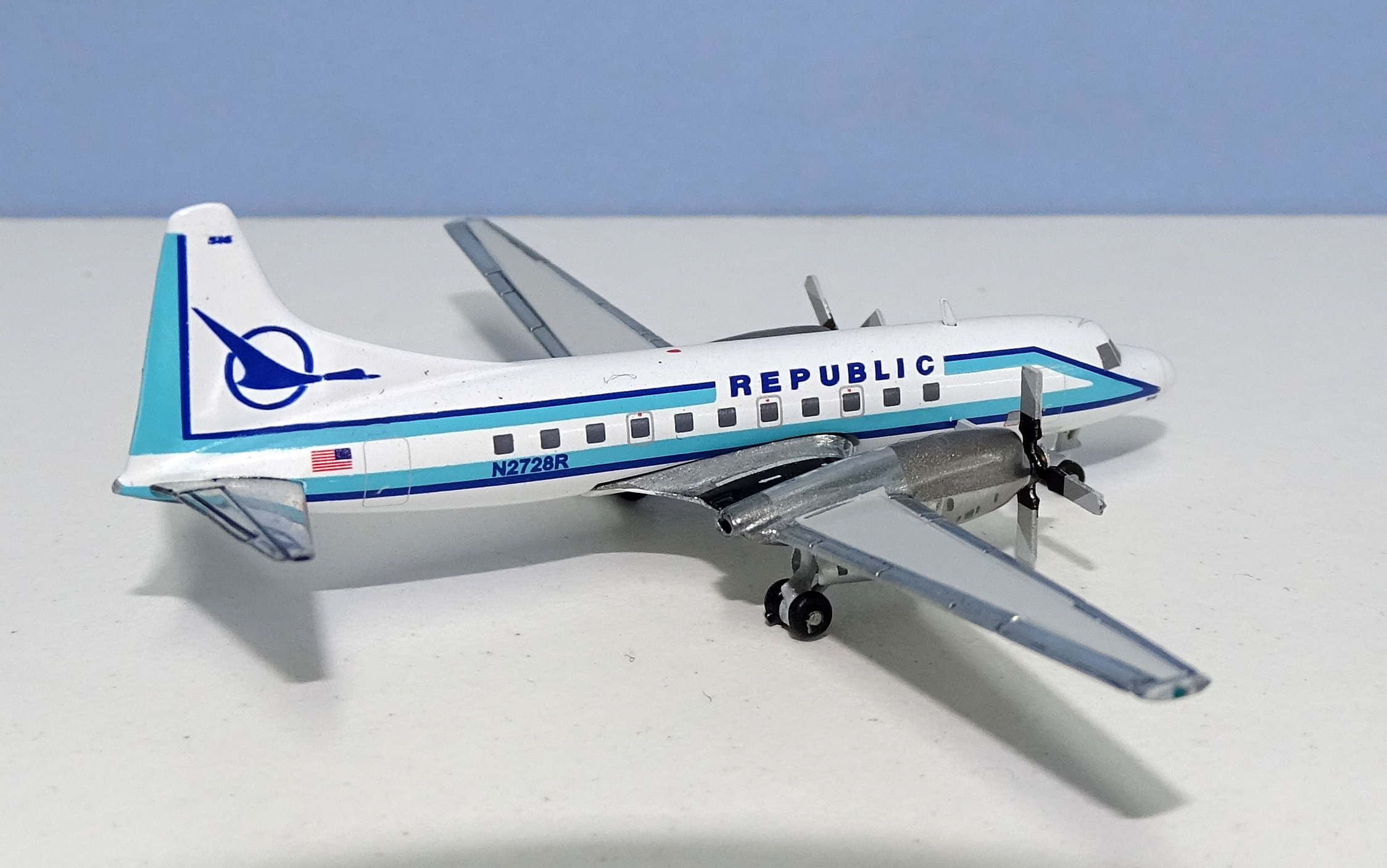 The origins of this mould come from the JC Wings piston engine version, which appeared in 2009. Mating the long nose CV-440 with a new wing and engines created a CV-580 in 2012 and the result is pretty good. Starting with the plus points the wings and engines are lovely single piece fittings. Yes, the mould is a cradle mount, but you don’t really notice, and the single piece engines are an improvement over the Aeroclassics style ones, which are two-piece. The large flat four-bladed propellers of the Allison engines are especially nice.

The fuselage is well shaped. Gemini understandably hadn’t bothered with aerials on such a small model but this release is the first time they have gone the distance and added the big one forward. That’s quite impressive attention to detail considering this is hardly one of their front-line moulds. I do think the tail top could be a little rounder and the nose underside a little deeper but these are minor criticisms.

The mould’s greatest weakness is the landing gear. The maingear isn’t too bad although the wheels sit a little too far back from the geardoors. It is the nosegear which is the mould’s achilles heel. Compared to the delightfully thin and crafted Aeroclassics Convair nosegear the Gemini mould’s is too chunky and also too short. The model stands with a nosedown attitude, when the CV-580 should have a straight back. 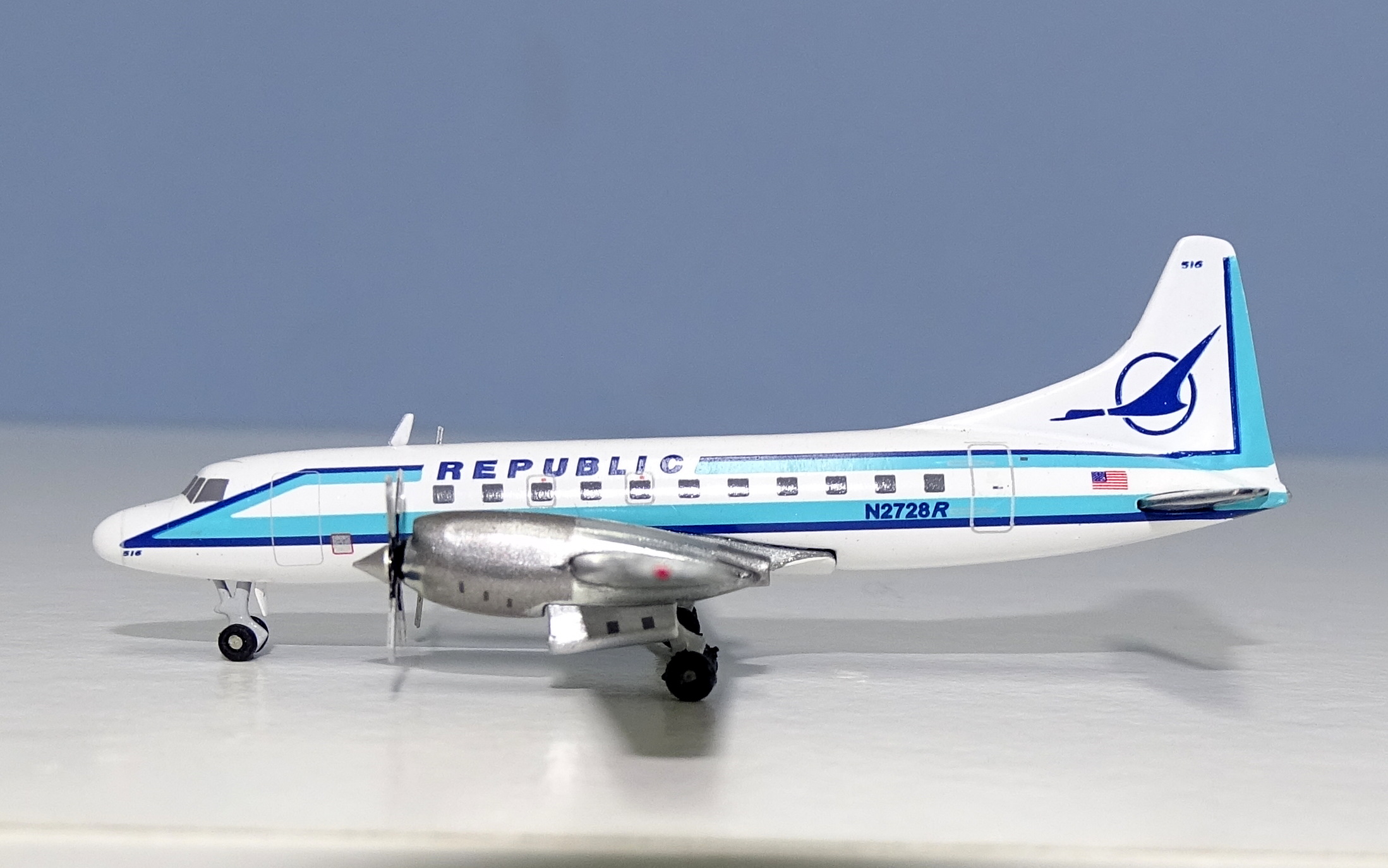 This is a nice little mould. It may not be perfect, and could do with a better nosegear, but it is more than satisfactory. 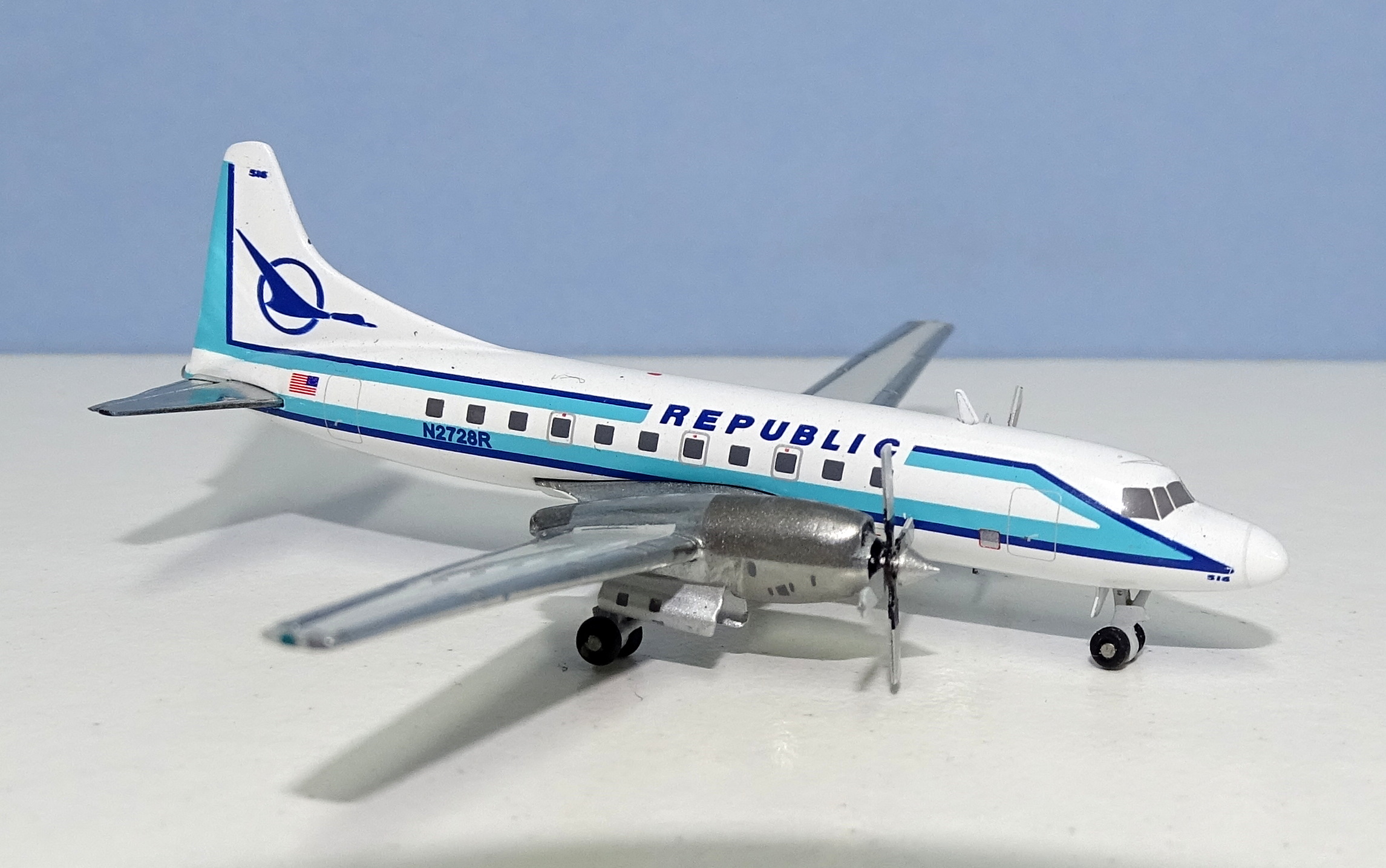 Republic’s Convair’s wore almost the whole gamut of colour schemes available for an aircraft transiting through from North Central to Northwest (only lacking the pair of one-off DC-9 concept liveries). That included the basic NC scheme with Republic titles through to a red tail with Northwest titles. This model wears the first proper Republic scheme, which used the same colours as the original NC fleet and was happily a similar dark blue to Southern as well. 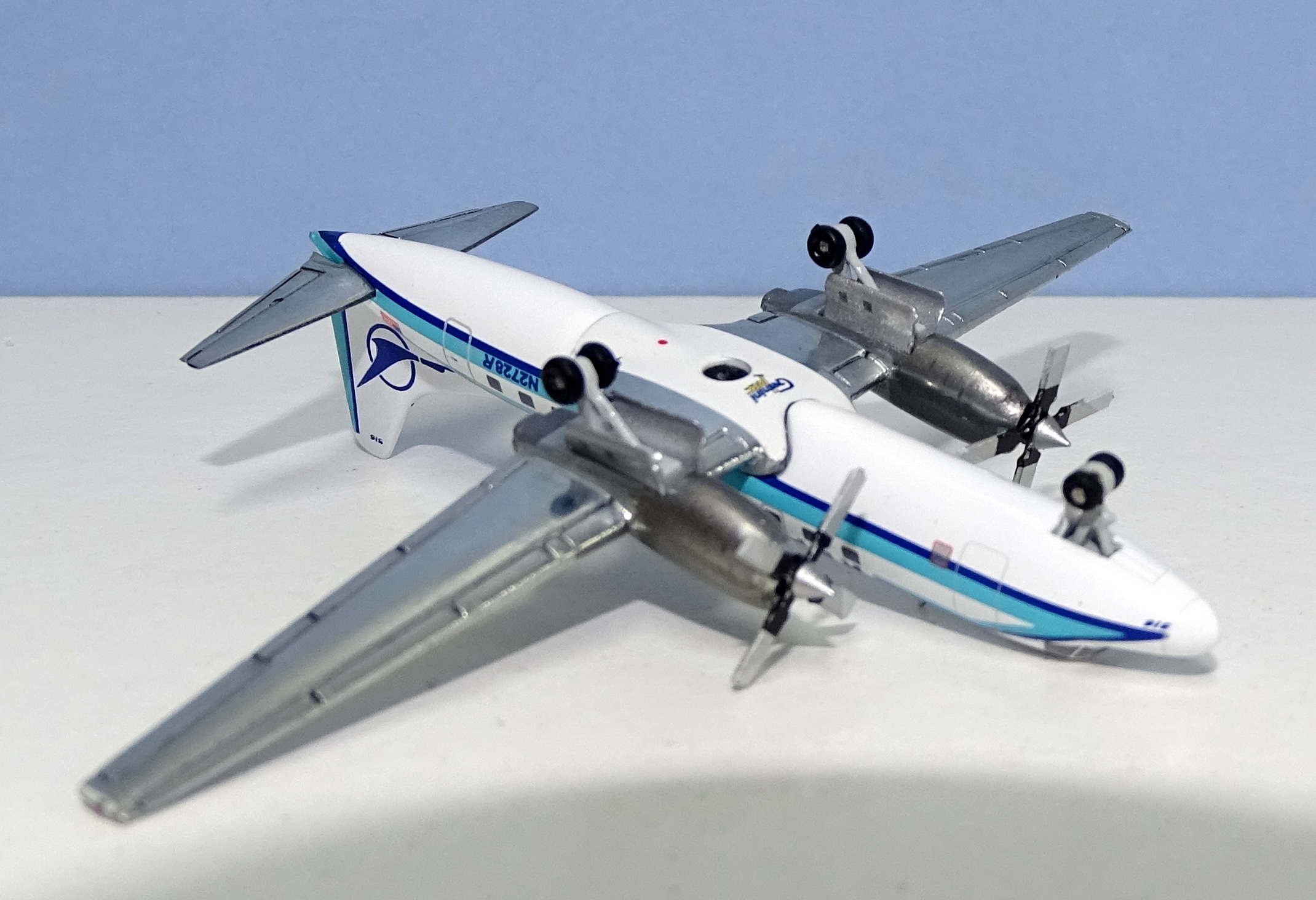 In this livery the entire CV-580 fuselage had a white base, which makes the old Convair look much newer than it was. There aren’t lots of photos of this frame wearing this scheme, but there is an excellent photo by AirNikon on Airliners.net showing her at the gate, at ORD, in March 1984. Aqua and Navy Blue are the two main colours and Gemini have them spot on.

I am pleased that Gemini have paid close attention to the details on this livery. The dual striping arrangement is quite complex but fits the aircraft perfectly with the aqua and blue running up the rudder. They have also impressively achieved accuracy on smaller details such as the aircraft fleet number, 516, at the nose and tail top. Another weird but accurate detail is in the registration where the R of N2728R is italicized. This is corroborated by the airliners.net photo. 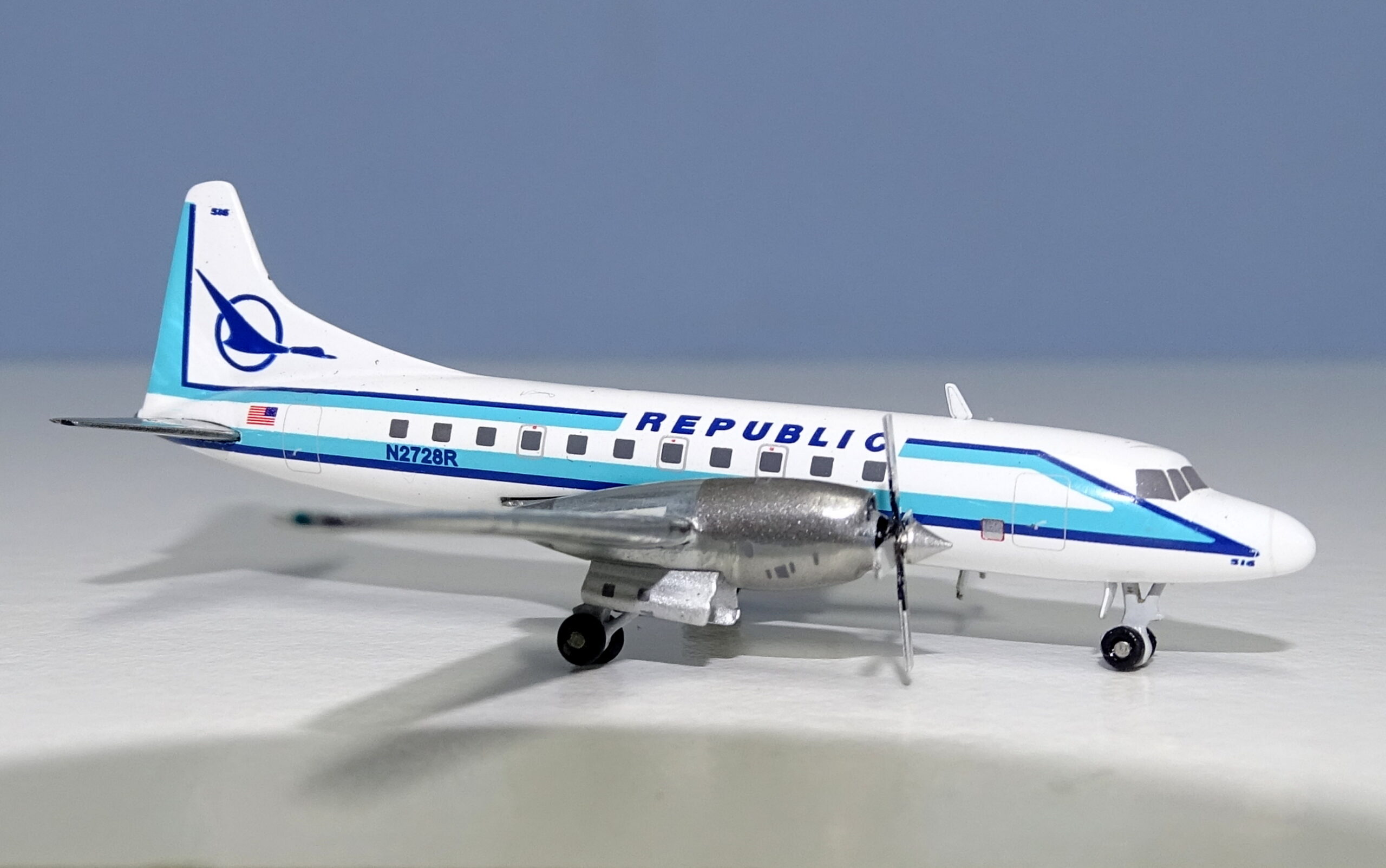 The only criticism I can make is of Herman himself. The Mallard on the tail is angled slightly downwards. Looking at the real thing and his beak should be well above fuselage roof height but on the model he angles down too much. 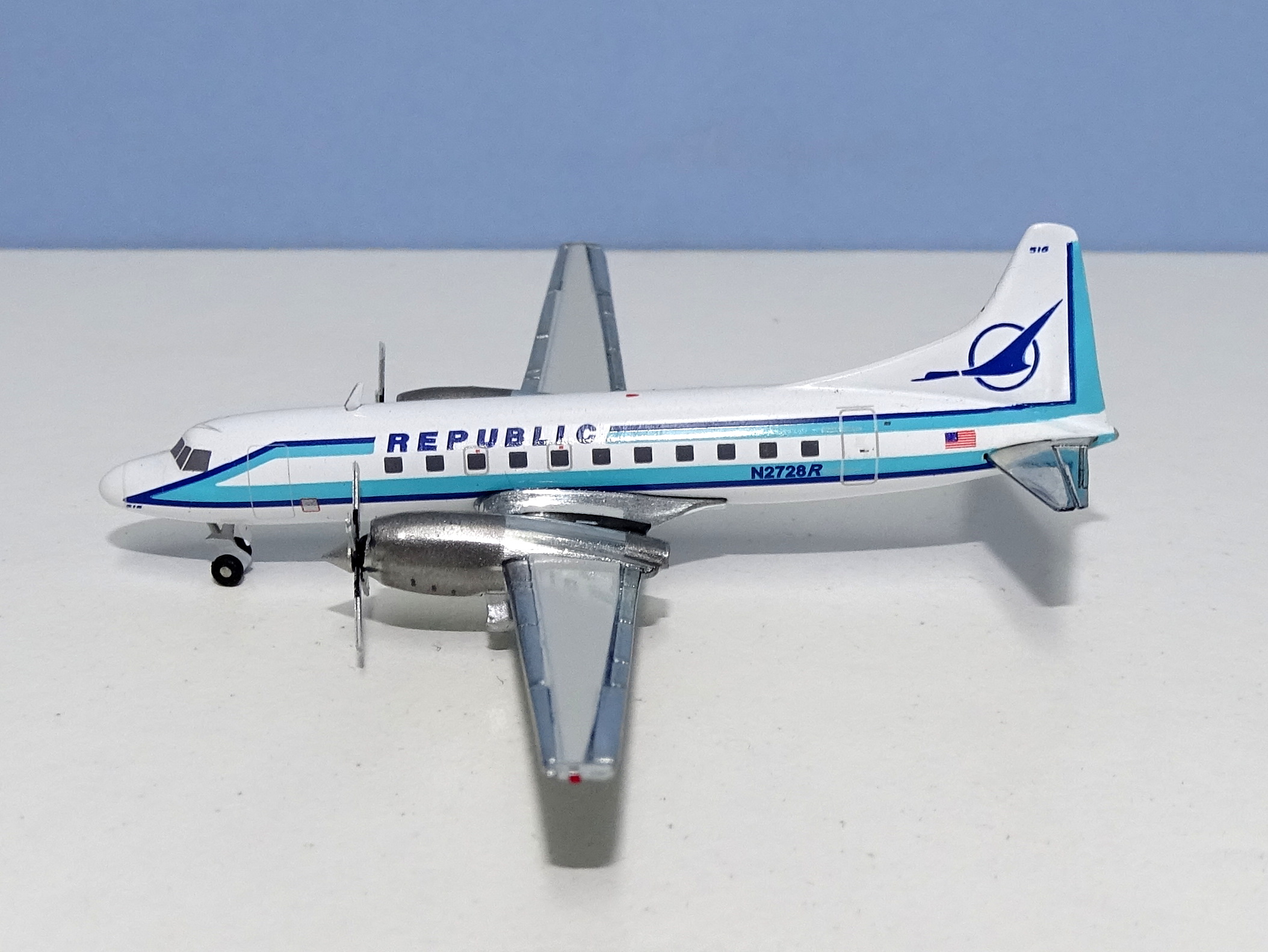 Printing on smaller models is always a challenge and since the mould itself has well defined ailerons and flaps on the wings no extra printing is required there. Gemini have added the outline for the large forward aerial above the cockpit. I’m not sure about the light grey wingtops but I can’t find evidence to clearly disprove them. 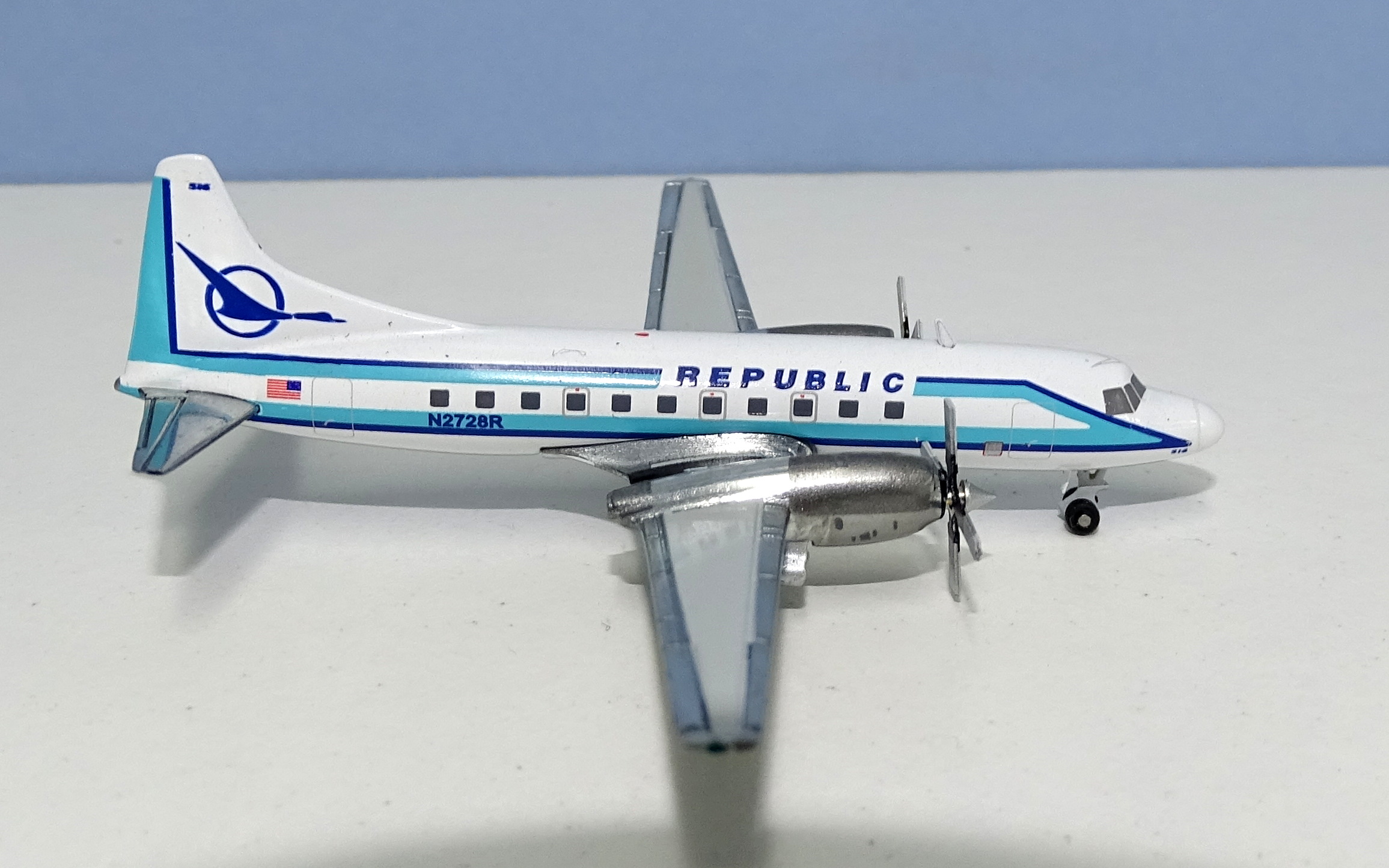 Construction quality is excellent and the model has the same rugged feel as the real thing does. My previous CV-580 was a real tailsitter but this one doesn’t have that problem. It maybe largely because the maingear is too far back and the nosegear a little short but I don’t have to dispense blu-tack to stick it down so I am happy enough.

Good work Gemini Jets, this is a model to savour and I am very happy to see that at least it is looking like we will eventually see all the 1:200 released CV-580s in 1:400 scale.  It’s a shame that we are unlikely to see the North Central hybrid / Republic variant that goes between this one and the previous release. I’m tempted to get one of the earlier release and do a custom. Anyway, all CV-580s are good CV-580s and this is the kind of model that reminds me Gemini are still capable of doing great work. I particularly appreciate the attention to detail with the aerial and small livery details.

The Ukraine is a huge nation, but interestingly, until the release of this aircraft, there had not been a single 1/400 scale model from this country produced. This is no doubt in part to the […]