With 2019 coming to a close, questions are being asked about the future of large airliners even when they are twinjets. Both the 747-8 and A380 are effectively dead, while orders for the Boeing 777-9 and Airbus A350-1000 have stalled. There is a little hyperbole in this as the slowdown comes off of the back of a boom in orders, but with even Emirates downsizing orders it may suggest a growing trend. Competition in 1:400 scale is certainly as strong as ever with the major manufacturers battling it out. For the largest variant of the A350 that means Phoenix, JC Wings and Aviation400. The latter has been lauded for its A350-900 and in this review I’ll see if its series 1000 hits the same peaks.

2019 has been a year of major ups and downs for Cathay Pacific. It entered the year after a successful return to profit in 2018 and with the ‘any publicity is good publicity’ story of the Cathay Paciic spelling mistake on ones of its 777s. Even better its main homebase rivals, the HNA group’s, Hong Kong Airlines and HK Express were in a world of trouble due to the financial problems of their parent company.

Years after avoiding the low-cost market altogether Cathay was able to take advantage of HNA group’s desperation, and in March 2019 agreed to pay HK$2.25 billion ($287 million) for HK Express, thus bolstering its dominant position at its Hong Kong hub and providing a strong deterrent to other low-cost competitors. The deal was completed in July and that is when Cathay’s year began to go off a cliff.

The massive civil unrest that has finally greeted China’s growing encroachment into civil life, and erosion of the ‘one country, two systems’ principle, has been long coming, but it’s explosion in June caught not only the Hong Kong authorities by surprise but also seemingly Cathay’s management. Ever since the airline has been caught in the middle as protesters have disrupted flight operations at Chep Lap Kok and China has demanded action be taken by the airline against employees involved in protests.

Worse, passenger numbers have nosedived, with a 7.1% drop in October, compared to a year earlier, and a 4% drop in load factor at a time when available seat kilometres rose by 2.4%. The result has been cutbacks, order deferments and early aircraft retirements, as well as some financial distress, not helped by the cost of the HK Express acquisition.

The first of the new A350-1000s, B-LXA, was delivered on June 15, 2018 with the latest arriving in May 28. B-LXI arrived on February 1st and gradually the A350-1000s have been deployed on more and more long-haul services. They are configured in a 3 class 334 seat layout with 46 flat bed business class seats, 32 premium economy seats and 256 economy class seats. On October 28 they began serving my home airport of Auckland with the A350-1000. Despite the current concerns there is little doubt that Cathay will survive the current crisis and the A350-1000s will be regular visitors around the globe in the coming decade and beyond.

There have now been 37 A350-1000s either announced or released in 1:400 scale. Nine of these are from Phoenix and I simply don’t rate the Phoenix A350 highly, with its large tyres, long gear legs and yet still poor engine clearance. JC Wings have announced 12 but not all have been released yet and I think all of the ones that have been have the old-style JC A350 nose. Gemini Jets have released a trio using the modified JC mould but although I’ve heard good things about them, I haven’t seen any in person.

That leaves Aviation400 who have made 13 models with what, from distance, looks like a superior mould to the Phoenix by some margin. The Aviation400 A350-900 is already my go-to A350 in this scale and unsurprisingly the A350-1000 continues this excellence since in most ways it matches the 900.

This version still has the great nose profile that is significantly better than those of the Phoenix and older JC Wings moulds. I can’t talk to the new JC Wings version yet but the AV400 nose is good enough for me. It reproduces the slight change in angle upwards beneath the cockpit well. Holding it up in front of a photo of the real thing the change is perhaps still a little too subtle but overall it matches. 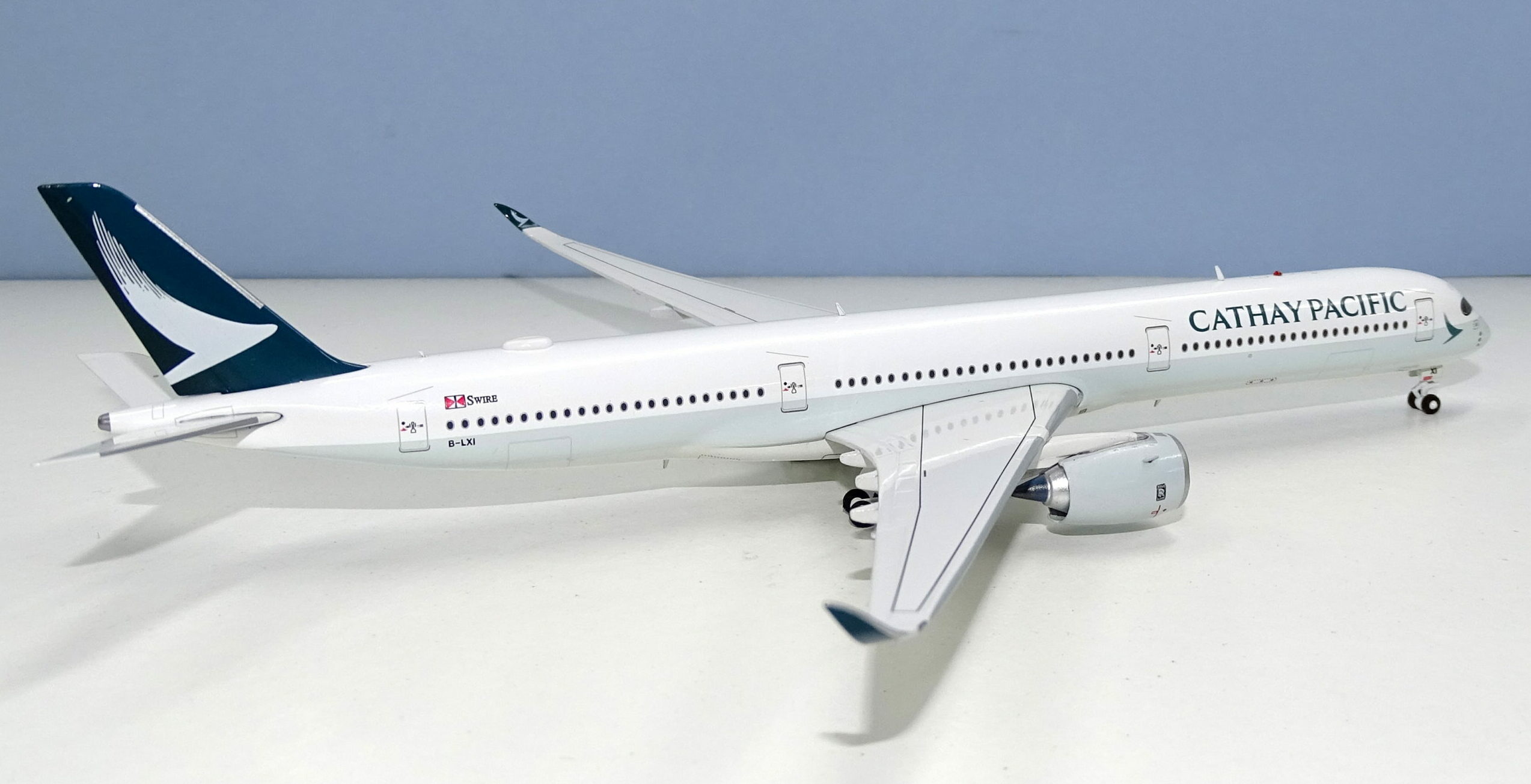 The fuselage is excellent including the complicated post wing area. It also has exceptional mould detailing. The customary Aviation400 nav beacons look great on the A350s, unlike on the A330s. There are five antennae (3 on the roof, 2 on the belly), which are well shaped if a little tall.

The large Wi-Fi dome on the rear fuselage roof is present but the shape is not correct as it ought to be a teardrop form, whereas on the model it is the same height front to back.

The engine pylons and nacelles themselves are very good also keeping the engines well off the ground and closely fitting to the wings. The engine inners are very finely detailed. The engines are see-through but they are essentially the same as on the A350-900 i.e. the blades are way too thin.

Looking at the undercarriage and it is very finely built. The nosegear is a good length but not as chunky as the Phoenix. The maingear bogies are separate pivoting units (as in the Phoenix 777) and so can be moved independently to replicate different positions. The six wheel bogies on the A350-1000 mean the main undercarriage looks better than the smaller bogies on the series 900 as the mechanism to allow the pivot is hidden.

This is a very well-made mould that requires real investigation to fault. The tail top may be a little too rounded, the engine fanblades too thin and the Wi-Fi dome poorly shaped but these are such minor things that knocking more than a point off for them combined would in my opinion be wrong.

Aviation400 had already made four Cathay Pacific A350s in 1:400 scale (two of each variant) before the latest quartet were produced (this model has a sistership release of B-LXJ), but while this may seem odd it is actually a sign of Aviation400 recognising its own mistakes. The first four were rightly pilloried for the incredibly blue shade of the lower fuselage band. It was miles away from reality and these four new releases (one again two of each variant) remedy that issue well. 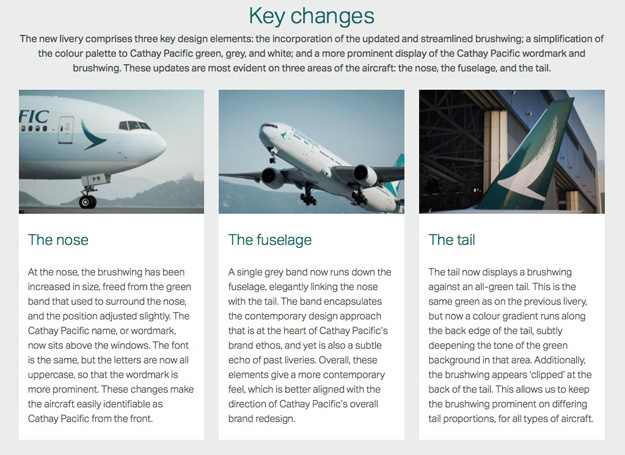 The simplified 2015 livery only uses three colours (green, grey and white) and, although I admit to missing the older version, it does suit the A350 well. The grey colour Aviation400 have used here is spot-on and although the green does look quite light against a lot of photos I think it is fine.

The size and position of the brushwing on the tail and at the nose are excellent. The title font is accurate and well placed. The Swire logo and registration look good also, adding up to a fine recreation of the entire Cathay scheme. It is a simple scheme but Aviation400 have nailed it second time around. 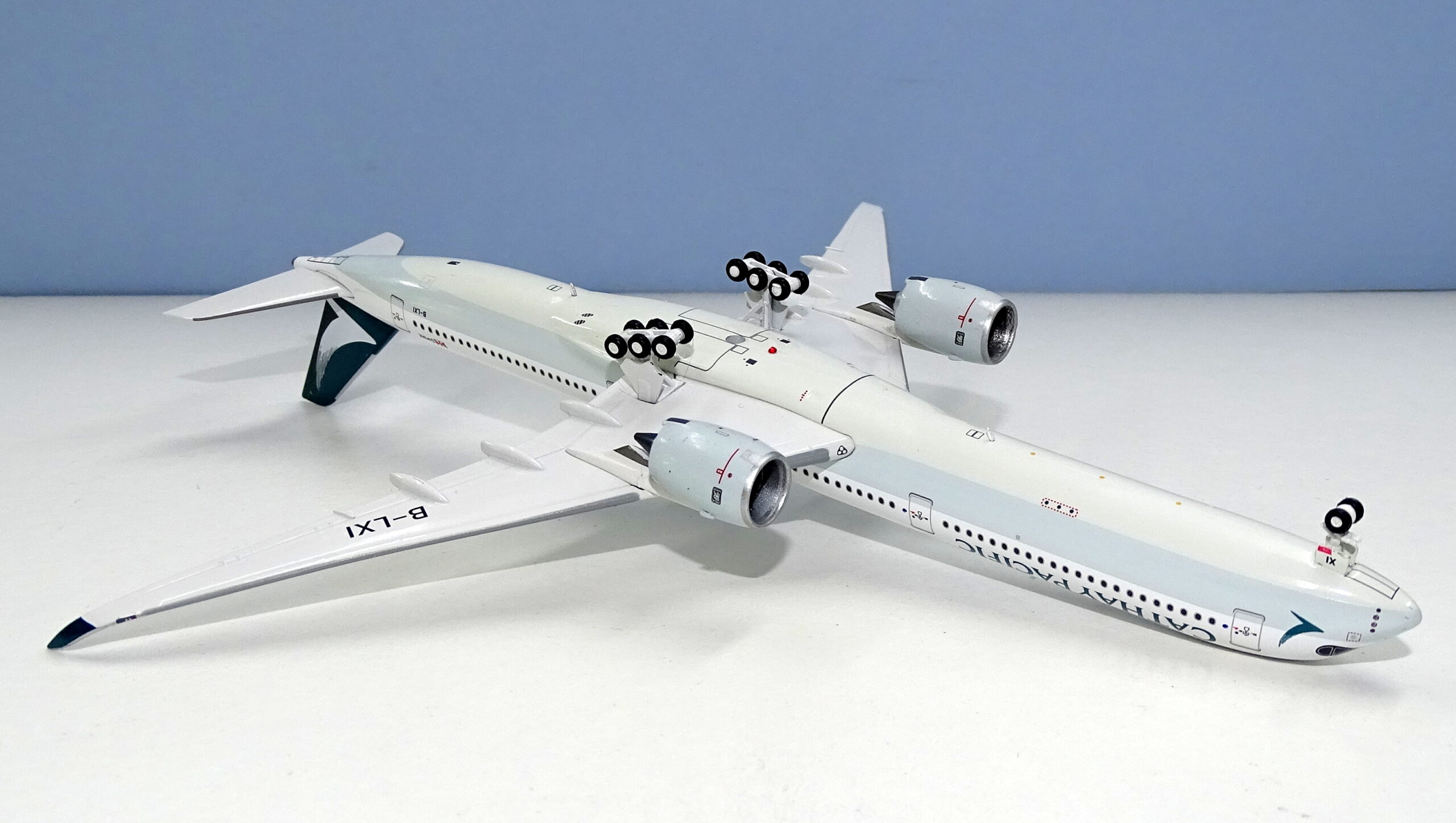 As with my last reviewed A350 from Aviation400 they do correctly colour the engine exhaust cones metallic blue but once again the application of the paint isn’t great. It doesn’t fully meet the forward line of the cone and the blue thins a lot towards the tip.

Build quality of the model is top notch and of course as with all Aviation400 releases it not only comes with an excellent plastic stand but also a lovely little pushback tug. When these models retail in China much cheaper than Phoenix and Gemini and no more expensive than JC Wings it is interesting to see that they can provide these extras at no extra cost.

I may not have been impressed with their A330 but the Aviation400 A350 family are superlative. With corrected colours this Cathay release is top drawer and to be honest I can’t see it being matched by the other manufacturers. I suspect that Phoenix must really be struggling with competition from AV400 and things will only get worse when NG Models starts producing A350s too. I’m not sure they really need to bother as Aviation400 have an excellent mould already and, their initial Cathay stumble aside, produced a great set of models too. I highly recommend this release.

Here are a list of the model shows and popular airshow that will take place next month!