NG Models have built on their first year of production in 2018 to have an excellent 2019, within which they have grown to become one of the major manufacturers. Not only that but in doing so they have thrown the gauntlet down to existing manufacturers and seen off the legal challenges and threats lobbed their way too. Having said that their models are not beyond criticism and there have been some signs of some niggling issues appearing. Most of the criticism has been aimed at the 787 and 737-800, both of which increasingly are present in the monthly release cycle.

I often think you can’t really move to New Zealand as an Englishman and care about Rugby, since the All Blacks, last RWC aside, have been so dominant. Fortunately, football is my game so this isn’t an issue to me, but even for Rugby mad NZ the change by Air New Zealand away from the teal, towards a black and white scheme, was not met with universal praise. Nonetheless, the special all-black version of the scheme worn by select fleet members is very attractive.

The Boeing 787-9 seemed like the perfect fit for Air New Zealand, as it selected its long-haul airliner for the late 2010s, and they were the launch customer for the intermediate variant of the 787. Although the airframe itself has been a success the Trent 1000 engines have been nothing but trouble. ZK-NZE is the only member of the fourteen strong 787 fleet to wear the All-Blacks scheme and was the first of the fleet to arrive, way back on June 30, 2014.

Unfortunately, it was also NZE that first showed signs of the engine problems that have plagued the Air New Zealand fleet, and forced it to ground aircraft for long periods whilst leasing in replacements (A330s from HiFly and 777s from Singapore and Eva Air). On December 5, 2017, whilst performing flight NZ99 from Auckland to Tokyo Narita, the crew of NZE was forced to shut-down an engine and return to base.

The very next day sister-ship ZK-NZF suffered similar issues in the climb phase when leaving Auckland, this time for Buenos Aires. Inspection revealed that turbine blades in the intermediate pressure turbine had separated due to corrosion fatigue cracking. This began an extended stretch outside the NZ maintenance hangars for ZK-NZE, which wasn’t returned to service until May 31, 2018.

Sadly, the engine problems have not gone away and the NZ 787 fleet has been in and out of maintenance regularly ever since, whilst Rolls-Royce struggle to fix the problem with a long-term solution. The end is not yet in sight and Air New Zealand was forced in Mid-November to cancel more than 80 international flights due to the ongoing problems. It still looks like sometime before the fleet will be as active as it ought to be.

The ongoing issues haven’t dampened Air New Zealand’s enthusiasm for the 787, and in May 8 787-10s were ordered, however these new aircraft will be powered by the General Electric GEnx-1B and not the Rolls-Royce Trent. So, although the 787 has allowed NZ to open up previously uneconomic city-pairs it is fair to say that the New Zealand flag carrier has felt the pain of introducing a new type far more than it would want to. 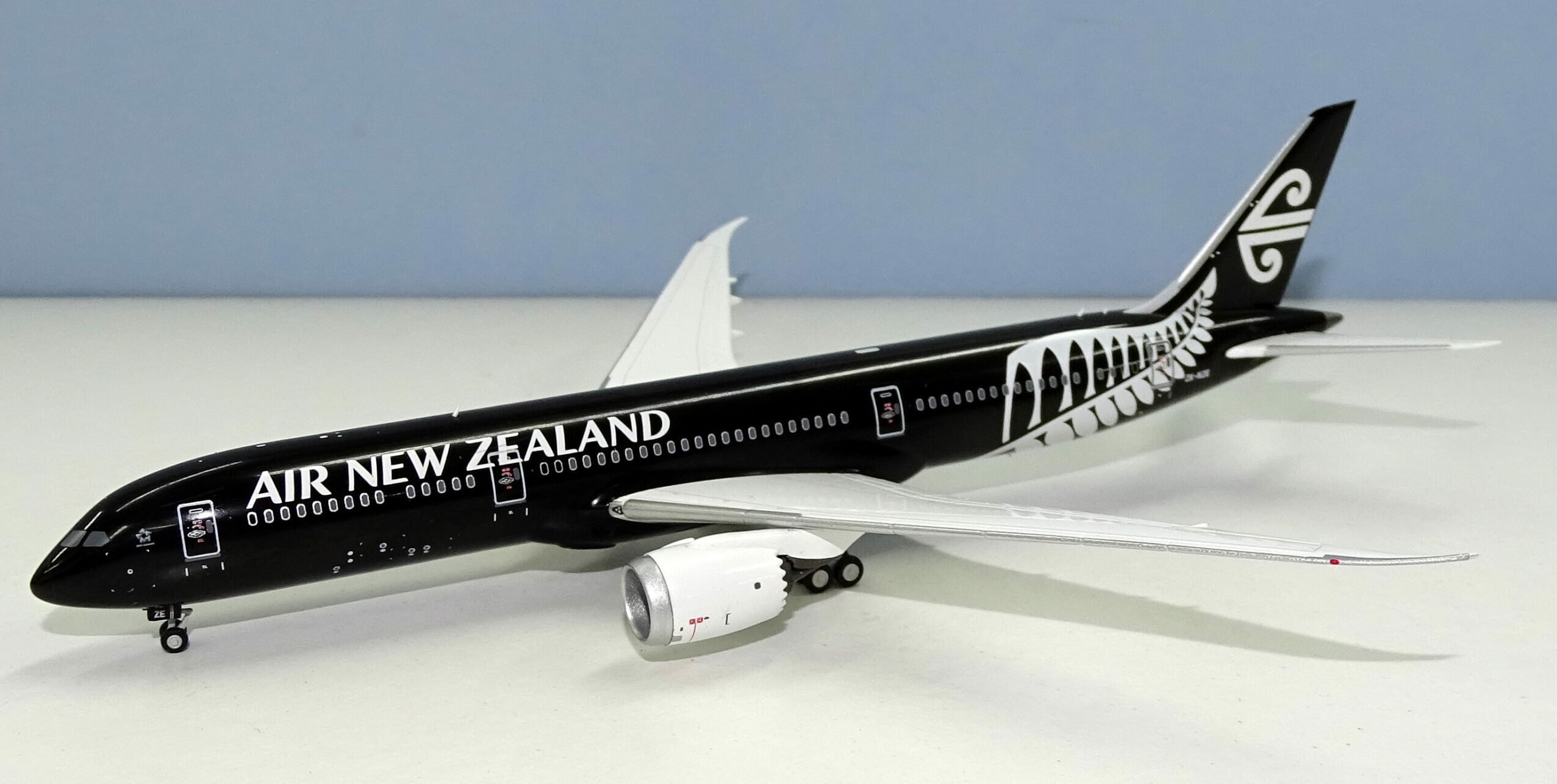 In the past three months NG Models have announced 9 787-9s and a single 787-10 for a total of 28 787s since they began with the mould. Phoenix in 2019 produced 18 787-9s and Gemini Jets only 4. It is harder to say how many JC Wings have been made since their announcements are so out of kilter with the actual releases, and they usually produce both flaps up and flaps down versions of each model. Nonetheless you can see that NG Models has become a major contender in the 787 arena in 2019.

Phoenix and Gemini Jets should be concerned as both of their 787s are so inferior to the NG Models product. Only the JC Wings 787 offers any real competition and indeed it is a very strong competitor, arguably superior depending on your point of view.

When I did a detailed mould review of the competing 787 moulds the NG Models version won in my estimation, however the difference between it and the JC was miniscule and came down to within the range of a margin of error. Basically, both moulds are outstanding.

The primary area of contention, as noted by others, is the undercarriage. The NG Models mould has always had slightly taller landing gear. This gives the NG Models version much better, and more accurate, engine ground clearance but the gear length of the JC Wings was more accurate. It seems NG Models have tried to resolve this by shortening the nosegear slightly. That has improved the nosegear, but by not also shortening the maingear the model now sits slightly nosedown.

It is more obvious on some models than others and on this Air New Zealand version I do think it is quite obvious. I agree that the NG maingear is too long (probably by about 1 mm). It isn’t enough to stop me from buying NG 787s but if JC Wings could get their models out on a reasonable schedule I may well choose the JC over the NG.

Both the JC Wings and NG Models 787s are exceptional castings and we are lucky as collectors to have the choice between them, or at least we should be. The reality is that JC Wings takes literally months to release models it announces, whilst NG will have theirs out the month after the announcement. The gap between the moulds isn’t big enough for me to not purchase the NG version.

The first ‘All Black’ livery was the ‘Crazy about Rugby’ livery that was first applied to an A320 in 2011, and subsequently to a 777-300ER and a Beech 1900D. Arguably this livery, with two ferns, one of which was sensibly silver, and a smaller Koru, was superior to the black version of the new standard scheme worn by this 787 and several other newer fleet members. Personally, I prefer the shape of the ferns, the silver fern and black engines of the original. This version with the ‘Crazy about Rugby’ titles removed but clearly still derived from New Zealand’s Rugby affiliations is nice, but the black and white fern looks odd to me.

This version of the scheme has simply two tones – black and white so as you’d expect there are no issues with the colours of the model! Once you have the colours correct the rest of the livery is actually very simple with just the position of the fern providing a possible banana skin. This slip up is easily avoided by NG and the fern is excellently placed, shaped and sized.

The new typeface of the Air New Zealand titles is also accurate, minor details like the alliance logo, rego under the wings etc are all present and the wings and engines are correctly white. There are really no issues with the presentation of this scheme on the model.

Printing quality on the model is impressive but it is here that NG almost become a victim of their own success. No other manufacturer has managed the fineness of printing that they have achieved (although JC Wings and Gemini are close). Nonetheless looking at the real aircraft the nosecone wing is quite evident and outlined in white. The detail is present on the NG version but is so finely printed that it isn’t as visible as it ought to be. There has also been criticism of the cockpit windows on NG 787s. Here I think they are quite good but they may be slightly too small. The rest of the model is exemplary on the print front. 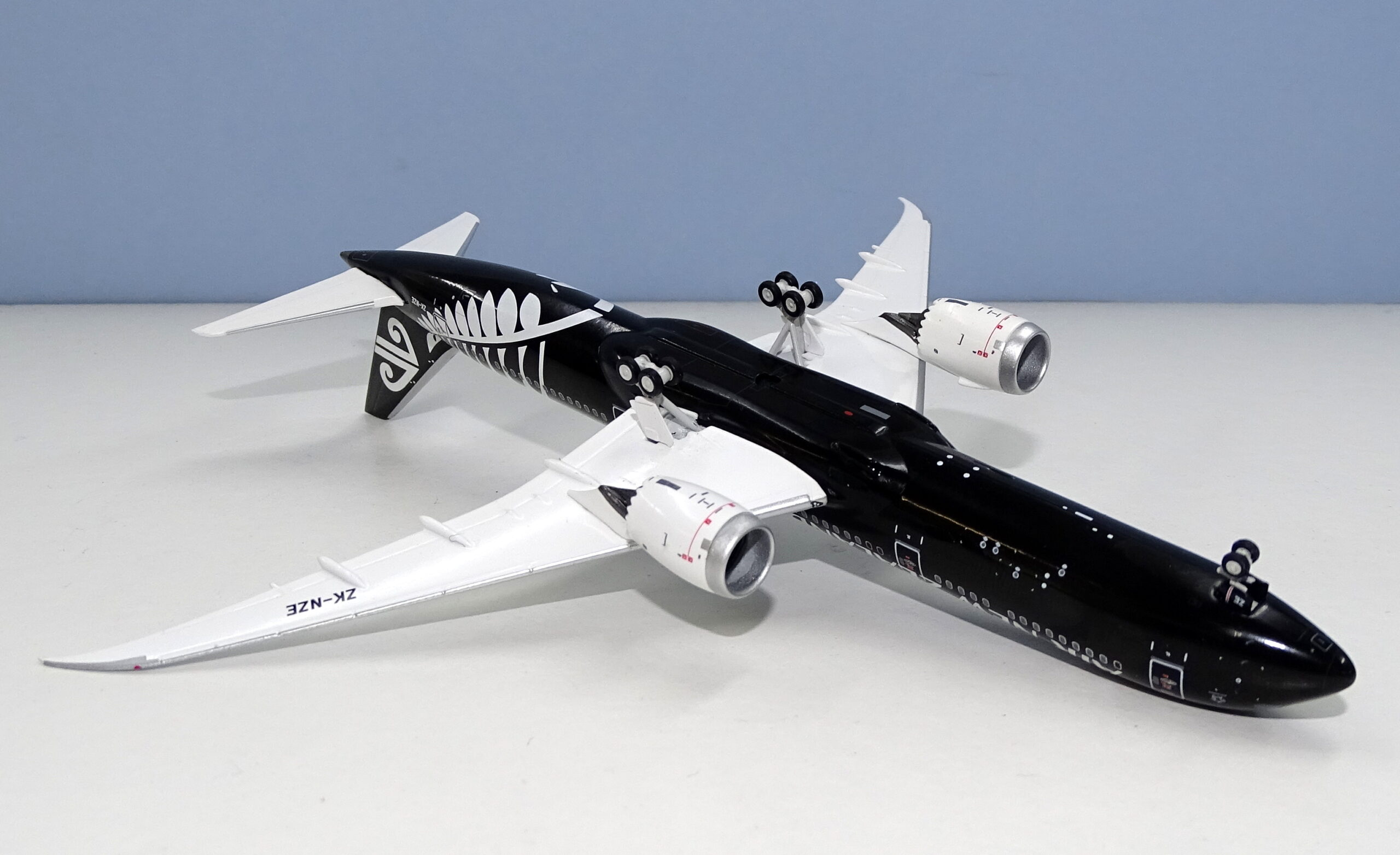 Likewise build quality is top class. I hear complaints about NG Models coming with not enough glue on them and I don’t doubt they are true, however of the over 50 NG Models I have acquired this year there have been no major issues in this department so I can only say that it doesn’t appear to be a major issue. Certainly, it is less of an issue than with everyone else.

It’s another NG review where the model is close to scoring maximum points. What can I say? Their models are almost always very good. NG are certainly not faultless but they have introduced a level of rigour to the hobby that has not been consistently shown by any of the other manufacturers and that can only be a good thing. This is the third time this aircraft has been portrayed in 1:400 scale, but the older releases are from 2014 (both Phoenix and Gemini) and are hard to find plus they are on inferior moulds. So although you may not replace the older versions, if you missed out first time around this effort is a more than worthy substitute.

Chengdu Universiade: Sichuan Airlines Airbus A330-343 B-5945 by Phoenix

I admit I give Phoenix Models a bit of stick, and I continue to be perplexed why they appear so popular amongst collectors when most of the time there are superior alternatives. It isn’t like […]