NG Models grew in 2019 from a promising start-up into a manufacturer that changed the paradigm of 1:400 scale, and for me top of the pile were their new Tristars. So, it seems fitting that I start 2020’s reviews by looking at one of December’s Tristar releases since I have actually only reviewed a single L-1011 of theirs in the whole of last year. NG have certainly been making collectors of British Airways fleets happy last year. Not only did they make 9 different BA 757s but they also made 4 BA Tristars too.

During the mid-late 1960s the two flag carriers of the United Kingdom, British European Airways (BEA) and British Overseas Airways Corporation (BOAC), where effectively at war with the British government over their aircraft purchases. BEA wanted to buy 727s and 737s, but was instead forced to acquire One-Eleven 500s and Trident 3s, and BOAC had spent a good chunk of the 60s taking aim at the VC10 and trying its best to acquire Boeing 707s instead. This unpleasant state of affairs would continue into the early 70s even beyond the formation of the board of the new British Airways in April 1972.

The purchase of BEA’s first widebody was no less contentious and political machinations saw BEA forced to flip-flop between the BAC Two-Eleven, Airbus A300 and then BAC Three-Eleven, before the latter was cancelled in 1970; partly because, ironically, the newly elected Tory government was being forced to support the troubled Rolls-Royce and so lacked funds to support a new British airliner.

That left BEA with little option but to look to the USA since it seemed completely disinterested in the European Airbus A300, which although not technically involving the UK as a partner (after it withdrew from the programme in 1969) still had Hawker Siddeley developing and making the wings under their own steam and at their own cost.

The result was that the new BA Board placed an order for the Rolls-Royce powered Lockheed L-1011 Tristar on September 26, 1972 for six aircraft with 12 further options. A Tristar was demonstrated at Farnborough in BEA hybrid colours, but by the time they were delivered British Airways had come into being as an airline and the first aircraft wore the new Negus & Negus colours.

The first aircraft to arrive was G-BBAE, delivered on August 30, 1974 but in keeping with British Airways of the period industrial action meant the L-1011s didn’t enter service until 1975. G-BBAI, named the Molly McGredy Rose, was the second to last of the first six Tristar 1s, which were followed by 3 Tristar 50s, 6 Tristar 500s and 8 Tristar 200s.

The early Tristar 1s lacked the range required for services to the USA and Asia and were effectively replaced by the longer-legged Tristar 200s. Four of them were transferred to British Airtours in the early 80s including BBAI, which moved to the charter subsidiary in April 1985. Unfortunately, the start of her service was not auspicious as only a month later (May 27) she was involved in a major accident whilst landing at Leeds Bradford (see here for a great photo). Returning from Palma the captain overshot the end of the runway. The aircraft came to a stop only metres from the landing light pylons, down an embankment with the nosegear collapsed. Passengers and crew were able to exit using the emergency slides.

Fortunately, even though the damage to the fuselage underside was heavy, G-BBAI was repaired. When British Airtours became Caledonian in 1988 she was renamed Loch Inver and then served with them until May 1999 when she was retired, aside from several leases to Worldways Canada in the late 80s and 3 months with Air Algerie from June 1990.

I’m not going to hide the fact that this is one of my favourite castings in 1:400 scale. As soon as I saw the prototypes, way back last April, I knew it was going to be great and generally my detailed review of the sample models still stands, although there have been some improvements made.

To summarise what I said previously, this is the first Tristar mould to accurately portray the dolphin like nosecone of the type. Nobody else has come close to this level of accuracy, which is evident throughout the entire mould. Nowhere is this clearer than at the tail region, which is beautiful. 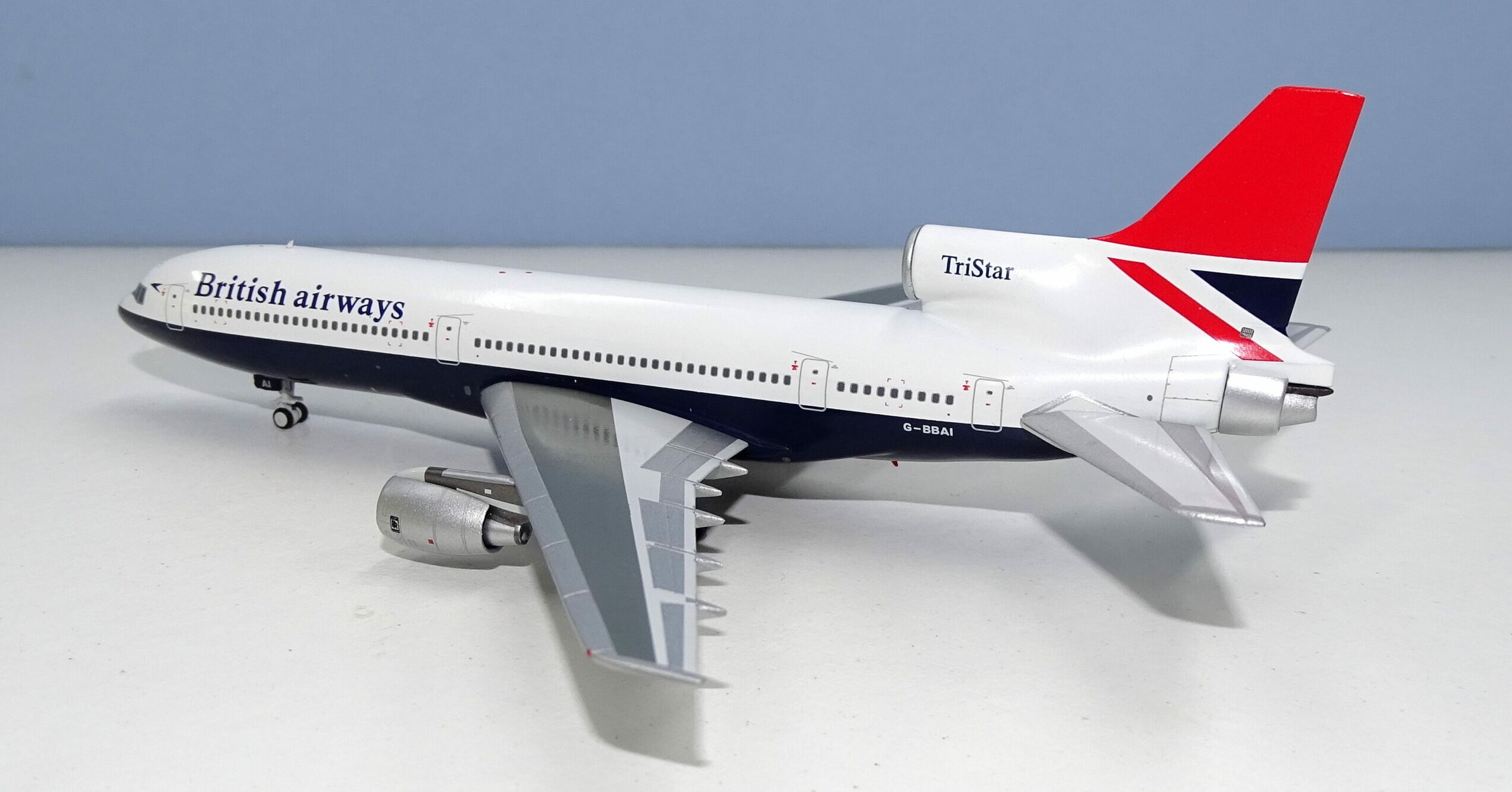 All previous moulds make some errors at the tail, whether it is the size and shape of the no 2 engine intake (Blue Box, Lockness, Witty Wings) or the detailing and shape of the exhaust (old Gemini, Lockness, Dragon Wings). The NG is alone in getting the entire region accurate and the finish and fit of the engine intake cone and the exhaust pieces is the icing on the cake.

The wings are well angled and very well detailed as is the wing/fuselage join and fairing. The engine pylons were an area modified prior to the first production release and look excellent. One minor criticism is that the angle of the engine rims isn’t quite correct as they should be slanted not straight.

One of the other areas that makes this mould stand tall, quite literally, over the JC Wings and Lockness moulds is the undercarriage. Not only is it in the right place but it is a nice height. On both the competing moulds it is too short. The gear is excellently detailed but the maingear doors could do with a stronger angle at their rear.

It has been a long time coming but this is the definitive Tristar mould at this scale. In a detailed review of the two other Tristar moulds I wrote the JC Wings / Gemini scored 29 and the Lockness 24 out of 40. A quick scoring using the same criteria for this mould gets it a 38/40, which surely by my scoring criteria for these reviews is effectively full marks. 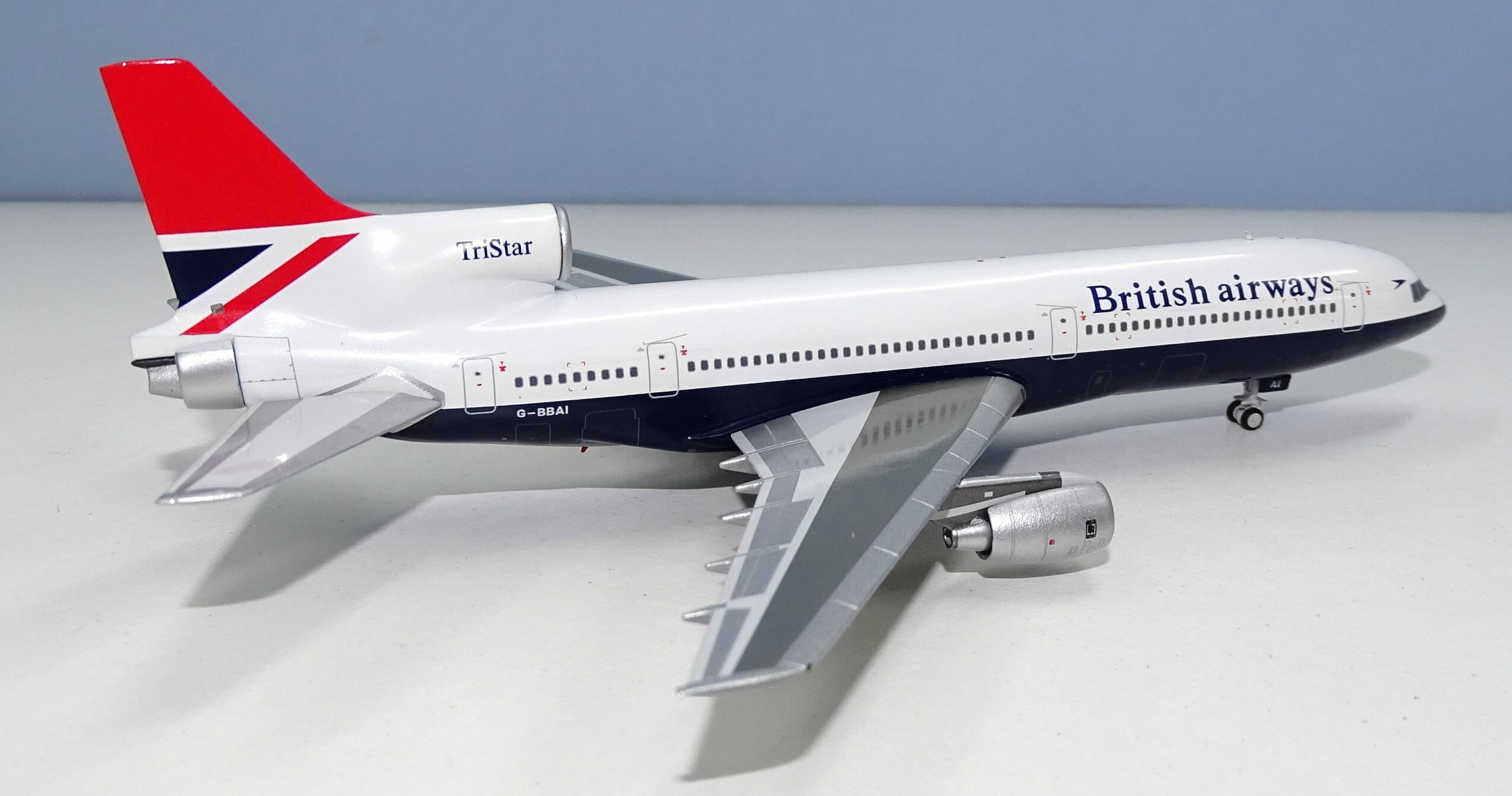 The original Negus & Negus designed British Airways livery is a classic that has to some extent defined every BA colour-scheme that has followed. It nicely combined elements of both BOAC (the speedbird) and BEA (the quarter jack) into a fresh new identity. The Tristars wore the scheme especially well. Although in later years the L-1011 fleet would gain the names of various types of Roses it doesn’t appear this happened until after the transition to the modified short titles BRITISH Negus scheme in 1981. All photos I have seen show BBAI nameless whilst wearing this livery.

NG Models have the dark blue and light red spot-on. The blue belly and speedbird logo are well positioned, and the main titles are accurate. The Union Jack on the tail is likewise printed to perfection with the elements of the jack stopping and starting accurately. If I am searching out a criticism then the TriStar titles on the number 2 engine are about half a mm too high.

This is a crisp and well rendered livery. I should of course mention that the sister model to this one had an issue with missing dots above the British titles on the starboard side, but at the same time, in keeping with NG’s good service, as soon as this was noted it was remedied and replacement models have been dispatched. Anyway, that isn’t this model and there isn’t enough here to warrant dropping a full point. 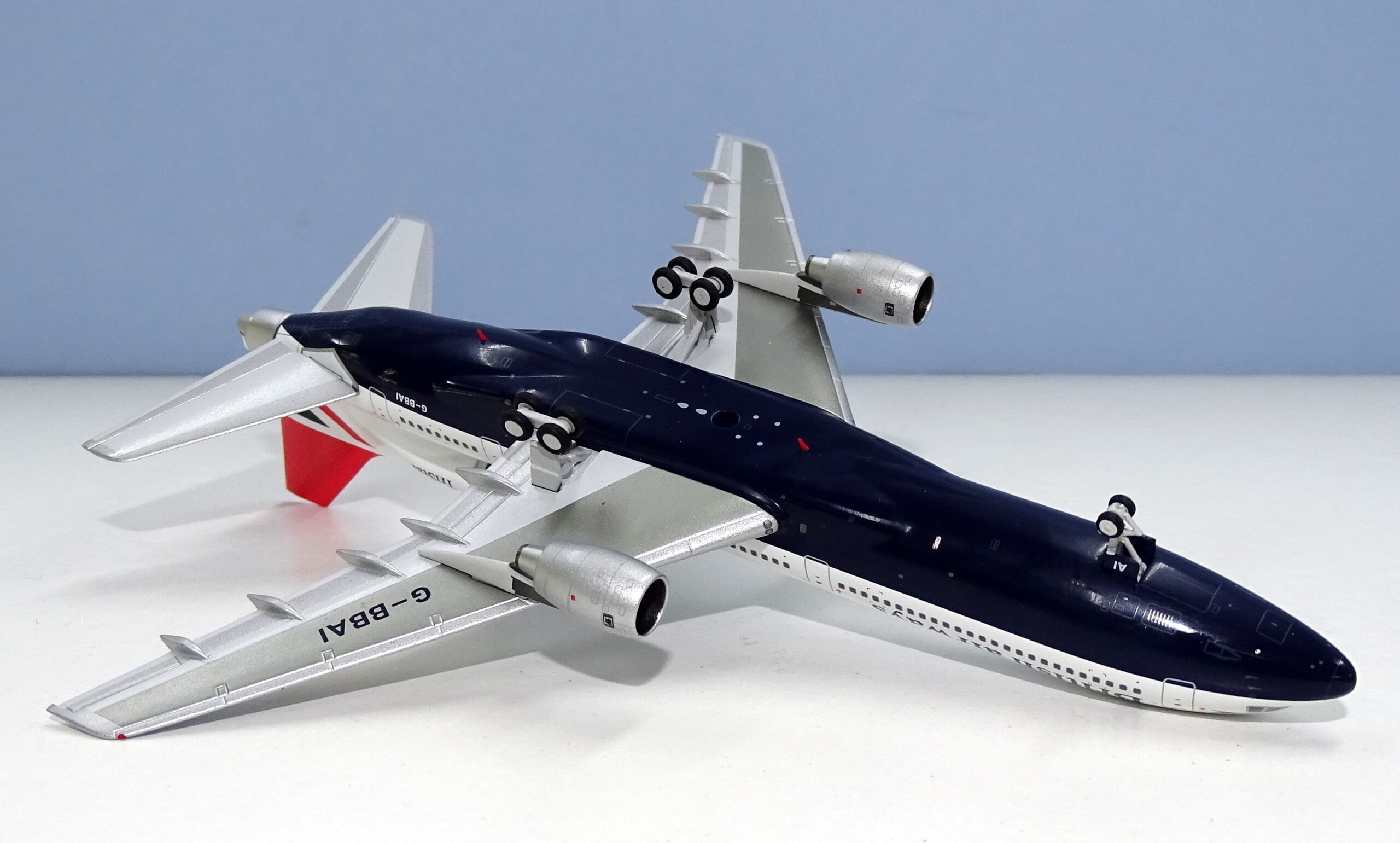 NG Models continue to be leader when it comes to printing fineness, detail and quality. The complex L-1011 benefits from this attention to detail with some amazing linework especially on the fuselage underside. This is faultless work. A particular highpoint, for those excited about such things, is the way the engine rims transition seamlessly from silver to a dark titanium and even with the dark colour the fanblades keep their silver edging but also have black between them.

Build quality is also of the highest standard and I have no complaints. Once again it is worth pointing out that NG did make a mistake with about half of the batch and their workers used the wrong Tristar mould (they used the Tristar 200 not the Tristar 1). This was caught before models were sent out and so isn’t a production error so to speak and once again doesn’t impact the model under review, which uses the correct casting.

This is my second NG Tristar review and the second to score full marks. It is one of the reasons I haven’t been reviewing the Tristars much, as perfect reviews don’t make as interesting a reading as ones full of criticism. The Tristar mould isn’t 100% perfect but it is about 96% perfect and the quality of the rest of the product makes NG’s models standout. The only worrying factor is that there have been mistakes beginning to creep in to the build process, although they have largely not escaped the factory. NG have said they will be expanding production in 2020 and hopefully they can keep a lid on these issues during that process. Regardless it is a testament to them that they have owned up when mistakes have been made and dealt with collectors in an honest and welcoming manner.

The range of cool 757s that collectors on the Diecast Aircraft Forum have come up with as suggestions for Boeing 757s for NG Models to make is impressive and long. Still NG in their customary […]