Some airlines in 1:400 appear to be particularly sought after and have a premium on their models. These are usually well-known flag carriers from countries with a long history, strong identity and a personal following. I’m thinking of Qantas, Singapore Airlines, Cathay Pacific, Aeromexico and VARIG. Models from these airlines are usually heavily sought after, especially if classics, and expensive on the second-hand market. The airlines also mainly have good coverage in 1:400 but there are still a few gaps and Aeroclassics has recently filled one of the last for VARIG with a 767-200.

Considering the close similarity of the two competing mid-range widebody products from Airbus (A300B4 and -600) and Boeing (767-200/300) it is interesting how many airlines have at times operated both of the aircraft types, often at the same time. For example, Air France, American Airlines, Egyptair, China Airlines and Kuwait Airways. Japan Air Lines, Qantas and China Eastern did also but none bought both types new and all received one of them through merger. VARIG is another airline that joined the select group who flew both A300s and 767s.

VARIG had taken the last pair of a six aircraft order placed for its subsidiary Cruzeiro do Sul and the ‘Silent Giant’ did well, especially as they could operate into the short runway São Paulo Congonhas airport. Boeing wasn’t about to rest on its laurels and let the A300 increase its footprint in South America anymore and since VARIG wanted to be able to use the widebody on longer routes to which the baseline B4 variant was not well suited it found an avenue for its own product.

The Boeing 767-200ER was better suited to longer international routes as it had longer range than the A300, whilst the opening in 1985 of the new São Paulo Guarulhos had removed the runway constraints that favoured the Airbus. VARIG acquired six 767-200s at a very favourable price after initially trialling a pair of ex-Braathens 767-205ERs from June 1986. This was about the same time that the airline introduced the cartoon character Variguinho as its mascot.

The 767-241ERs tookover many of the shorter lower density Latin American routes and were also used for charters to Europe. The 767-241ERs were technically leased from GPA (later GECAS) and remained in the fleet until near the end of VARIG’s tenure. They were returned to the lessors in 2003/2004. Four joined TAMPA Cargo after conversion to freighters and the other pair were leased to Nigerian airline Bellview after storage at Goodyear. VARIG acquired 6 767-241ERs and 4 767-341ERs, but also leased 3 other 767-300s and the type remained an important component until near the end of the once great airline.

I admit to not being certain of the need for another 767-200 casting, however releases had been few and far between and the only other active mould, by Gemini Jets / JC Wings, was an old updated cradle mount. The Aeroclassics mould is getting plenty of usage and generally is up to the challenge. 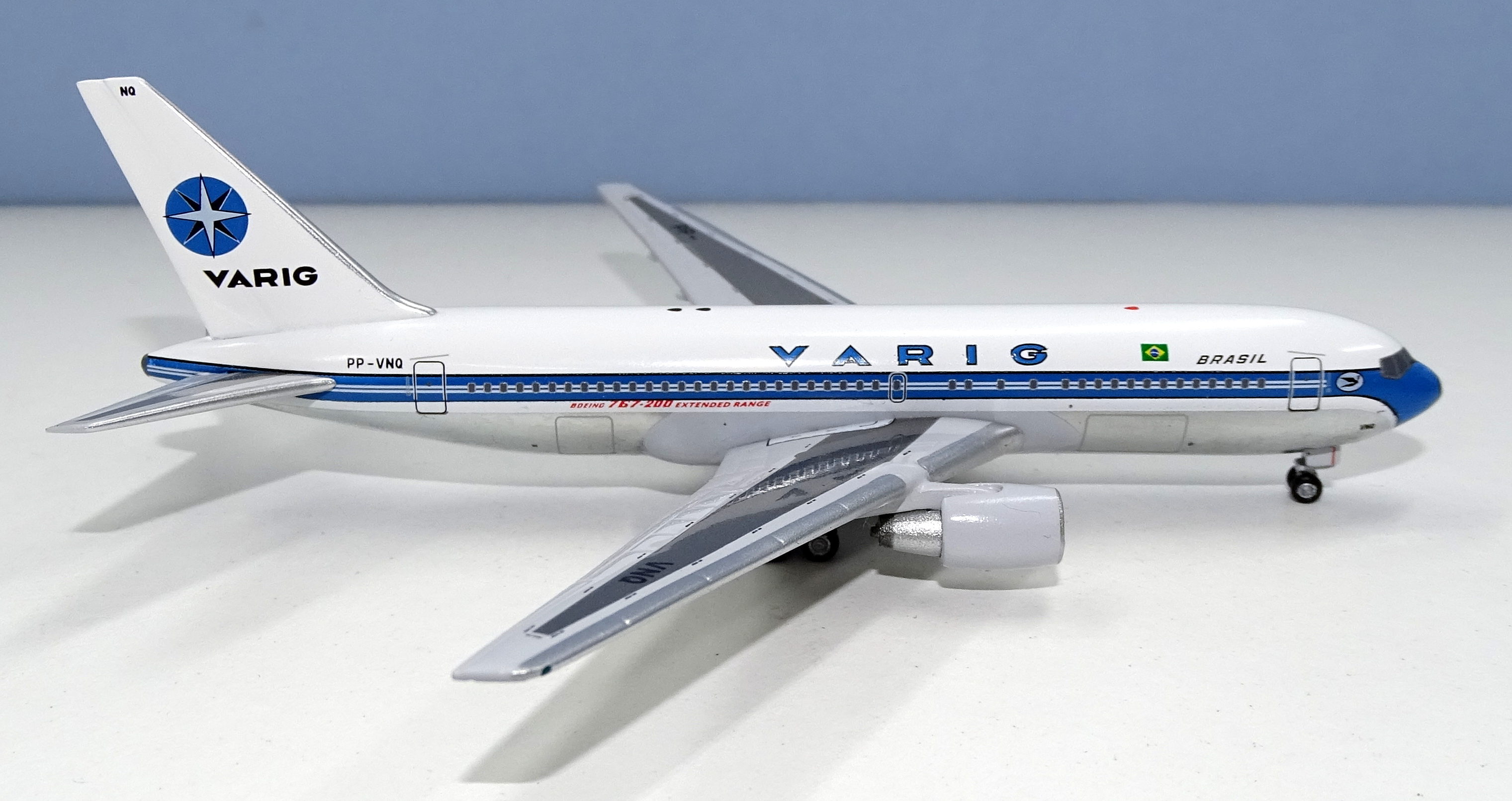 The fuselage shape is excellent, especially at the nose and tailcone. The blunt rounded nose of the 767 is re-created well and I can’t fault the tail region either. To be honest the Gemini Jets mould is also very good in these regions but the new Aeroclassics version does not have the substantial seam line around the wings. The Aeroclassics has a very tight wing/fuselage join and the wings are angled well.

Most short 767s never received Wi-Fi domes and had limited aerials so the customary lack of them from Aeroclassics isn’t a major. Nonetheless all three are missing (one up top, and one forward and backward on the underside). I do think they would improve the model but it is not a deal breaker.

Under the wing the engine pylons do not reach far enough to the rear but otherwise are well shaped and hold the engines correctly higher than the old Gemini. The engines themselves are decent representations of the CF6-80C2B2 at the nacelle but should have a longer exhaust without the cone being visible.

Aeroclassics has finally recognized it needs better tyre hubs and the 767s have wheels which are not just tyres on a metal rod but have accurate tyre-hubs. It is a major improvement, although the nosegear tyre is now a little too large. The maingear is nice but the doors aren’t particularly accurately shaped. 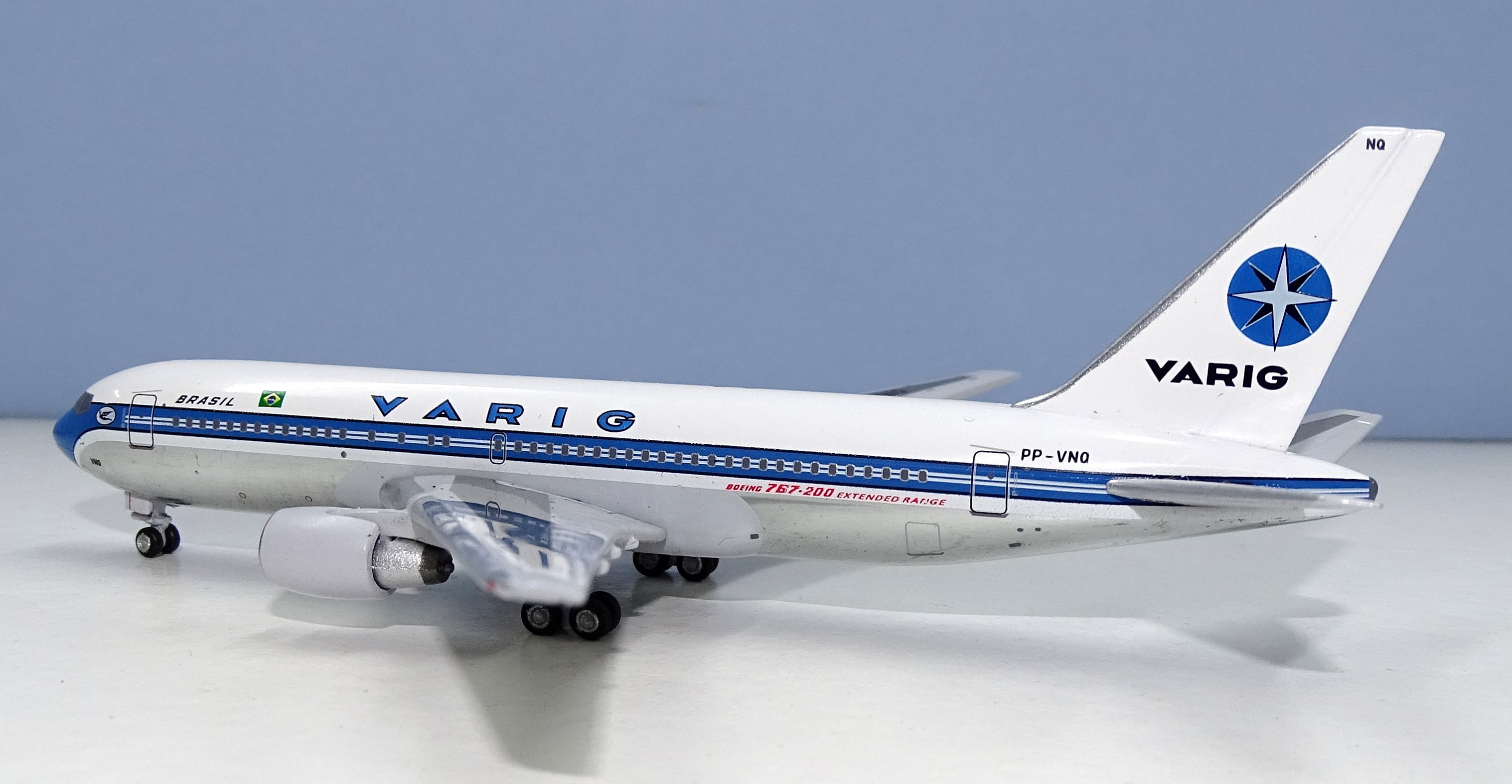 The Aeroclassics 767-200 is on par with or superior to older Dragon Wings and Gemini versions, however it isn’t light years ahead. The nosegear is slightly too large, the maingear doors incorrect and it lacks aerials. These are all relatively minor considerations however and I can highly recommend it as the base to grow your 767 collection, especially when such interesting subjects are being made. 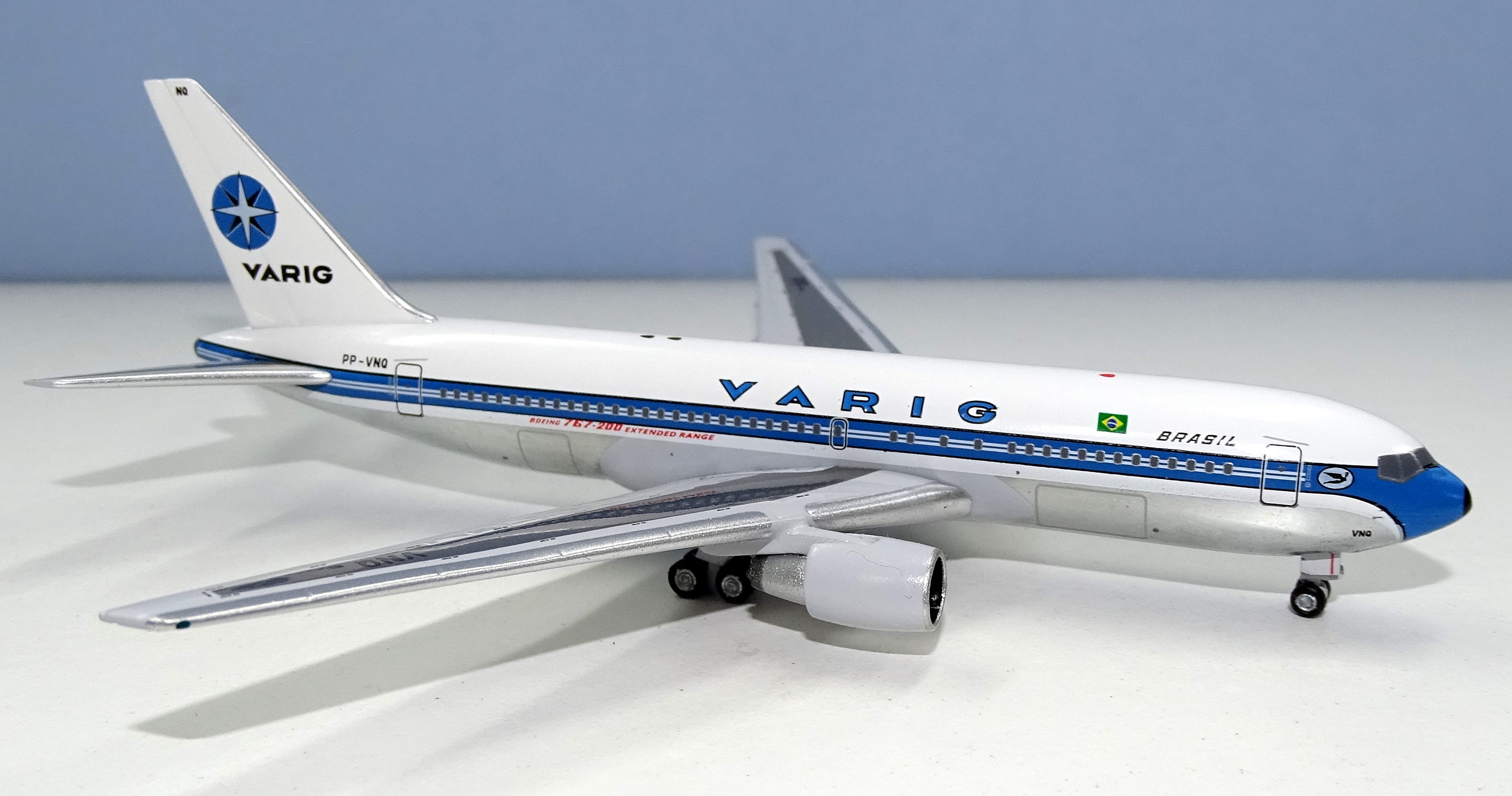 The VARIG livery of the 1980s was essentially the same as that of the 1960s and even in the 80s had a rather retro feel, partly due to its unusual seamed cheatline. The tail logo featured the airline’s long-standing compass logo with the flying figurehead also shown inside the forward cheatline. It is a scheme with a lot of little details. The primary base colour is an unusual medium blue. Aeroclassics has made many VARIG models but a recent DC-10 got this colour too dark. Fortunately, this mistake has not been repeated here. 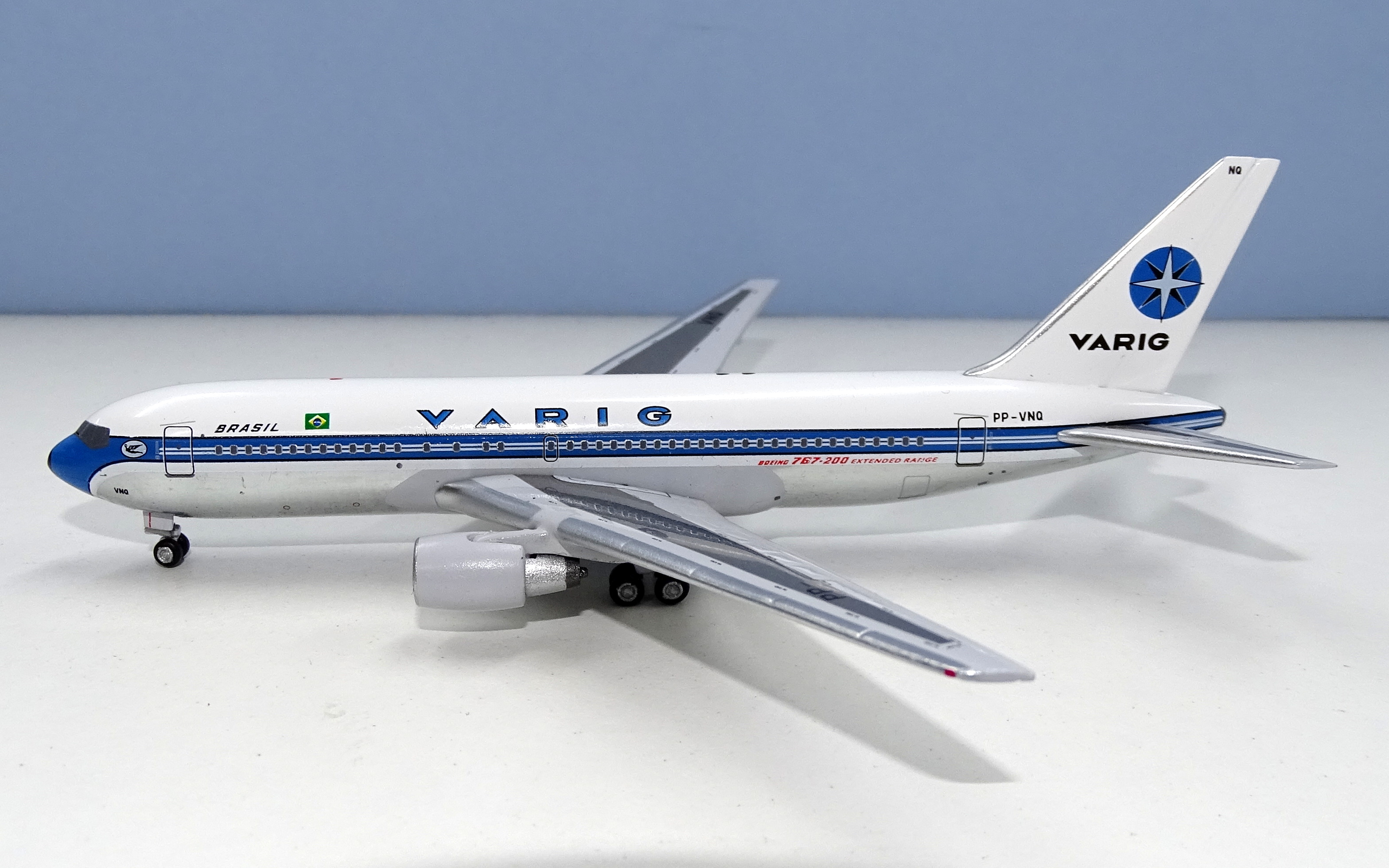 Starting at the nose the small black nosecone is present and the complicated cheatline well positioned and printed. The last three characters of the registration are correctly shown on the lower forward fuselage rather than the more usual nosegear door position.

The titles are well sized, although perhaps slightly too darkly outlined, and the Brasilian flag and italicized BRASIL titles also correct. The tailplane has a good compass logo and titles. Lastly the BOEING 767-200 EXTENDED RANGE titles under the cheatline towards the rear are good, but slightly too close to the lower margin of the cheatline on the starboard side. 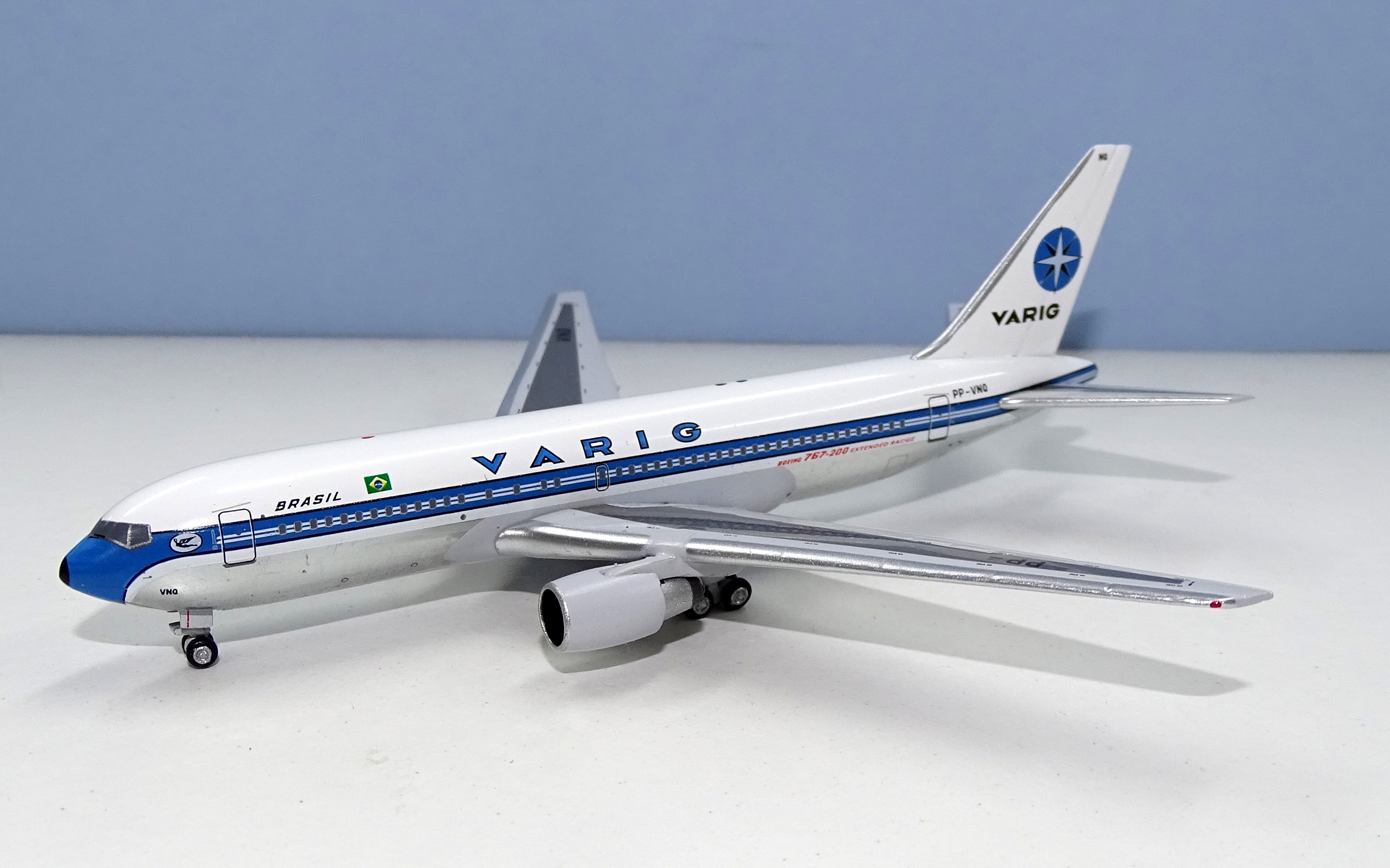 There are a couple of minor niggles with the livery application. Both the background of the flying figurehead and the central compass should be bright white but instead are kind of grey, a result perhaps of overprinting the blue behind? Also, on the starboard side the VARIG fuselage titles don’t quite match up with the correct position. The R should be over the emergency exit. This is a trivial issue. All in all, the livery is a success but a little more finesse would make it a triumph. 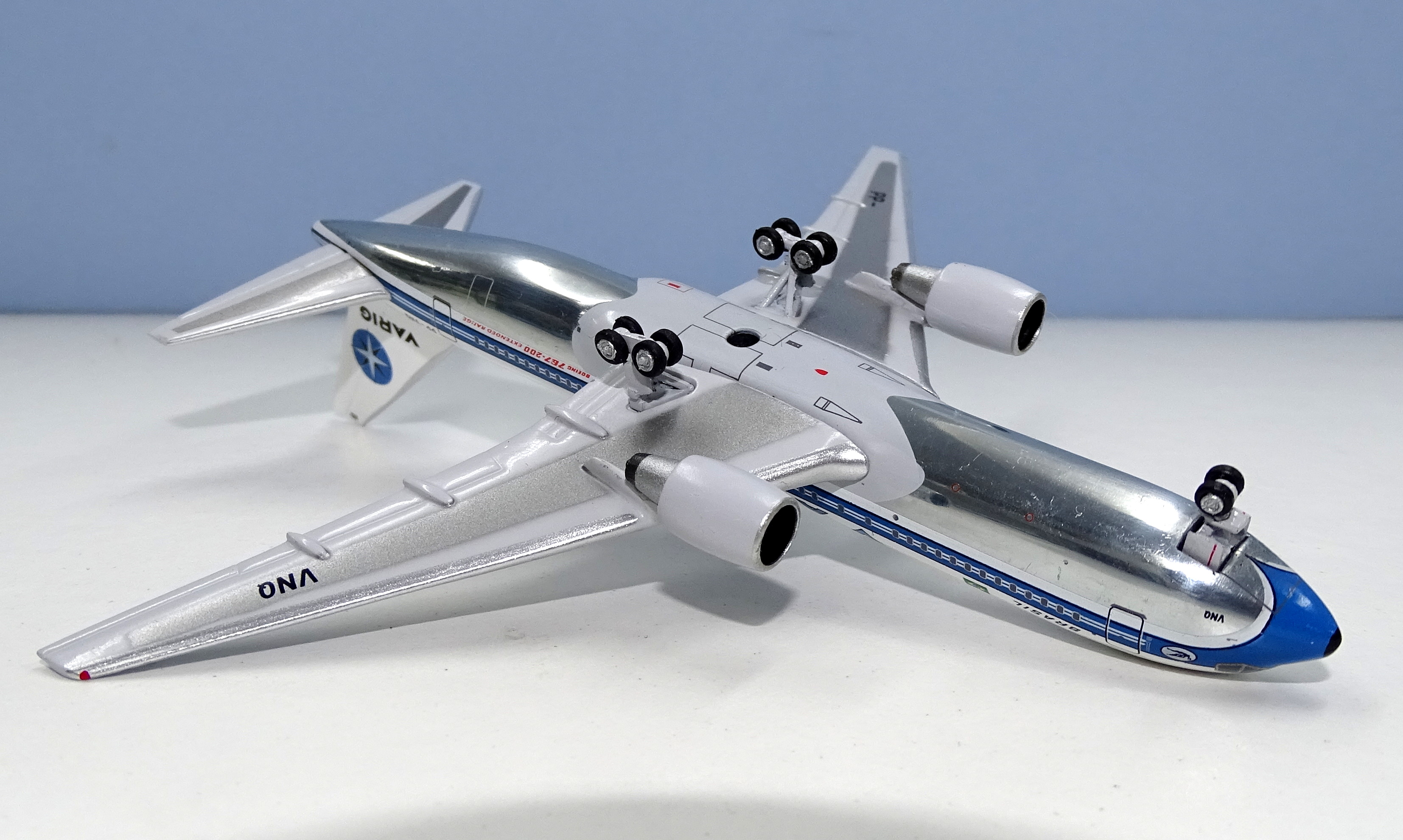 Aeroclassics has been working hard to improve some printing issues with its template that have been seen on earlier 767 releases and the result is that three of the four issues I talked about in my last 767 review are no longer a problem. The passenger entry doors are a better length, the rear belly cargo doors are tall enough and there is correctly only one set of overwing emergency exit markings. The only printing detail missing is the navigation lights near the wing root.

Maingear undercarriage bay doors are now being printed as standard on the 767s and the tiny no-step markings on the wing are excellent.

Construction wise this model comes very well made. There are no loose or broken parts or unsightly flashing around the gear legs.

My understanding is that this release was made in quite limited numbers due to production issues and so it is guaranteed to become even rarer than many other Aeroclassics VARIG models and deservedly so. It is a very nice model, and the best reviewed 767 from Aeroclassics yet. There has definitely been an increase in quality of research with Aeroclassics in the past few months, which leaves me excited for some of the 767s I expect to be buying in 2019.

Inflight200 has announced a lineup of new releases for June and July. Two C130-H models (New Zealand Air Force and Japan Air Force) will be released along with the United States Navy C-9B Skytrain and […]