Piston liner or turboprop releases from JC Wings are nowadays rare as hen’s teeth, aside from the occasional ATR, so it is no surprise that this Electra dates all the way from back in 2008. I don’t usually review older models but since this is a kiwi aircraft and I was asked I couldn’t resist. Besides 1/400 could really do with some more prop releases.

The Lockheed L-188 Electra sold well in the Australasian market partly because the conservative Australian establishment practically forbid the purchase of Sud Aviation Caravelles (see “Aussie Electras Pt1: TAA’s Caravelle No Go” for more on this back story). In addition Qantas was an ardent supporter of the turboprop so in the end both Ansett and Trans Australia also purchased Electras, as did TEAL – the jointly Australia/New Zealand owned airline for trans-tasman operations. Lastly Cathay Pacific flew Electras down to Australia too making no less than 5 Electra liveries in the Australian market.

TEAL bought 3 new Electras to augment and then replace its Douglas DC-6s. The trio were registered ZK-TEA-C with TEB arriving in Auckland on December 22, 1959. She was named ‘Atarau’ (moonlight) in service and operated he first revenue service, to Nadi in Fiji, on January 1, 1960. TEAL became Air New Zealand on April 1, 1965 reflecting its now full New Zealand government ownership (NZ had taken a full ownership share in 1960). Sadly ZK-TEC was destroyed in a crash at Auckland’s Whenuapai airport on March 27, 1965.

The Electras were replaced on the prime routes by new Douglas DC-8s but remained in service especially from the capital, Wellington, which didn’t have a long enough runway for the new jets. In fact in 1970 Air New Zealand leased one of the ex-Qantas Electras, which became ZK-TED. In 1970/71 Air New Zealand and Qantas pooled their resources and shared the traffic on the Australia-Wellington services. Accordingly the Electras gained dual titles. This arrangement seems to have come to an end in 1972 following the completion of a 270 metre runway extension, which enabled DC-8 operations.

ZK-TEB was sold in May 1972 and was converted into combi configuration. She joined Nordair as CF-NAX in September 1972. They sold her to American Jet Industries in November 1977 and from there she joined Reeve Aleutian Airways as N178RV. She served a few leases but otherwise stayed with Reeve until their collapse in April 2001. Amazingly she is still in existence today, nowadays in air tanker configuration, as C-FIJX, for Buffalo Airways. At present she appears to be stored.

By the way there are plenty of better shots over at Aussie Airliners of ZK-TEB but they are all copyright protected quite strongly. Check them out here: http://www.aussieairliners.org/electras/zk-teb/zkteb.html 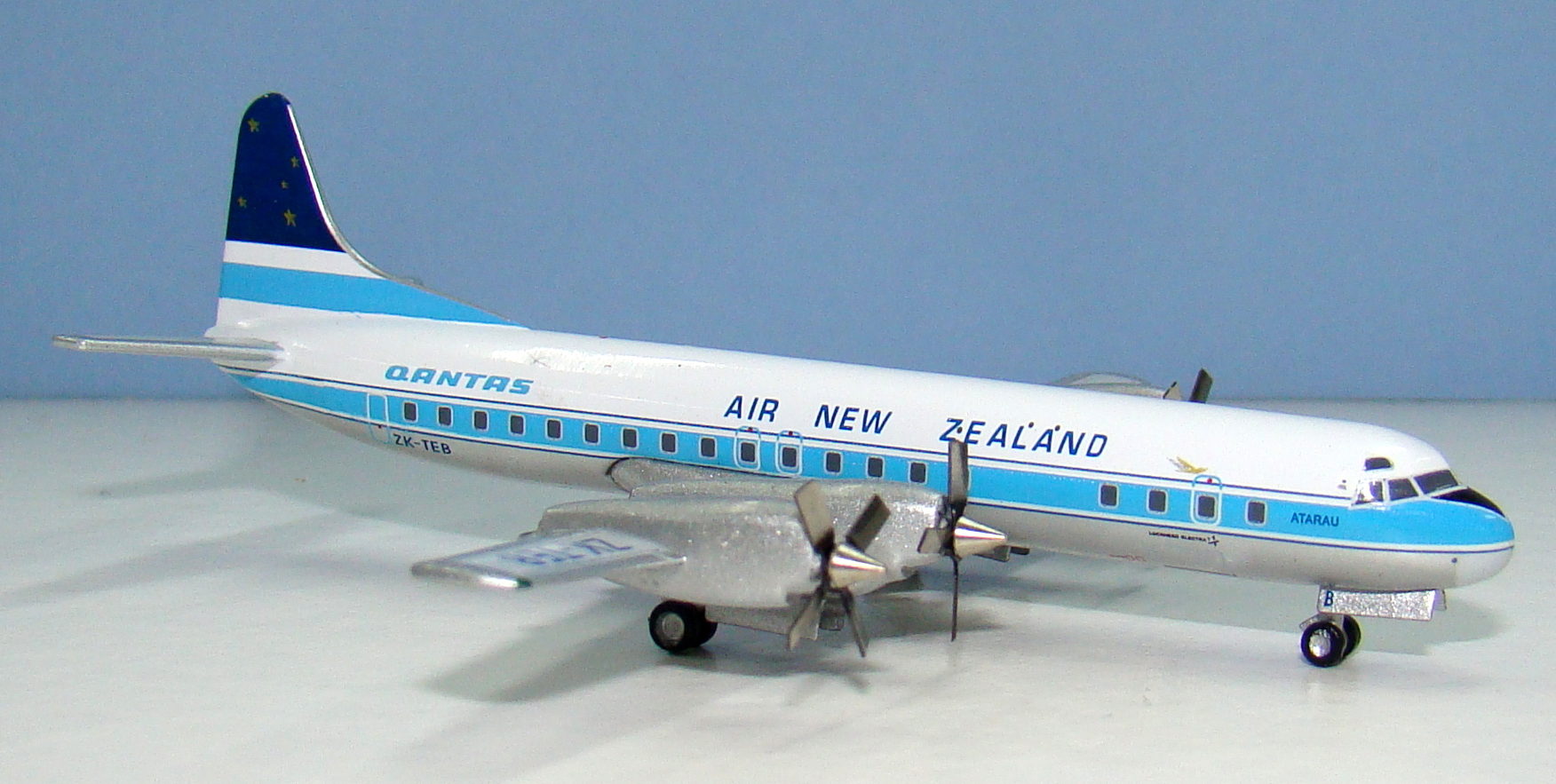 The majority of Lockheed Electras made in this scale have been made by Aeroclassics, however there are three other moulds in existence including this one. As it happens I already own this exact aircraft and airline combination on the Aeroclassics mould and they make an interesting comparison in several ways.

The JC Wings mould is not seamless, as you would expect given its age, but the cradle mount and resulting seam are well done, fit closely and follow the angle of the real thing’s wing/fuselage join. Again the Aeroclassics wing root join is less accurate.

Moving towards the nose and it is well done and a good shape. The undercarriage is nice and all the wheels roll well, although the nosegear tyres are way too large. In fact in terms of just the mould shape this is clearly better than the competition and a nice example of the Electra. It is not faultless, the maingear legs for example don’t seem well placed compared to the gear doors and the model sits rather nose downwards, but overall it’s a decent Electra. Lastly I should mention that as this model dates from 2008 no antenna are present.

The hybrid Air New Zealand / Qantas livery basically was that of Air New Zealand with the tail titles removed and Qantas titles added just behind the rear entry door. The scheme is fairly simple with a light green cheatline with very thin bands above and below. The tail carries a dark blue top with Southern Cross stars and a lower green bar (which usually housed more titles but is blank in this case). A golden flying bird logo appears just above the forward cheatline ahead of the forward door.

Now the first thing to note with this release is that the colours are literally miles away from being correct. The dark blue is fine but the teal green is bizarrely a light blue on the model. There are plenty of photos of this scheme on Electras so the size of this error is unforgiveable. The Aeroclassics version of this model gets the colour (and other livery details) spot on (except for the black radome tip).

Unfortunately the colour isn’t the only area where JC Wings has made a mess. The cheatline is too low and its lower boundary almost sits at wing top level. This fault carries on all the way forward to the radome. The cockpit windows meet with it in the right place but only because they are grotesquely drawn downwards at their sides. I’ll discuss the cockpit windows further in the printing section.

The tail would be ok except for the blue colour and the fact the blue line is too thin and not actually straight on the model. Lastly the ‘AIR NEW ZEALAND’ titles are not thick enough. In fact altogether JC Wings have made a real pig’s ear of this model’s livery and managed to ruin the look of the mould in the process.

There are no printing quality issues visible on the model and in fact the detailing is very good. The aircraft name, small bid logo, cargo doors etc are printed well. The cockpit windows however are not. Both Jet-X and JC Wings, who used this mould, have major problems printing the cockpit. On an Electra the cockpit windows appear in a straight line from the side. On this model they crazily angle downwards to meet the too low cheatline. It looks quite poor and gives the Electra an odd appearance. One area missing printing that could do with it is the engines. On the model they are very silvery and it would be nice if there was some paneling visible on these.

Quality of construction on the other hand is top notch. There are no issues I can see. The props turn and the wheels roll.

There’s a good model fighting to get out of this release but sadly JC Wings has rather bodged it. It is a shame but the colour is awful and the positioning of key elements (cheatline and cockpit) incorrect. Even though my Aeroclassics version is using an inferior mould I much prefer it to the JC Wings release. This is largely academic nowadays as this is such an old model, but theoretically JC could still make more Electras, even though I doubt they ever will. If they do hopefully they’ll but more effort into the printing.

Aviation400 are the latest to throw their hat into the ring with a new A330 mould to compete against the existing castings from JC Wings/Gemini, Phoenix, Aeroclassics, Panda Models and NG Models. It seems you […]

Panda Models seems to have discovered the rest of the world outside of China in 2018 and they also appear to have been chided by competition into developing their own Airbus A321 casting, presumably in […]