The protection of Russia’s endangered big cats is something that has gained significant support, through no less than Vladimir Putin himself, so it is only natural that a state organisation like Rossiya is also supportive. Hopefully this is a benefit to the cats themselves but certainly it is beneficial to that other endangered species – the plane spotter. In this review I look at the 2nd of Rossiya’s big cat themed widebody jets.

Way back in April 2017 I reviewed Gemini Jets version of the Rossiya 747-400 (EI-XLD) so I won’t go over Rossiya’s history again in detail. It is safe to say however that they have benefitted from being part of the Aeroflot group, which they joined in 2010, as the surviving brand of three including Orenair and Donavia. They are now the primary operator of domestic services from St Petersburg and have taken over the mantle of Russia’s largest charter airline too. This was facilitated by the collapse of Transaero in October 2015, from which they acquired a substantial number of assets.

The yardsale of Transaero’s assets enabled Rossiya to acquire the leases for a variety of large widebodies including 747-400s and 777s. Five of the latter joined, made up of 5 former Singapore Airlines series 312s. The non-ER series 777-300 is certainly less valued in the secondhand marketplace than the ER variant, however it serves Rossiya’s need for a large high density (373 seat) people mover to holiday destinations just fine. EI-UNP was originally delivered to Singapore Airlines as 9V-SYB on December 17, 1998 so is now approaching her twentieth anniversary in service. She joined Transaero in May 2012 and operated with them until storage in October 2015. Her service with Rossiya began on August 31, 2016 and in their fleet she was named “Magadan” after the remote subartic Far-Eastern Russian city.

This year is “Russia’s Year of the Environment” and following the tiger livery Rossiya unveiled in September 2016 a second big cat themed scheme was unveiled this March, this time in support of the even more endangered Amur Leopard.

The Amur Leopard lives within the boreal forest of the Russian Far East in the Ussuri River Basin bordering China. The fact that its location can be so precisely determined is a reflection of its conservation status, with only 30-80 Leopards remaining. The species is the focus of conservation efforts by the organisation “Far Eastern Leopards”. The scheme takes a similar cat’s head form as the Tiger livery. The triple-7 itself has been renamed “Ussuryisk” after the town closest to the leopard’s habitat. The aircraft has gained the nickname “Leolyet”, which combines the Russian words for Leopard and flight.

The Phoenix Boeing 777-300 and 300ER have been the pride of Phoenix for some years and justly so. As I said in my review of the Phoenix 777-200 they have outlasted competing moulds from JC Wings / Gemini Jets several times. In general comments about the series 200 apply to the 300 and 300ER (the latter pair are differentiated by the wingtips).

The fuselage and vertical stabilizer are near perfect as are the wings (slot in not cradles) and horizontal stabs. The mould has been updated with aerials and satnav domes and they also look good. All four aerials are present whilst the small bump just after the wing is in good relief (although it’s almost obscured by the livery on this model). There is actually a fifth aerial on the real thing (on the rear underside) but it is so small I doubt it could be modeled in 1:400 scale.

Looking at the mould front on I do think the engines are a tiny bit too small, however it is a minor concern hardly worth mentioning. Even better, unlike the majority of newer moulds in this scale, there is the correct amount of ground clearance between the engines and tarmac.

One of the nicest features about the mould is the undercarriage. Phoenix usually have great gear legs and wheel hubs but on the 777 maingear it also has the nice feature that the triple wheel bogey can be moved up and down to simulate take-off and landing attitudes.

I have discussed Rossiya’s livery history in my post for the Tiger 747 but quickly to recap, the airline’s new livery was implemented in April 2016 to take the enlarged airline into the new era. It is a wonderful scheme based on aircraft contrails, made up of a series of red and white chevrons that change shape and blend into each other towards the rear of the aircraft. The airline also has a new R logo which features an aircraft at its top side.

Looking at the standard elements of the scheme and Phoenix have done well with the base colours – light grey for the fuselage and a bright light red for the engines, rear fuselage and tail. I’ve no complaints about the livery placement either. This is a complex scheme but the position of the chevrons matches those on the real thing as well as I think is possible. Initially I thought the satnav dome being whiter than the fuselage was a mistake but on the real thing it appears so too. 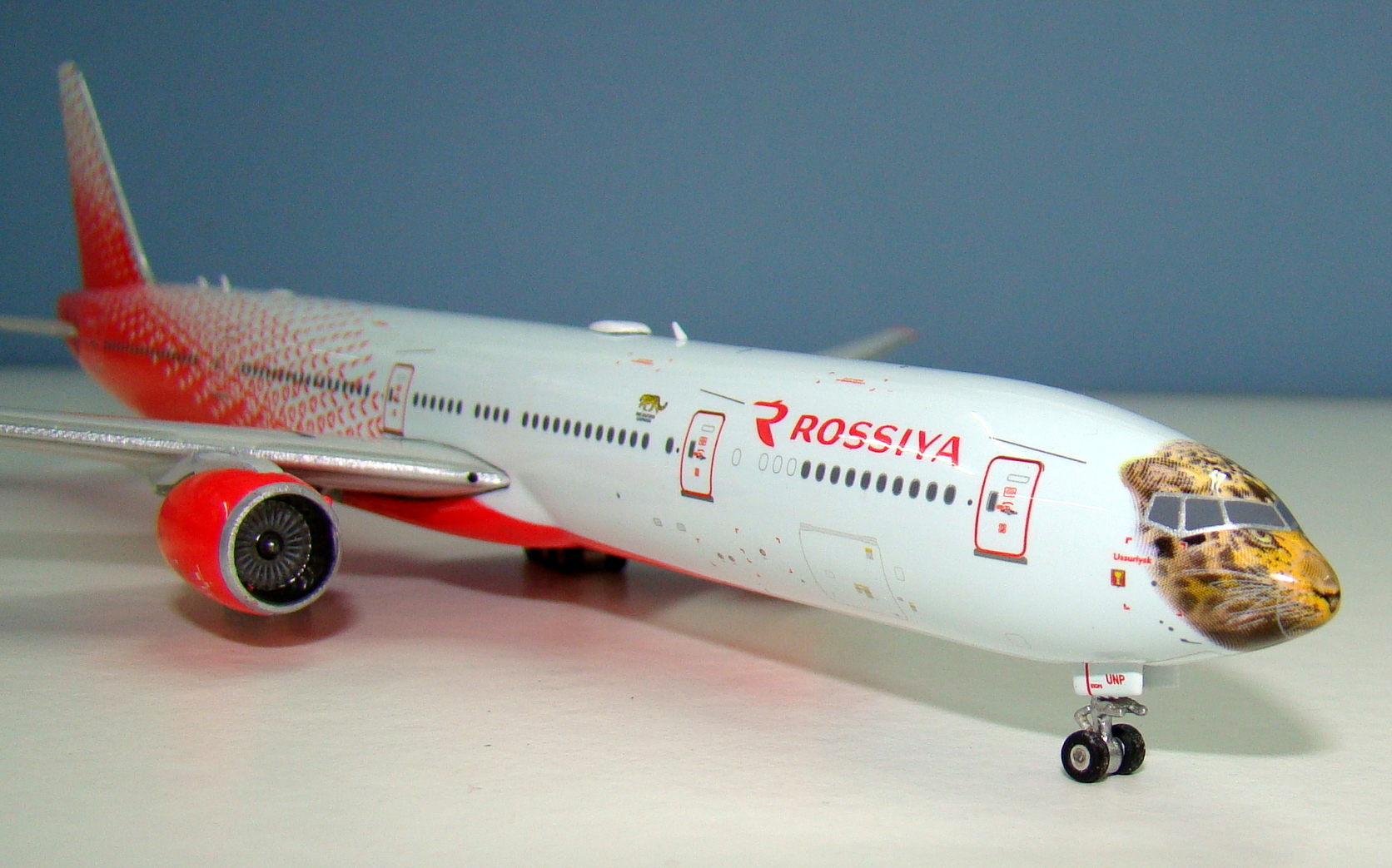 Of course the main reason people would buy this is for the leopard facemask and that, as with the Tiger on the 747, is pushing the printing capabilities to the limit. The “Far Eastern Leopard” organisation’s insignia after the main titles is very well printed but I can’t help but be a bit disappointed with the leopard face itself. The definition of the printing is a little hazy and the colours a bit off. On the real thing the leopard is a clearly demarcated base yellow with black spots. On the model the yellow isn’t bright enough and the spots are not well defined at their edges, at least in the cheek regions. 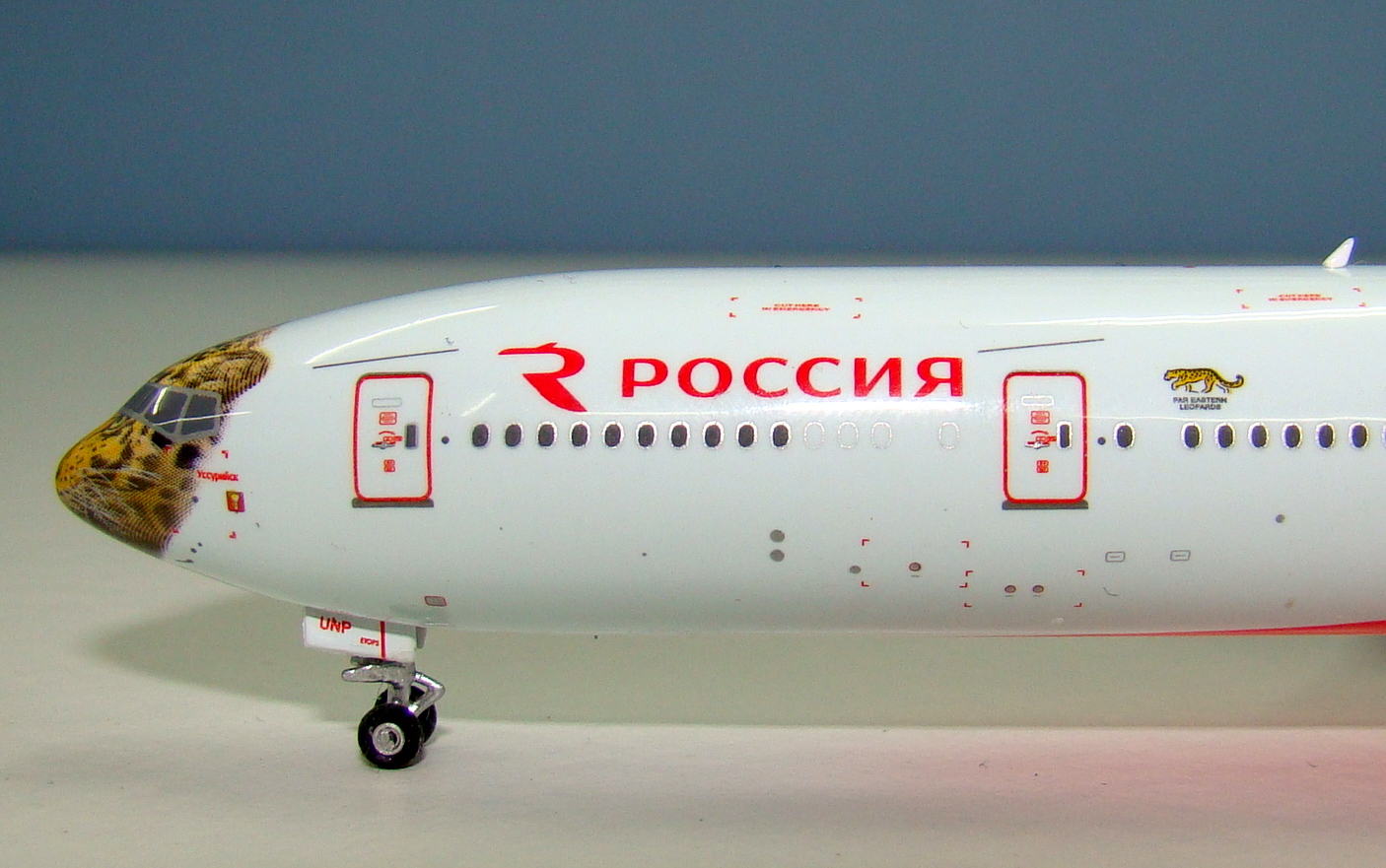 Phoenix have been printing the cockpit windows of their 777s too large for a little while now and, whilst it doesn’t make a massive difference on this model, the edge of the windows is right against the border of the leopard head edge when it should not be. From the front the printing is actually very good although you need the magnifying glass to see the fineness of things like the whiskers.

It is perhaps the eyes that are the weakest part, and also one of the most difficult to get right too, as the Gemini 747 also showed. The eyes are a bit too small but also not well differentiated from the rest of the face colourwise. The eyes in fact look like just another pair of spots unless you know what you’re looking for. The brown muzzle between the eyes finishes too low down also.

I am wary of being too critical of the leopard facemask as it is a real challenge and generally pretty well done.

Printing quality and detail on this model is excellent. Phoenix have even improved their printing on the underside to include such things as main gear doors! Ok that’s enough sarcasm, they have done a great job overall. Detail on the engine nacelles is particularly good. Also good is the colour of the engine inners and fan blades, both a nice dark grey with good quality silver rims. 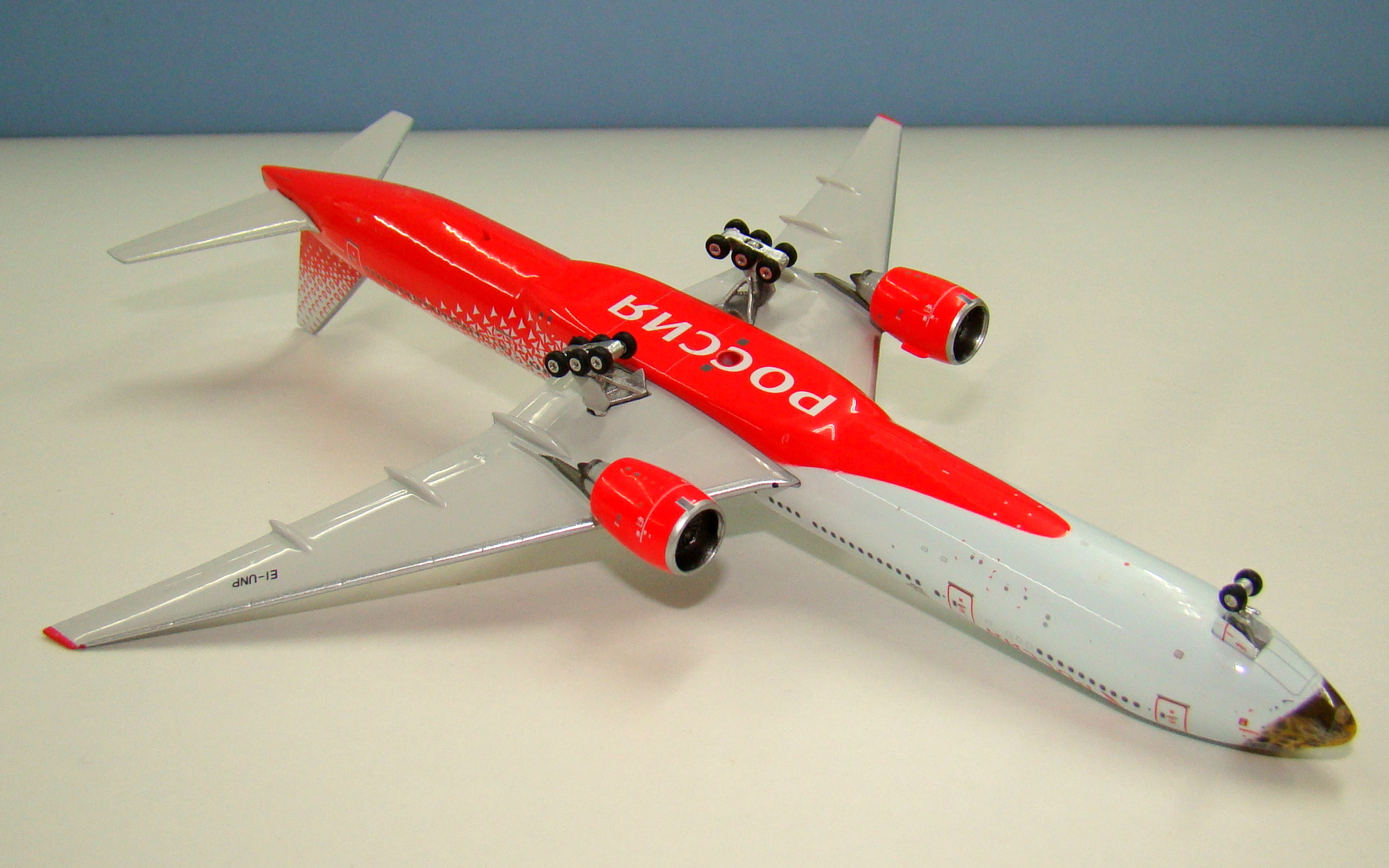 Construction quality is also topnotch. All components are fitted well and there are no major quality control issues. I am going to detract a single point for the maingear. The finishing on the starboard side gear door is a bit rough, although nowhere near as bad as on the Air Caraibes A350 I reviewed. Also both the maingear trucks have a tendency to point to the right.

The combination of, one of the best 1:400 scale moulds and a well rendered livery make this a very nice release. It is certainly well worth adding to your Russian collection. Hopefully the Amur Leopard can be saved and Rossiya can continue to support the conservation of the big cats of Russia. Phoenix have done their bit with this release, but it’d be interesting to compare the counterpart JC Wings version to see which is top cat.

2019 was an exciting year for Tristar lovers but it wasn’t all good news. The Tristar 500 was particularly poorly treated and in fact my lowest score for last year went to a Pan Am […]