Aeroclassics is the go to place for models in 1/400 scale that pre-date the turn of the century, and they reliably produce a wide range of interesting and noteworthy airlines on a wide variety of excellent moulds. Recently they’ve been utilising their excellent DC-8s and a few months ago focused briefly on the major supplemental airline ONA, releasing 5 of its DC-8s in various marks and liveries. The series 61 had previously been released by Gemini Jets way back in 2000 so a 2017 release makes an interesting comparison.

Supplemental airlines were originally called Non-Skeds – short for non-scheduled i.e. charter airlines. Following WW2 and during the 1950s there was a surge in new airline start-ups using war surplus aircraft and pilots. The CAB and the scheduled airlines took a dim view of these airlines, both from a safety perspective and because of their bending the rules and effectively competing against the Trunk airlines.

They were so successful in fact that they were the primary driver for the introduction of coach fares by the majors. Gradually the CAB and economics drove most of the hundreds of players from the market although the CAB, in 1955, had admitted they played a legitimate role and began to provide short-term supplemental air licenses. In 1959 the CAB gave certificates of public convenience and necessity to 23 of 53 applicants with 11 only getting rights for 2 years. One of the 12 whose qualifications were ‘clear and strong’ was Overseas National Airways (ONA), which had been formed in June 1950.

With the addition of some legitimacy the new supplementals grew well during the 1960s boosted by work supporting the US interventions in South-east Asia. ONA however actually went into Chapter 11 in 1964. It emerged stronger and with the financing to acquire both DC-8s and DC-9s. Nonetheless by 1970 it was back in the red to the tune of nearly $60 million, despite massive increases in revenue.

Throughout the second half its existence ONA operated a large number (51 in fact) of DC-8s of most marks. These included a substantial number of stretch DC-8-61/63s often on short term leases or conversely on lease to other airlines. Four stretch DC-8s were delivered new to ONA, but at least 7 gained the strong names that ONA typically applied to its fleet (in a similar fashion to British Eagle).

N867F was one of a pair acquired from Universal Airlines. She had been delivered new to them as N801U in April 1968 and served a five month lease to Capitol almost immediately. ONA acquired her in May 1972 and named her ‘Victorious’. She spent much of her career on lease to various other airlines such as Capitol International, Seaboard World and Korean Air. In 1977 she was sold to Flying Tigers and following upgrade to DC-8-71CF status she ended her career as N703UP with United Parcel Service on March 30, 2010.

ONA itself appears to have rarely made money despite its size and modern fleet. Only a few years after its colourful celebration of the US Bicentennial, and with deregulation of the US industry on the doorstep, it was decided to wind the company up. Operations ceased on September 14, 1978 but the assets of the company guaranteed a profit was made. Interestingly following its closure one of its subsidiaries, United Air Carriers, took up the ONA name and gave deregulation a go. It purchased the National Airlines name from Pan Am in anticipation of starting scheduled services but these never eventuated and it was bankrupt by 1986.

I’ve already reviewed a pair of Aeroclassics DC-8s but both were short variants (s series 40 and a series 50). If anything the stretch DC-8 moulds are even superior to the short ones. Aeroclassics only has competition in this area with Gemini Jets old 2001 mould (and Aeroclassics own earlier 2004 mould) and given the age of the mould it isn’t a lot of competition. To be fair the old Gemini mould is perfectly respectable but shows its age with simple gear, thick wings and a slightly chunky nose.

The fuselage and tail shape of the Aeroclassics mould are almost spot on. The nose intakes are a little hidden by the paintwork but are moulded in. The undercarriage of the mould is also superb with a well sized nosegear door set (unlike the updated Gemini mould) and well detailed and suitably slight gear legs. Aeroclassics tyres and wheelhubs are simply rubber rings on spigots but with the DC-8 it makes very little difference.

The wings and engines are another strongpoint. They are accurate and nicely detailed plus Aeroclassics has different sets for the DC-8-61 and DC-8-62/63, which do not share the same pylon / wing join structure. The wing seam on the mould is less obvious than on the smaller DC-8s and even less of an issue since it fits well and follows the correct contours of the fairing anyway.

The Stretch-8 can look a little ungainly with such a narrow fuselage and long body, however this mould shows off its characters almost perfectly. It is one of the finest moulds in 1/400 scale.

Overseas National had a very 1970s livery (which since they got it in the 60s I guess means they were ahead of their time). The cheatline connects with the tail and narrows towards the radome. ONA had an interesting logo of an aircraft inside a globe surrounded by the sun. The ONA initials feature prominently as do full titles. The airline’s name itself really doesn’t mean anything – if they’re overseas how can they be just national? Anyway it is typical of the sort of name non-skeds gave themselves to sound more important and could easily be the sort of non-specific name used when a movie needs a fake airline for a scene.

The primary colour of the scheme is a deep blue, used for everything aside from white titling inside of the blue tail and the aircraft name, which is red. Aeroclassics have got the colour correct and also the placement of all the livery elements. Yet again the font used for the titles doesn’t appear 100% correct but it is closer than some of their previous efforts. Most of the letters look ok but the R and S are not correct. It isn’t particularly noticeable.

Both the ‘real thing’ photos above show the anti-glare shield not reaching onto the radome, however I have seen other proprietary photos that show that originally it did. One important part of the livery done correctly are the blue painted horizontal stabilizers complete with natural metal leading edge. 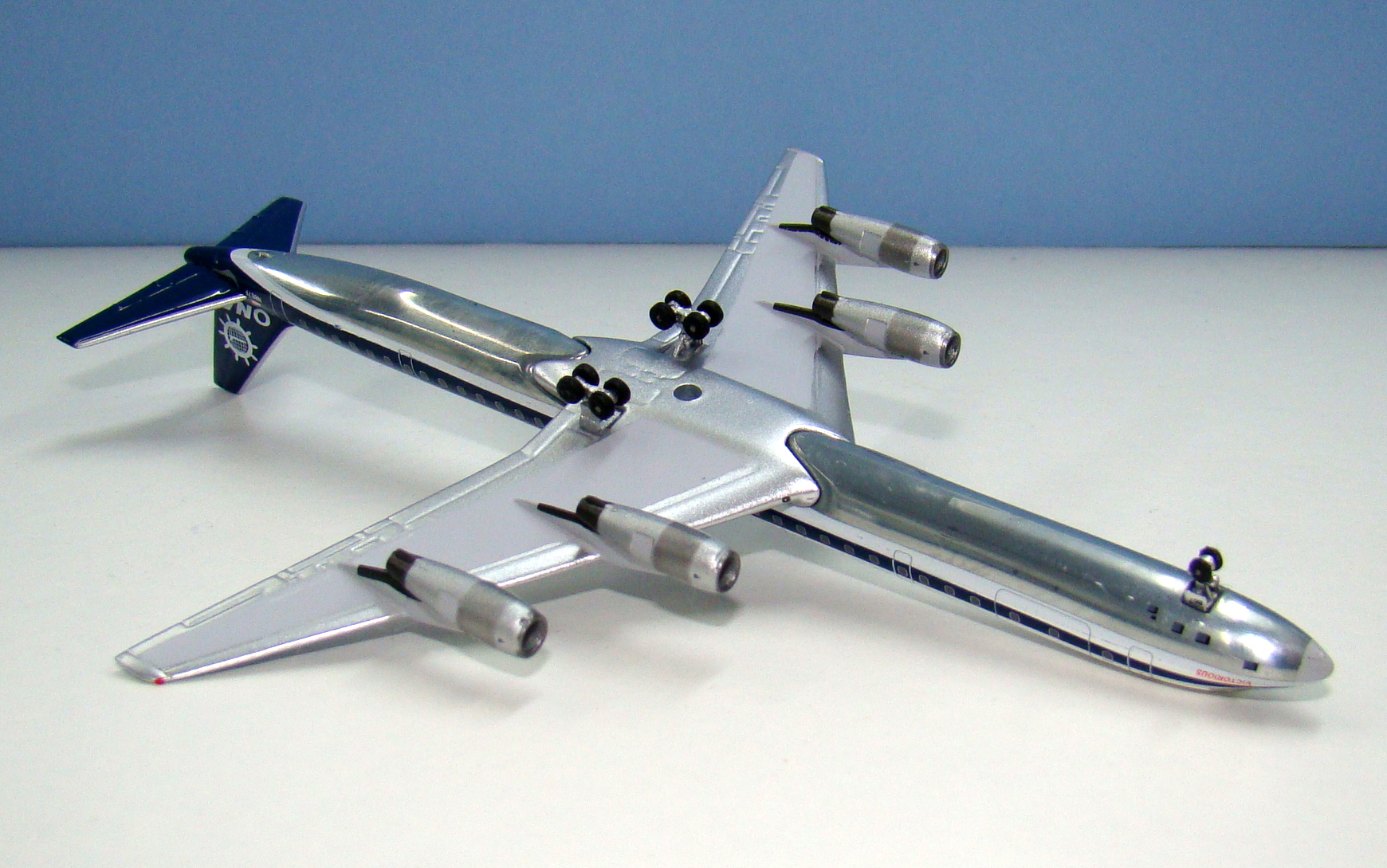 Printing is usually not an area that Aeroclassics struggle with and the barebones of the printing on this model is accurate. Unfortunately the finishing isn’t quite up to the standard of the rest of the model. A few Aeroclassics recently have had a discernable line about midway along the fuselage as if the paint applied there is thinner. I assume it must be a product of the printing method? It is sometimes a bit too obvious and on this model the line can be seen especially at the front where the lower white isn’t as bright as the white above the line.

Towards the rear of the fuselage on both sides the printing of the lower side of the cheatline is poor. Not sure what’s going on there but the line is either poorly defined or there is an uneven application to the white beneath it, almost like a scratch.

One other minor inaccuracy is the colour of the engine pylons and parts of the engines themselves. On the model they are in grey paint but on the real thing they appear to have been natural metal. Construction quality of the model is excellent overall as is almost always the case with Aeroclassics.

This is a fine model and much superior to the old Gemini Jets version of the same airframe released over 15 years ago. Nonetheless it is a shame that when the mould is so good and the livery rendition also excellent that the quality of the printing is sub-par. Aeroclassics can do DC-8s in their sleep but I’d prefer they opened their eyes when they did it! Even so the minor niggles aside it is a superb model and a worthy addition to my supplemental carrier fleet.

Whereas the future of the 737 MAX series hangs in the balance the A320NEO families seems assured and even bolstered by the travails of the Boeing. Certainly, Airbus has played a very savvy game in […]

In the past decade the dominance of the Boeing 777-300ER has made it seem that the type’s success was ordained, however during the mid-90s Boeing’s new 777 was battling it out with the A330/340 family […]