It is easy to be harsh on Gemini Jets nowadays and one of the main reasons in my mind is how incredibly conservative their releases can be. They have a massive mould catalogue but rarely get optimum usage out of moulds where they have a monopoly, meaning it will be a cold day in the Sahara before a lot of holy grails get released, especially if they are MD-80s, 757s or CV-580s. So the recent release of a Continental MD-80 should be a great thing, and it would be – if it wasn’t one of the liveries Dragon Wings had made years ago already. There are so many great MD-80s to be done that re-releasing this one makes little immediate sense. Even so it’s nice to see Gemini make something vaguely classic so I was keen to get it. Have they done a good job on it though? Let’s find out…

Continental had been an original customer for the short DC-9 in the 1960s but had operated the type for only a relatively short period and skipped later versions like the DC-9-30 altogether, instead focusing on a fleet built around 727s and DC-10s. The fractious 1981 Frank Lorenzo Texas Air takeover brought fleet updates to the new Continental and these included the new MD-80. In 1983 an order was placed, though in the end most of the aircraft went instead to the new non-union New York Air. In 1984 Continental turned to the 737-300 instead of the MD-80, after American Airlines had effectively taken up the majority of MD-80 production through to the late 80s. Continental received some of the New York Air MD-80 order in 1984 as can be seen by the regos of the aircraft being in the N8**NY sequence.

The airline would eventually acquire an impressive 70 MD-80s in its own fleet following the crazy merger mania Continental went through. Two of the component airlines that formed the new Continental of the 90s (Frontier and New York Air) were MD-80 operators and it gained 19 and 9 aircraft respectively from them. It also picked up the 9 MD-80s in the fleet of the fallen Transtar in 1987, as well as a decent number of new machines from MDD in 1986/87. As such the MD-80s would form one of the newer components of the ‘junkyard fleet’ that Continental inherited from its predecessors.

The MD-80s outlasted the majority of the fleet of that era and survived in service until January 3, 2005. In fact they were the last type in the Continental fleet not made by Boeing, though of course by then following Boeing’s takeover of McDonnell Douglas they were cheekily referring to the type as the Boeing MD-80! The Mad Dogs definitely played their part in enabling Continental to reimagine itself during the 1990s wearing the globe rather than the Saul Bass meatball.

There have been a few rather half-hearted attempts at an MD-80 mould over the years (Phoenix in 2002, Jet-X in 2009) but only one has ever seen any real usage and that was the original Dragon Wings mould (also used by Jet-X) from 2001. The Dragon mould is pretty decent but isn’t without its issues and hasn’t been used in ages – the other two are pretty poor. So Gemini’s 2013 announcement of a new MD-80 mould had many people excited. It was a shame then that their first release on the mould was such a disappointment. The American Airlines release was all over the shop with the shape around the front fuselage and nose. Gemini thankfully re-engineered the mould but has in true Gemini style only periodically used it since. Is it any good? Yes and no.

Let’s start at the rear and work our way forwards. The rear of the mould is actually very good. The downward angle of the horizontal stabilizers at the top of the T tail is well finished, however the top of the tail is too angular and flat topped. The rest of the tail and rear fuselage is spot on and very importantly the engines are suitably chunky and well sized. So far it’s beating the old Dragon mould, which had incorrectly angled stabilizers and engines that are much too small. This is the pointy tailcone version of the mould (they have a screwdriver tail version too) and that is perfect.

The wings and maingear are excellent too and the mould is a slot in wings one, rather than a cradle mould, so there are no ugly seams. The model does sit a little tail high but that’s forgiveable. There are incidentally no aerials on this mould, which is surprising seeing as Gemini have updated two of their old classic moulds (the DC-8 and 737-200) with aerials even though both moulds are rubbish by modern standards. Back to the MD-80 and it’s so far, so great, but it is when you get to the nose things start to go wrong. 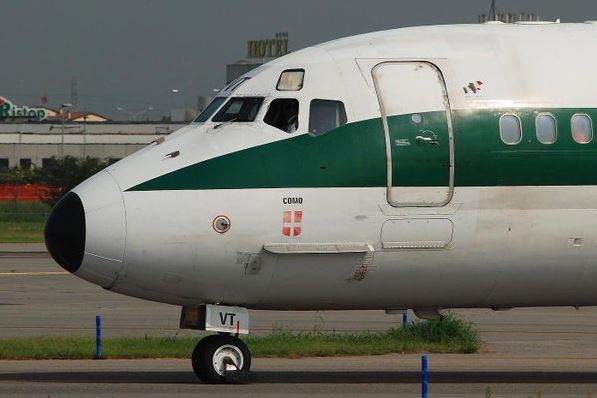 Now for me the nose is the most important area in defining the look of a model and whilst Gemini have fixed the abomination of the original release mould it is still not perfect by a long shot. The shape of the underside of the nose is ok, but the nosegear is slightly too far backwards – check it out in comparison to the position of the side strake in real thing, Gemini and Dragon. The gear also kind of sits into the line of the body rather than against it and the gear doors are way too small. The gear doors are too large on the Dragon mould but here on the Gemini they are almost invisible. Overall the nose on the Gemini just looks too long.

The biggest problems are however on the top side of the nose. It is too pointy coming down from the cockpit, which itself is too sloping leaving the cockpit windows kind of pointing up rather than straight.

The whole thing just looks wrong and is I’d say inferior to the old Dragon mould, and miles away from Aeroclassics superb DC-9 nose. To be fair it doesn’t look awful, but it’s noticeable and kind of spoils what would otherwise be an excellent mould. The majority of the mould is a 9 but the nose is a 5 or 6.

The classic Saul Bass meatball livery (actually called Contrails) was modified in 1984, after the Lorenzo takeover, turning the black meatball into a red one and also modifying the titles. The meatball and US flag were removed from the titles area with the titles themselves increased in size. The flag was repositioned down by the registration under the cheatline. Unlike the Texas Air Corp takeover the livery modification was a tasteful update for CO, but is not looked upon with much fondness.

Gemini hasn’t done a CO aircraft of this era for years so how have they done on the scheme? It’s actually a difficult scheme in many ways as in some lights the stripes and tail logo are really easy to see and in others they tend to blend into the gold base colour. Dragon when they did this model went down the former route with a bright light gold base and flat matt orange. Gemini have gone darker in colour, which interestingly matches the only shot of this particular airframe on Airliners.net. I wonder whether they used that for reference? To be honest I’m not sure what’s correct. I’ll give Gemini the benefit of the doubt here and it matches their previous releases using this scheme.

Assuming they did use the Airliners.net shot, they seem to have got the silver belly proportions correct. Lots of other CO MD-80s (like N938MC above) seem to have had a larger silver belly area, more noticeable from the side, but N9801F doesn’t look like she did.

Gemini got the titles correct, which are nice and chunky unlike on the Dragon version where they are too thin. The wingtops look correct but the engine exhausts are too shiny and light for my tastes. Other details even down to the fleet number in tiny characters on the nosegear doors and tail base are present and correct.

On smaller models printing cockups and QC issues are often more obvious than on widebodies. Looking at the printing it is as you’d expect nowadays excellent. From the fine cockpit window wipers to the door under the main entry door for the integral airstairs to the overwing exits to the cargo doors to the marks on the engine it is beautifully detailed. This goes as far as the belly, which, even though you don’t see it when the model is displayed without a stand, has lots of detail. Top marks here.

As you’d expect from a pre-inspected model this has no major quality flaws but it is also not perfect. There are three issues, although none are really serious. Firstly a perennial issue for JC Wings/Gemini and Phoenix are tyre tabs (obvious in the nose closeups above). The nosegear tyres are tiny, which makes the tabs here all the more obvious. The tyre is also not well fitted to the spigot on the port side.

The maingear also has a problem. The port maingear is not fitted well and so out of alignment with the starboard. Because the gear legs on an MD-80 are so short this isn’t as obvious as it would be on an A320, but when you look at the bottom or in three quarter view from the side it’s pretty clear.

Lastly the port side engine has an obvious seam running along it (see pictures above). This looks like an artifact of the way the engine is built, but is invisible on the starboard engine. It’s almost like it’s gotten a whack at some point.

Overall although there’s room for improvement the printing is excellent and the construction sound.

I’m still not thrilled by the nose area of the new Gemini mould, however by pretty much every other measure it’s a more accurate and better mould than the Dragon. A quick score for the Dragon Continental example yields a total of 22, but it is a very old model. So this Gemini is better and I feel I may have to take back some of my earlier pre-review criticisms. It’s unfortunate that Gemini use the mould so infrequently as I’d love to see releases for AirCal, Muse Air, Ozark, TWA, PSA, Delta, Alitalia, SAS, Finnair, Austrian, Swissair etc, etc, etc. Overall it’s a good model and a worthy addition to the Continental fleet.

It is perhaps a sign of its growing obsolescence that in almost 3 years of reviews I’ve never reviewed a single 767-300. The type has a long history in 1:400 scale but there are a […]