Although the 777-300ER is swiftly approaching the end of its production it is still a major player in both the long-haul travel market, of 1:1 aviation, and the diecast collector market, of 1:400 scale. Accordingly, competition for sales is intense and there have been two new moulds for the type in the past 3 years. The newest contender is from Aviation400, who are swiftly making a name for detail and quality with their A350s and A330MRTTs. As with several AV400 releases the wait from announcement to release has not been short but multiple 77Ws of AV400 are now on the market. So, how does it compare to the moulds from Phoenix and JC Wings?

The big three Chinese majors were relative latecomers to the qualities of the 777-300ER. The type was first delivered to Air France in April 2004 and quickly proved itself more than a match for the competing Airbus A340-600. No other aircraft has also done so much to signal the decline of the Boeing 747-400, but times stands still for no-one and nowadays it is the 777-300ER that finds itself increasingly usurped by the Airbus A350-900/1000 and the Boeing 777-9.

Of the Big Three, China Eastern acquired the first of 20 77Ws in August 2014 while China Southern operates 15, the eldest of which entered service in February 2014. Befitting its status, as the premier international airline of China, Air China acquired its first 77W in June 2011 and operates the largest fleet, the newest of its 28 examples arriving only in August 2018. They are currently the largest component of the long-haul fleet, which also consists of 3 747-400s, 7 747-8Is, 14 787-9s and 10 A350-900s. There are however 20 further A350s on order, plus of course a substantial fleet of versatile A330s also, while there is only a single 787 in the backlog.

Air China, like everyone else, continues to be impacted by Covid. Only two days ago the Moscow-Beijing route was again suspended and the recent outbreak in Beijing (Air China’s largest hub) can only be detrimental. Currently CAAC have a reward and suspension mechanism in place whereby if all inbound passengers of an airline route test negative for three weeks in a row the operating airline can increase frequencies, but if the number of passengers recording positive results reaches five then the route is suspended for a week. Ten positives equal route suspension for four weeks. Air China was unlucky enough to have five passengers testing positive on a July 4 flight.

Despite the current problems it is hard to see how China will not come out of the crisis with an increased global clout. Even though the disease originated in China their early exposure and hardline response has stood them in good stead, especially in a world led by idiots such as Trump and Bolsanaro. With that in mind there is surely plenty of life left in Air China’s 777s yet and Air China itself will surely survive and thrive in the coming years. This airframe, B-7973, was delivered in December 2016 and so is likely to be with Air China into the late 2020s at least.

In my reviews of 777-300s to date the new 2017 JC Wings mould has easily beaten the old 2007 era Phoenix casting. This should be expected seeing as it is a decade younger and the Phoenix 777 remains a decent tooling, just inferior to the JC Wings offering. Aviation400 seems keen to compete in the more lucrative widebody end of the market and so their new 2019 77W is a natural fit along with their A330s and A350s.

Starting at the front and moving rearward the AV400 mould is very similar to the JC Wings in the nosecone and cockpit regions. AV400 has gone the extra yards in terms of detailing on the nosegear. Not only is the detail crisper than on the JC Wings but it has more of it, such as the triangular box atop the two forward prongs coming off the gearleg. In all areas in this region the AV400 outcompetes the Phoenix mould.

The Phoenix mould has been criticized for the small size of the huge GE engines and this AV400 mould doesn’t repeat that error. As with the JC Wings 777 the engines are larger, albeit they are held a little lower due to the shape of the pylons. Engine ground clearance isn’t an issue despite this. At the maingear the first clear error is present in that the gear doors are too short and show off too much of the gear leg.

From the front the engine fanblades are very nice and although thin successfully trick the eye into appearing thicker. They look a little better than those of the JC mould. Both are see-through unlike the older engines on the Phoenix mould.

It is towards the rear that the AV400 mould is weaker. The 777 has a very recognizable asymmetrical tailcone with the APU exhaust on the left. The shape and placement of the APU is wrong and the upper and lower lips of the tailcone too large. Even so this is distinctly better than the old Phoenix mould, which has no APU hole, no lips and a full width attached vertical stabilizer. 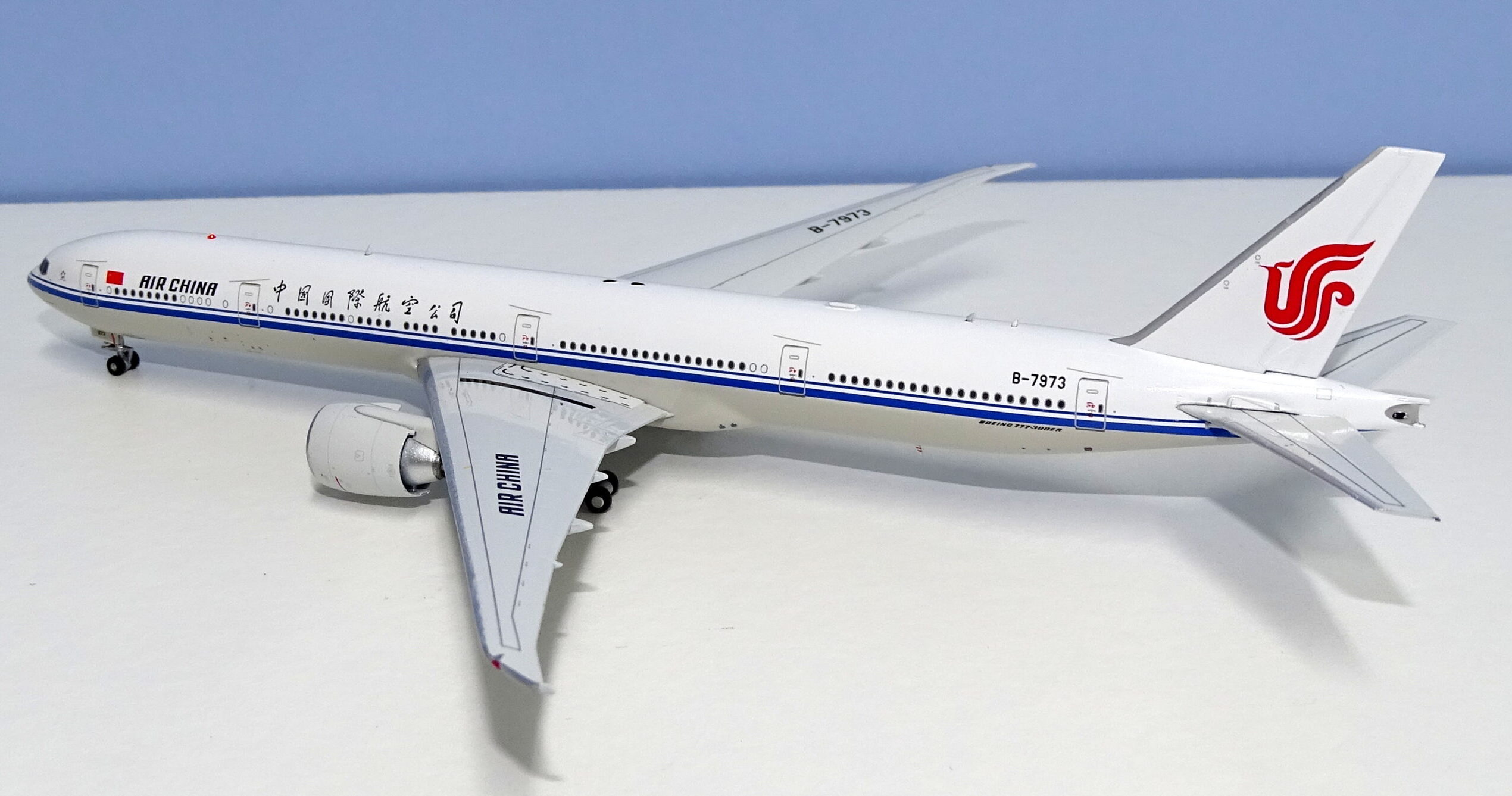 Where AV400 moulds do gain brownie points is in the mould detailing. The small rooftop bumps mid-fuselage and the slightly larger bump aft are moulded in. The four aerials are well-sized and so of course are the obligatory AV400 navigation beacons above and below the fuselage. These small red jewel attachments look excellent and shine beautifully in the light. 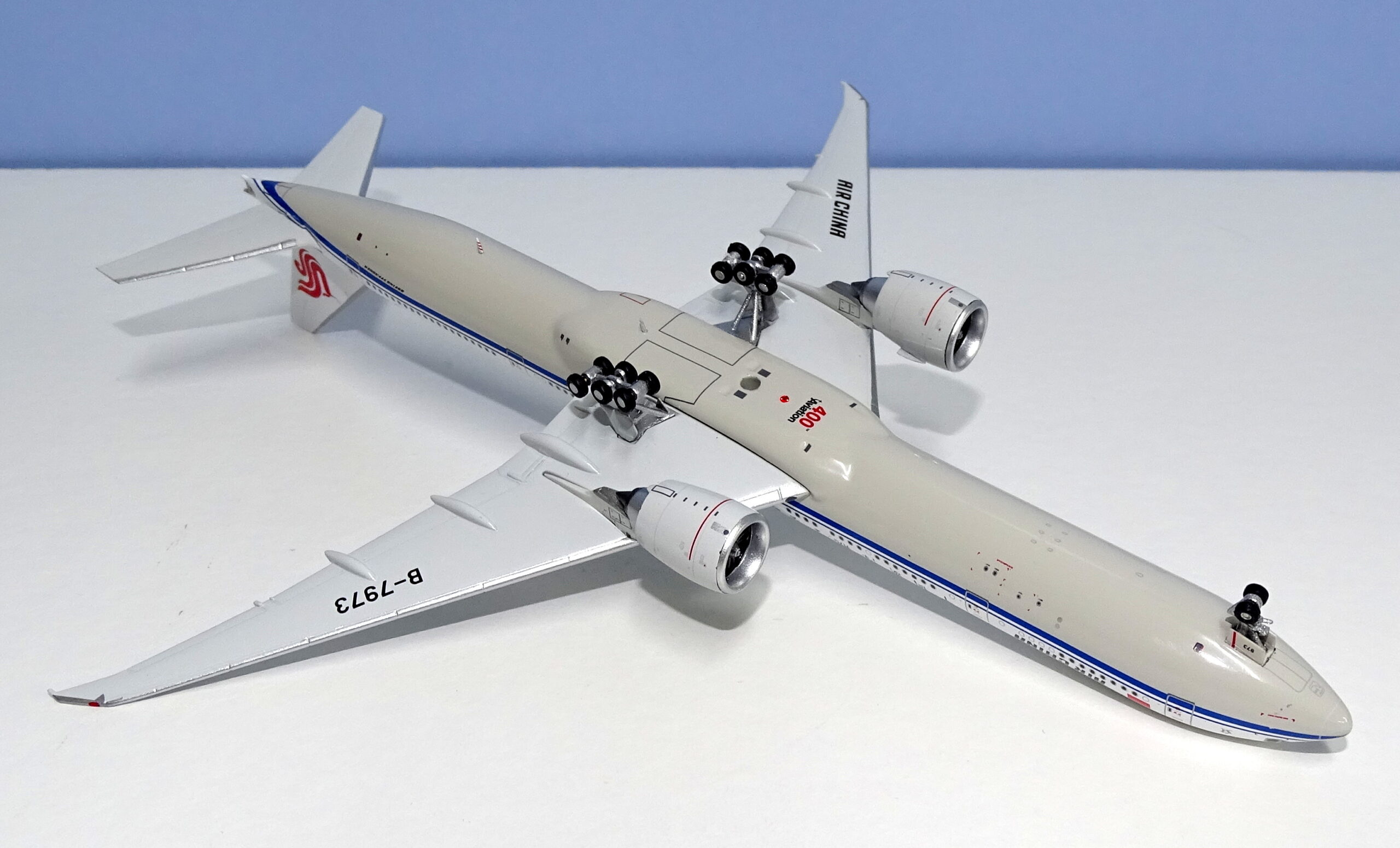 Overall, this is a fitting competitor to the JC Wings 777, which I would say it approaches in quality. It may lose on a pure scoring basis, due to the maingear doors and tailcone, but has extra detail in the nosegear and beacons that the JC Wings does not. Unsurprisingly it leaves the older Phoenix mould for dust. I will be publishing a detailed mould comparison of the top 3 77Ws at my site Yesterday’s Airlines in the coming week or two to determine the exact winner category by category, but until then I will give this mould a 9.

Air China models are hardly rare and the first AV400 777 releases have hardly been especially exciting since they have all been made before. It is one of the reasons why the mould has probably not got the recognition it deserves. This bog-standard Air China livery however is a welcome 77W releases since most of the previous versions, made by Phoenix and Gemini Jets, respectively are rather poor. The pair of Phoenix releases from 2016 and 2017 both have awful cockpit windows while the Gemini release, from 2015, has an odd curving cheatline and is of course on the inferior cradle mount mould. You have to go back to 2011 or 2014 to find passable Phoenix versions of a 777-300ER in this scheme.

The font of the titles, Chinese characters and the VIP / Phoenix tail logo are all accurate and well placed. I can’t see anything incorrect with the livery.

Printing and detail are strengths of AV400 and nearly as good as that by NG Models and JC Wings – the market leaders. A lot of the finer detail is quite light, such as engine panels, nosecone ring and the nosegear doors but it is all present. The maingear doors are a lot darker but well-shaped. Something I have not seen before in 400 scale is the striping on the rear underside aerial. Even NG just colour these aerials in block red so the striping detail really stands out.

The model is well put together in all aspects except for one. The larger of the two rear roof aerials is glued in at an angle and can’t be moved into alignment. It’s a minor flaw for an otherwise beautifully constructed model.

This new AV400 777 is a worthy contender in the market for Triple-Sevens. Anyone who answers Phoenix when asked what is the best 777 really needs their head examined. There are now two superior castings available, both very close to each other in quality. I would probably rate the JC Wings mould slightly higher but the nav beacons, nosegear detail and engine fans on the AV400 mould are superior to the JC. I certainly will be keeping an eye out for AV400 777s that fit my collection criteria, such as a China Southern example. This is a lovely model I can highly recommend.

Last month the moment so many of us had been waiting for finally arrived, as the first NG Models Tristars hit the stores. It goes without saying that I have not been overly impressed with […]

The protection of Russia’s endangered big cats is something that has gained significant support, through no less than Vladimir Putin himself, so it is only natural that a state organisation like Rossiya is also supportive. […]