One of the newest types to enter service pre-Covid was the Airbus A330-900neo and with over 300 on order it is a little surprising that only two of the major manufacturers have shown any interest in producing a 400-scale version to date. Considering there are six A330ceo moulds from different manufacturers and you have to think it is only a matter of time until at least NG Models and Aviation400 join Phoenix and JC Wings / Gemini Jets. It’s a lot less clear whether Aeroclassics and Panda will bother, although surely the latter is more likely than the former. Presumably as deliveries pickup in the post-Covid world more moulds will appear. Until then Phoenix is making hay while the sun shines, having released or announced 13 series 900, compared to 7 JC Wings and 2 Gemini Jets on the competing mould.

Considering its population is approaching a whopping 270 million, it is the 14th largest country by land area and it consists of over 17,000 islands it is perhaps little surprise that aviation has been booming in Indonesia in the past two decades. Despite some fairly major bumps, in the form of regular crashes and blacklisting, Indonesian aviation is in rude health and has been competing for growth records with other fast-growing Asian nations like China, India and Vietnam.

After the many startups and failures of the early 2000s the Indonesian airline scene has settled down somewhat. Gone are historically well-known names such as Merpati Nusantara, Bouraq Indonesia, Mandala Airlines and a lot of high growth but shady operators like Adam Air. What is left is a market consisting of several major groupings, often with multiple brands. These include the flag carrier Garuda Indonesia, Lion Air, AirAsia and Sriwijaya Air.

Garuda setup its Citilink subsidiary in 2001 as a low-cost competitor for many of the deregulation startups. Operations were paused in 2008 and relaunched the following year with 737s. In 2012 Citilink gained its own Air Operator’s Certificate and expanded aggressively with a fleet of new Airbus A320s. By March 2020 this fleet had expanded to over 50 A320s, 7 ATR-72s and a pair of new A330-900s.

The A330-900 has proven popular in Indonesia with both Garuda and Lion Air acquiring the type. Citilink’s pair were an opportunistic acquisition, as both were previously bound for WOW Air of Iceland prior to its bankruptcy. Both aircraft kept their WOW fit-out of 323 economy and 42 premium economy seats. Initial plans were to fly them between Jakarta and Frankfurt, although on that route the type would have been payload restricted.

The pair of new A330s joined Citilink, in December 2019 and January 2020, and ultimately did not begin the FRA service after all. Instead they have been put to use in more familiar territory. Apparently, Garuda had planned to provide Citilink with a pair of its own economy configured A330-300s, which it used for Hadj flights as well as to provide extra capacity on domestic and regional routes. The first service for the neos was Surabaya to Jeddah showing that the new frames will be competing against Lion Air’s own A330neos on the lucrative pilgrimage services to Saudi Arabia.

There still seems a strong likelihood that Citilink will acquire some of Garuda’s A330ceos, or even neos, in the future but for now these two will be the entire widebody fleet of Garuda’s low-cost partner.

Whereas JC Wings / Gemini chose to create an all new mould for its A330-900 Phoenix has taken the cheaper route of providing new wings and engines for its existing A330-300 mould. This makes sense for them since their A330 was already quite good, whereas the existing JC Wings A330ceo is one of, if not, the weakest A330 option in 1:400. I suspect that if others also produce an A330-900 then they will also do so by using their existing A330-300 fuselage and landing gear.

While Phoenix’s choice makes sense it does also mean that the new 900 mould acquires several of the strengths and weaknesses of the existing A330-300 offering. The strengths here are the excellent fuselage shape. I really like the nose region and cockpit of the Phoenix A330. It has just the right amount of pointiness. Likewise, the vertical stabilizer and tailcone are excellent.

On the more negative side of things, although broadly decent, the A330 undercarriage isn’t perfect. The nosegear door is too large and the maingear bogies a little low between the tyres. The new undercarriage on the JC mould is a little nicer, although whether you prefer the Phoenix silver or the JC grey is entirely up to the collector.

The big new additions to make this an A330-900 are of course the wings and engines. The engine pylons hold the engines at a good height in relation to both the wing and the ground. The underside of the pylons isn’t as exact as on the JC mould but is decent. The shape of the engine nacelles is excellent and Phoenix go with slightly thicker fanblades inside the engine than JC, which are more realistic. Both moulds have rotating fanblades. Overall, the engines are elegant and tidy. 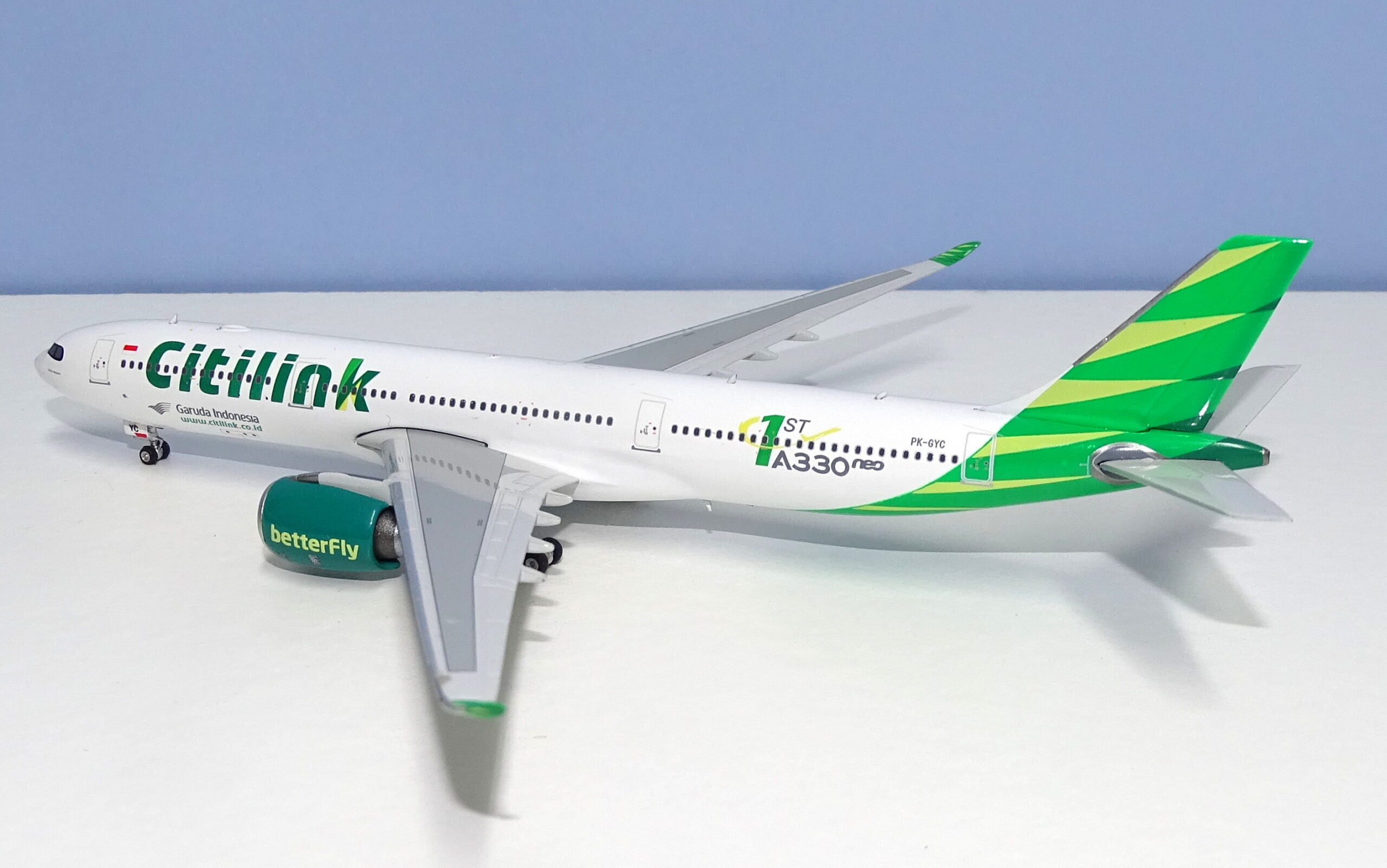 Unfortunately, the wing itself is not such a triumph. The general form of the main wing and its attachment to the fuselage are good, but the flap track fairings at the rear sit at the same height as the rear wing edge rather than just under it and are too pointy. The fairings on the real thing are squared off at the back and JC Wings’ mould has this correct.

The biggest fail of this mould are the new A350 style sharklets. Phoenix just hasn’t been paying attention here and they are completely the wrong shape. They ought to curve back and upwards so the sharklet is not as wide as the wingtip itself. They then curve upwards giving the entire forward line of the sharklet a complex shape. The sharklets on the Phoenix mould miss all of this detail and just curve up from the wing forward edge in a simple curve. The instep movement of the sharklet is missed and they are significantly shorter than the real things. Comparing them to the JC Wings mould, and photos of the real aircraft, and they look like they are from a different aircraft type. It is a major error. 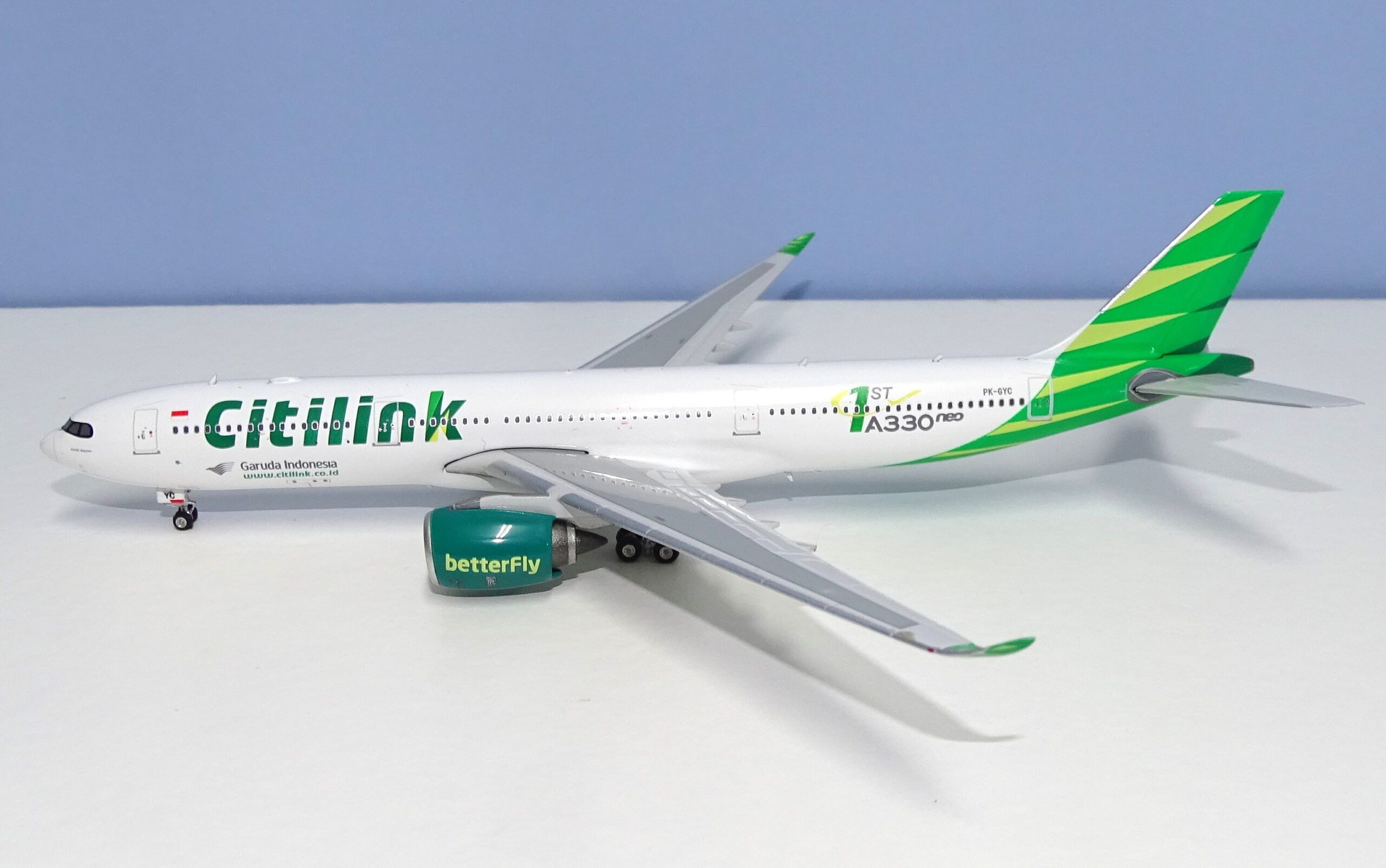 The last time I reviewed a JC Wings A330-900 I was harsh and docked a couple of points for the angle of the wings. The Phoenix wings are angled nicely but the inferior and incorrect form of the sharklets detracts from this, and together with the older undercarriage and fuselage I think the Phoenix is the poorer offering.

Garuda changed from its mythical Garuda livery to the new ‘Nature’s Wing’ scheme way back in 2009 but it still looks fresh and attractive, which is impressive considering it is a mainly Euro-white scheme. Citilink took on a version of the same scheme but coloured to its own palette of greens. If anything, this version is almost more lovely than the parent airline’s. When it acquired its own AOC Citilink altered its colours slightly changing the lightest colour on the tail to yellow and enlarging the main titles.

Colour matching of this livery has been problematic in the past, particularly for Aeroclassics. There are three main colours – two greens and a yellow. Phoenix often seem to go light on colouring and they don’t entirely seem to have gotten the memo about the change to yellow. The yellow in the K of Citilink and in the small plane on the fuselage is bright and vibrant but the colour used on the tail and the engine lettering is a lot duller and lighter. It definitely has a green tinge to it and is not quite correct. 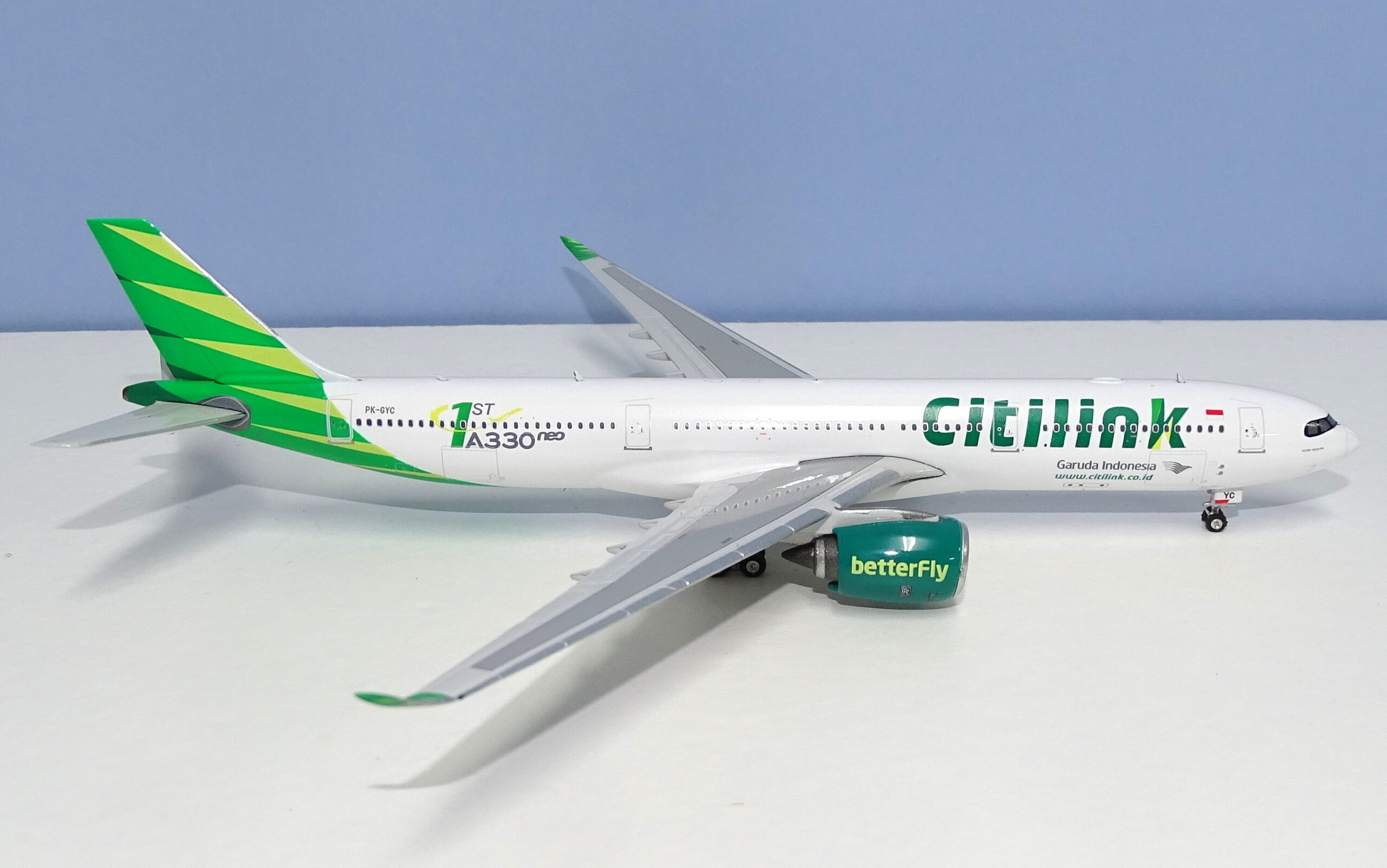 The main green on the tail is good but I also think the darker green on the engines and titles is a little dark and dull. At least the titles themselves use the correct font and size. The 1st A330neo logo on the rear fuselage is also all good. The titling on the engines is also the right size and font, but I’ll talk about its location in the next section.

The location and form of the small Garuda titles is ok but the Citilink website address is a little too close to the Garuda titles. So overall this is an ok representation of the real scheme but with better colouring I wouldn’t be knocking off two whole points. 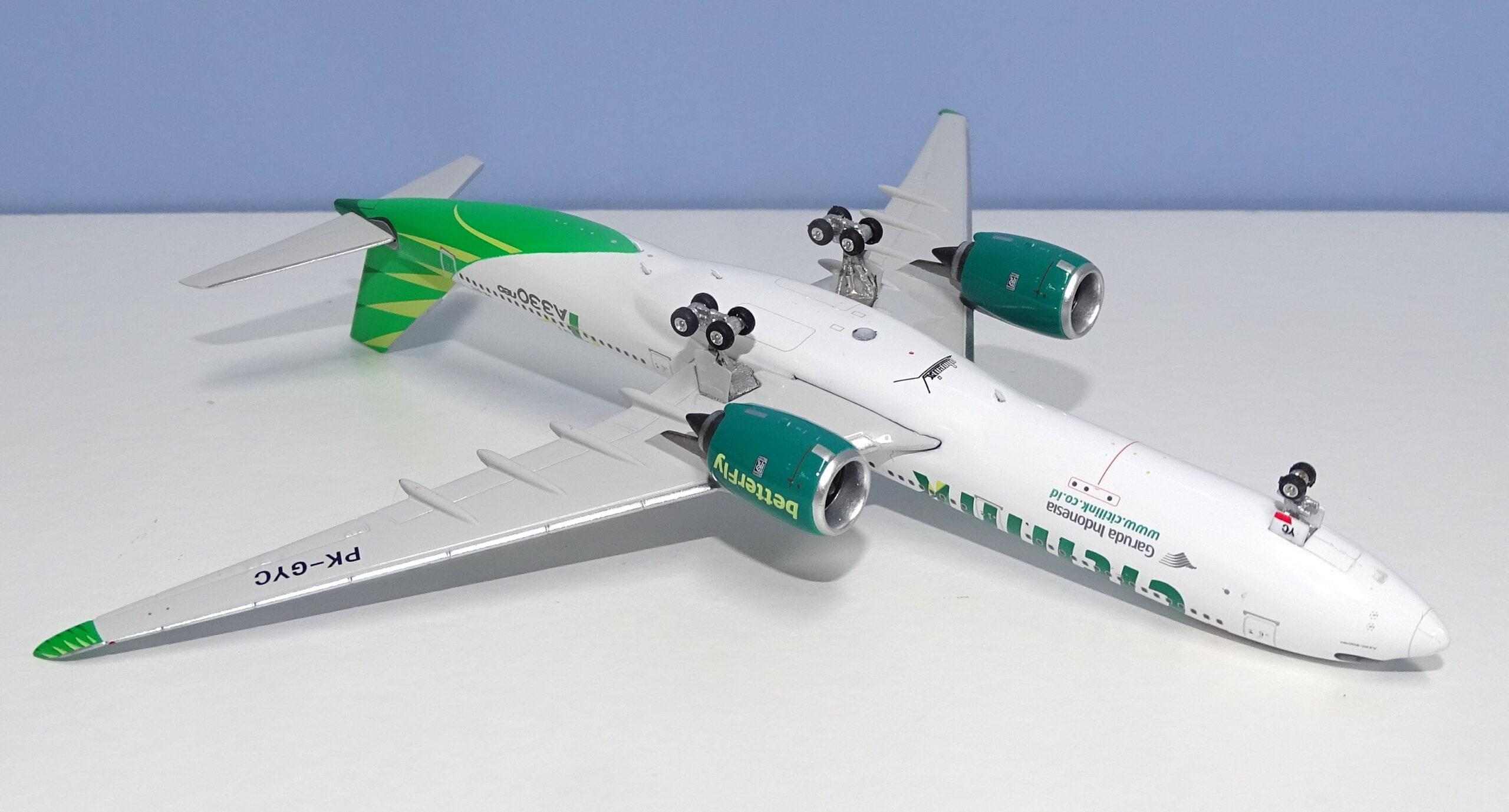 In my opinion, and experience, Phoenix have the weakest printing of all the major players. They also use a rather glossy finish. In general, their models look good from distance but much less so from close-up and this one is no exception. Hilariously for a long time Phoenix didn’t bother to print maingear doors on the underside. You may say you never look at the underside and so that doesn’t matter but the maingear doors are hardly an optional extra, so if you don’t miss those you are very accepting of weak detail. Anyway, this model has maingear doors but Phoenix hasn’t bothered making them actually connect with the gearlegs. They just kind of sit there as a box.

Another issue Phoenix has had with its A330s for sometime is the height of the windowline, which can get ridiculous if anyone remembers their Tibet Airlines example. The windowline is too high on this model as well, although not appallingly so. The window should sit at about the midway point of the cockpit windows but they are at the line of the top of them. So I’d say it is about a window height to half a window height too high, which isn’t a huge amount I guess but is noticeable.

My last point on the printing is that the ‘betterFly’ titles on the portside engine are at a slanted angle. The starboard side is fine.

Construction quality is good and this A330 doesn’t suffer from the regular Phoenix A330 issue where the rear wing hasn’t been fitted correctly. This issue is due to the wing slot being only at the forward half of the wing so the whole wing can wiggle easily if it wasn’t properly fitted. Phoenix loves a tyre tab also and two of the tyres have them. I have to hand it to Phoenix that they have put together a model with seven separate aerials well.

This model displays well but under the cruel glare of a detailed inspection you are getting the usual Phoenix quality. It’s not bad, but it’s not great. Both the A330neo moulds have concerns but for me the JC effort is the better combination because the incorrect wing and winglet shape is annoying and hard to forgive on a mould where that was 70% of the work that Phoenix had to do! A score of 23 is exactly what the last Phoenix A330 I reviewed got. It’s disappointing but not surprising.

Aeroclassics is having something of a retro year having brought back into use several moulds that were long thought lost. I have already reviewed one of the 747 classics and have blogged about the return […]