Aviation400 are the latest to throw their hat into the ring with a new A330 mould to compete against the existing castings from JC Wings/Gemini, Phoenix, Aeroclassics, Panda Models and NG Models. It seems you can’t not have a mould of Airbuses’ super popular widebody and AV400 have certainly planted themselves firmly across the Asian widebody sector in 1:400 with an A330, A350 and 77W. AV400’s A350s have been very highly thought of but competition in the A330 space is stronger so how does the AV400 effort compare?

Chengdu based Sichuan Airlines has regularly displayed special schemes for its aircraft, although these have usually centred around the Giant Panda for which the Southwest Chinese state is a major refuge. That is not the case with its latest special colours, which instead feature the Wuliangye brand of liquor that originates from the city of Yibin in the southeast of Sichuan.

Wuliangye Yibin Company Limited specializes in making baijiu a family of liquors made from grain (rice, wheat, barley or millet). It’s no 1 brand is simply known as Wuliangye and consists of Proso millet, corn, glutinous rice, long grain rice and wheat. Interestingly Baijiu is a clear spirit but in terms of complexity and mouthfeel is more similar to Whiskey.

It is also the best-selling spirit in the world thanks to the massive Chinese market, selling over 10.8 billion litres in 2018 (more than whiskey, vodka, gin and rum combined). Wuliangye is also very high in alcohol around 108 proof, although a brand is made that is 68% / 136 proof.

Wuliangye has been heavily involved with branding. In late 2019 it signed a sponsorship deal to rename a China League One Football Club as Sichuan Jianzhuang – one of its brands. In 2012 it made headlines for a deal whereby Yibin’s new airport would be named Yibin Wuliangye. This caused controversy inside China over the role the company was playing. Although the project was supposed to take 3 years it does seem that Yibin’s old airport of Caiba remains in service in 2019, perhaps it has been delayed or cancelled?

Sichuan Airlines has repainted a pair of its A330s, B-5923 and B-5929, into the new colours but has previously operated other A330s with the Wuliangye logo on them. Sichuan’s fleet has grown impressively in the last decade and now consists of over 150 aircraft, 15 of which are A330s and 4 A350s. Both of the repainted aircraft are 2013 build A330-343Xs, which are more than capable of being used on Sichuan’s growing long-haul network, now covering 5 continents, and taking the word of Wuliangye’s famous alcohol to the West.

This aircraft is another case of JC Wings having picked a more unusual Chinese A330 for release, while Phoenix haven’t bothered with it. So, it makes sense to compare this Aviation400 version most closely to the JC Wings A330 since they have made exactly the same aircraft/livery combo already. The JC Wings A330 is also the weakest 1:400 A330 to date so if the AV400 mould can’t beat that then it isn’t going to get far.

Like all the other extant A330s in 1:400 this mould looks like the aircraft but like the JC Wings mould I am not completely sold on the nosecone. The nosegear is well positioned but I do think the nosegear doors are slightly too small and the forward process on the gear leg is too high. I’d say the nose region is better than the JC Wings mould but not as strong as any of the other competing moulds.

I also think both the nosegear and maingear are a little short, but they are at least the same height as each other thereby avoiding the taildown issues the JC mould has. The rest of the fuselage is accurate and so are the wings, which slot into the fuselage tightly. The rear wing join is well modelled as are the various scoops on the underside of the fuselage. 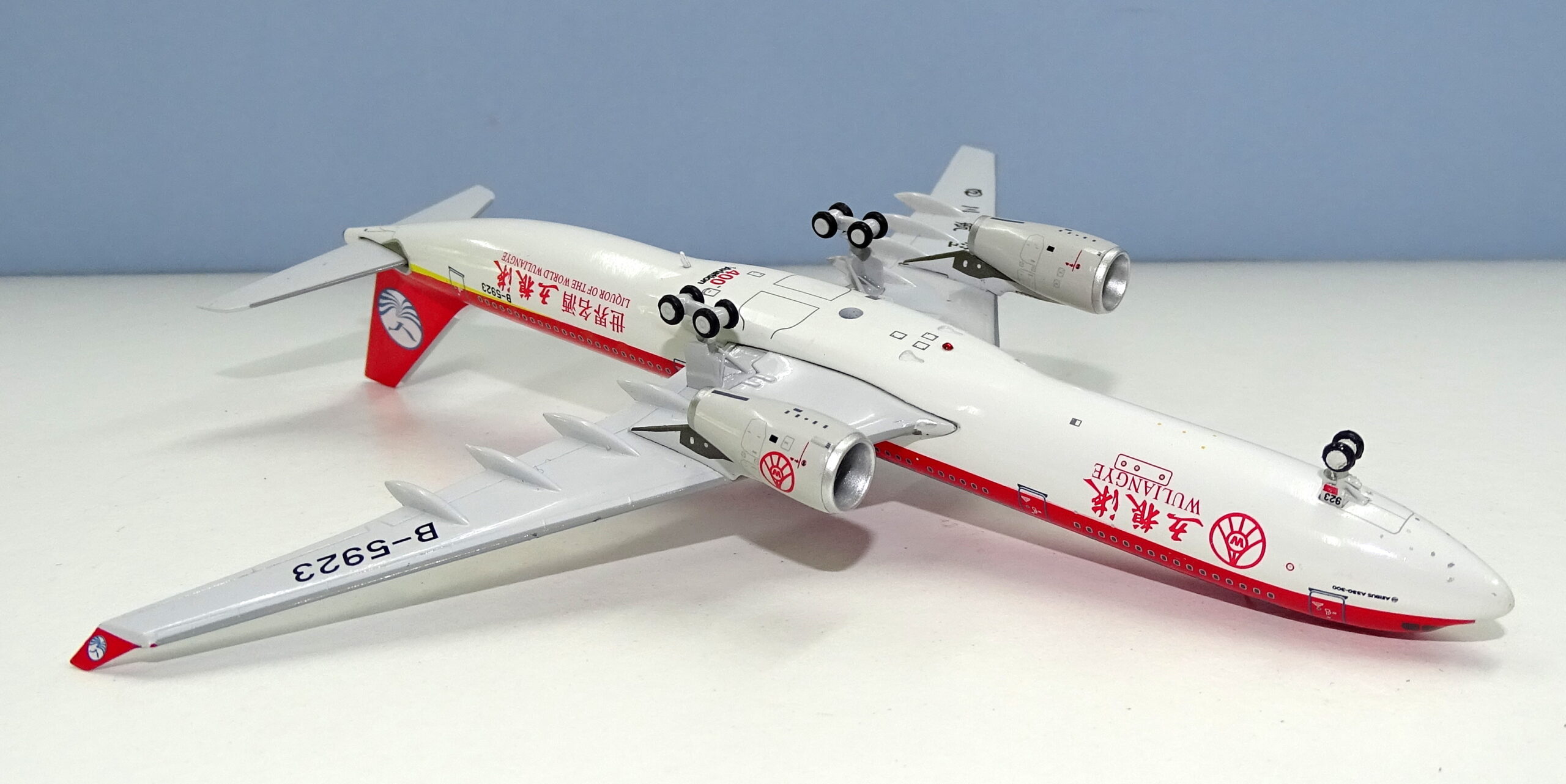 The Trent 772C-60 engines are well shaped and hang from convincing pylons. A nice detail is that the engines are see through, although this does mean the fanblades are a little too thin in order to carry off the effect. I can take or leave this kind of micro-detail as I’m not sure it really adds any realism to the model but the engines do look nicely detailed.

One of the areas that has made the AV A350 well liked is the addition of navigation lights atop and beneath the fuselage. The A330 also has this detail but it has not been carried off with the same panache. The beacon atop the fuselage sits up like a little volcano, or spot, and is a bit offputting. The one under the fuselage is better.

A nice detail is that the small roof bumps are all present. The forward one is moulded in while the rear pair are small additions. These are very nice; however, they contrast with the antenna that have been added. Four are present but the three larger ones are too large, even taller and thinner than those on the JC mould.

Overall this A330 is probably better than the JC Wings mould in several details (maingear length, nose and moulded in forward dome) but I’m not sold on the nosegear, navigation beacon or aerials.

The Wuliangye livery is a departure from the standard Sichuan scheme, which has to be one of the most retro liveries out there. Instead of the red spear angling down from the tail this livery has a complete red fuselage top. The red colour on the model is slightly too dark but it’s within tolerances for me. At the rear of the fuselage a yellow band sits under the red and this widens towards the tailcone, or at least it ought to. The model’s yellow band is suitably bright but doesn’t widen enough behind the tail. The JC Wings release gets this right but commits other sins that are worse.

Both the titles and logo on the Sichuan Airlines livery are blue not black. AV400 have correctly provided blue titling (maybe slightly too light a blue mind you) but JC Wings have made theirs black. Within the red rear portion of the fuselage there are at least 13 five pointed stars. Often in photos these do not stand out very well, as they have a deep orange background. Once again, I think Aviation400 has done a better job with the stars than JC Wings has.

The aircraft prominently features the Wuliangye logo on the forward fuselage and engines, plus additional titles on the rear fuselage. These all look good on the model but unfortunately the engines are grey when they should be the same white as the aircraft belly.

Printing detail on the model is fine and of high quality, at least for the most part. The panel detailing on the engines and the fuselage underside are as good as anything you’ll see from NG Models. Unfortunately, the overall effect is marred by a couple of things, one by design and one by mistake. On the starboard side just by the front of the large Wuliangye titles there is a small paint defect running down from the red upper fuselage. The small smudge is not big but I notice it every time I look at the model.

The other issue is that the nosegear tyre has not got enough tyre to it. The tyre hub region is much too large making the tyres appear too thin and the finish is sloppy. I’m not sure if this is a paint issue or a tyre construction problem or both. The maingear has the same problem to a lesser effect. Both sets of gear could be improved with thicker tyres I think, which would also go some way to improving the height of the undercarriage.

All the major components of the model are put together well except the antenna, which are already too big, are poorly fitted. The two rear fuselage roof aerials are at fault. The larger one is not glued in properly, and moves, whilst the smaller rear one is firmly attached but attached incorrectly side on.

As my first AV400 A330 this model is a bit meh. The overall mould is satisfactory, but not spectacular. The livery application is better than JC Wings have managed in some ways and worse in others, plus the finishing quality is poor. I am a big fan of the AV400 A350s and will give their A330 another chance, but from what I’ve seen this isn’t a must-buy moulding, competes only marginally better than the JC Wings example and less well than those from other manufacturers.

Despite modifying its sales method and the impact of Covid Aeroclassics has had a very good 2020, at least in terms of the range and quality of releases. Last month I felt compelled to acquire […]

You just can’t argue with the money and effort that JC Wings has been putting into producing new moulds. This has been bearing some beautiful fruit in the widebody arena meaning that JC has some […]