It is perhaps a sign of its growing obsolescence that in almost 3 years of reviews I’ve never reviewed a single 767-300. The type has a long history in 1:400 scale but there are a lot less new models for it then there once were, and few new liveries. That hasn’t stopped JC Wings from recently mining the history of the type to find a rare and interesting Chinese example. Usually once a model is announced by JC it can take anything up to a year for it to actually be released, however a few new announcements get fast-tracked, often Chinese ones. So it is that only a few months after announcement this attractive 767-300 is ready for review.

The People’s Liberation Army Air Force (PLAAF), or simply the Chinese Air Force, operated its own arm of flight operations called China United Airlines (CUA) using passenger airliners between 1986 and 2002. Its operations, from the military airport at Beijing Nanyuan, still included military and VIP flights but increasingly also included civilian operations. Initial equipment consisted of Hawker Siddeley Tridents and new Tupolev TU-154Ms, but these trijets were joined by new Boeing 737-300s in the early 90s. The current incarnation of China United is a restarted operation after the armed forces were banned from operating airlines.

CUA continued to buy American equipment throughout the 90s and in 2000 acquired a new 767-300ER to be operated as the private jet of Jiang Zemin, who was at the time the leader of China (officially he was General Secretary of the Communist Party, Chairman of the Central Military Commission of the Party and President of the People’s Republic).

The aircraft was delivered new to Delta Air Lines but never made it to Atlanta. Instead N179DZ was immediately on-sold to China. At the time it was suggested that perhaps Delta’s willingness to sell may have been a form of inducement to China to assist it in getting permission to operate more flights between the US and China. If anything, the experience with the jet probably had the opposite effect.

The 767 was sent to San Antonio for fitting out and here 27 separate listening devices were secreted onboard, including some in the bathroom and headboard of the President’s bed! The Chinese discovered the suite of bugs soon after delivery, in October 2001, and announced to the world in January 2002 the fact of this, no doubt causing much embarrassment to the US intelligence agencies and Bush administration. Unsurprisingly there was also a certain amount of blood-letting in Chinese military circles for negligence and corruption.

The aircraft had cost the Chinese $120 million plus a further $10 million for the fit out. Subsequently it seems the US identified that an FBI informer had tipped off the Chinese about the jet and it was the National Security Agency who were responsible for the bugging. Of course, the US government was not keen to comment on the topic further. The Chinese actually made relatively little of the debacle, perhaps partly because the aircraft was supposed to be under 24-hour Chinese military guard whilst fitting out, and also because the purchase of an expensive foreign plane with a luxury fit out was hardly becoming of the leader of the PRC.

Unsurprisingly the aircraft was deemed unsuitable for its intended usage and instead found itself with Air China, registered as B-2499. This doesn’t appear to have finally occurred until early 2004, after the replacement of its electronics fit and alteration into standard passenger configuration. Although Air China operated 767s this was an oddball as it was the only one fitted with General Electric engines, so it was hardly surprising that the aircraft’s career was short. It was stored at Beijing at the end of March 2012 and leased two years later to Sunday Airlines of Kazakhstan as UP-B6703. The aircraft remains in service and is a footnote to an unusual bout of geopolitical espionage.

The 767-300 has a complicated mould history in 1:400 scale, partly because at various times Gemini has used both its own mould (of which there are several variants) and the Phoenix one (sometimes alongside each other). JC Wings have only ever used the second version of the original Gemini mould, what I call the 1b mould. The 767-300 is also one of the few aircraft types where there isn’t a clearly obvious best of breed casting too. Of the 25 767-300s I own 9 use the Gemini / JC Wings mould, 8 the Aeroclassics / Big Bird, 2 the Witty Wings / AV400, 3 are Dragon Wings and 3 are Phoenix. It is only Gemini / JC and Phoenix that still have moulds in use as of 2019.

Of the two active moulds both are good quality efforts but in my opinion the Gemini / JC Wings 767-300 is the better of the two. The fuselage shape is excellent, and captures the type well, but it is the wing/fuselage fairing that makes the difference between the two for me. The Phoenix mould is flat sided at the wingroot and does not accurately show the, admittedly gentle, bulge it ought to.

Ironically the Phoenix is a slot in wings mould so should be better, but like on their A320 series the slot in wings have allowed Phoenix to ignore the shape at the wingroot. The JC Wings mould being of older origins is a cradle mould, but having the cradle at least allows for the fairing to be rendered accurately and the seam line that results follows the fairing shape forward well. The seam line is a tight fit on the port side but less so on the starboard. It is far from the only time a cradle mould is better than a slot in wings one but it is the most obvious example I can think of.

I also really like the rolling gears that JC Wings have fitted to the old mould to update it. They are superior to the old static gear and have very nicely detailed gear legs and well sized tyres. Four aerials are fitted to the mould and as is often the case for JC Wings they are a little too tall and pointy. The only other criticism I can level at the mould is that the tailfin is perhaps slightly too thin, but if it is it is hardly noticeable. 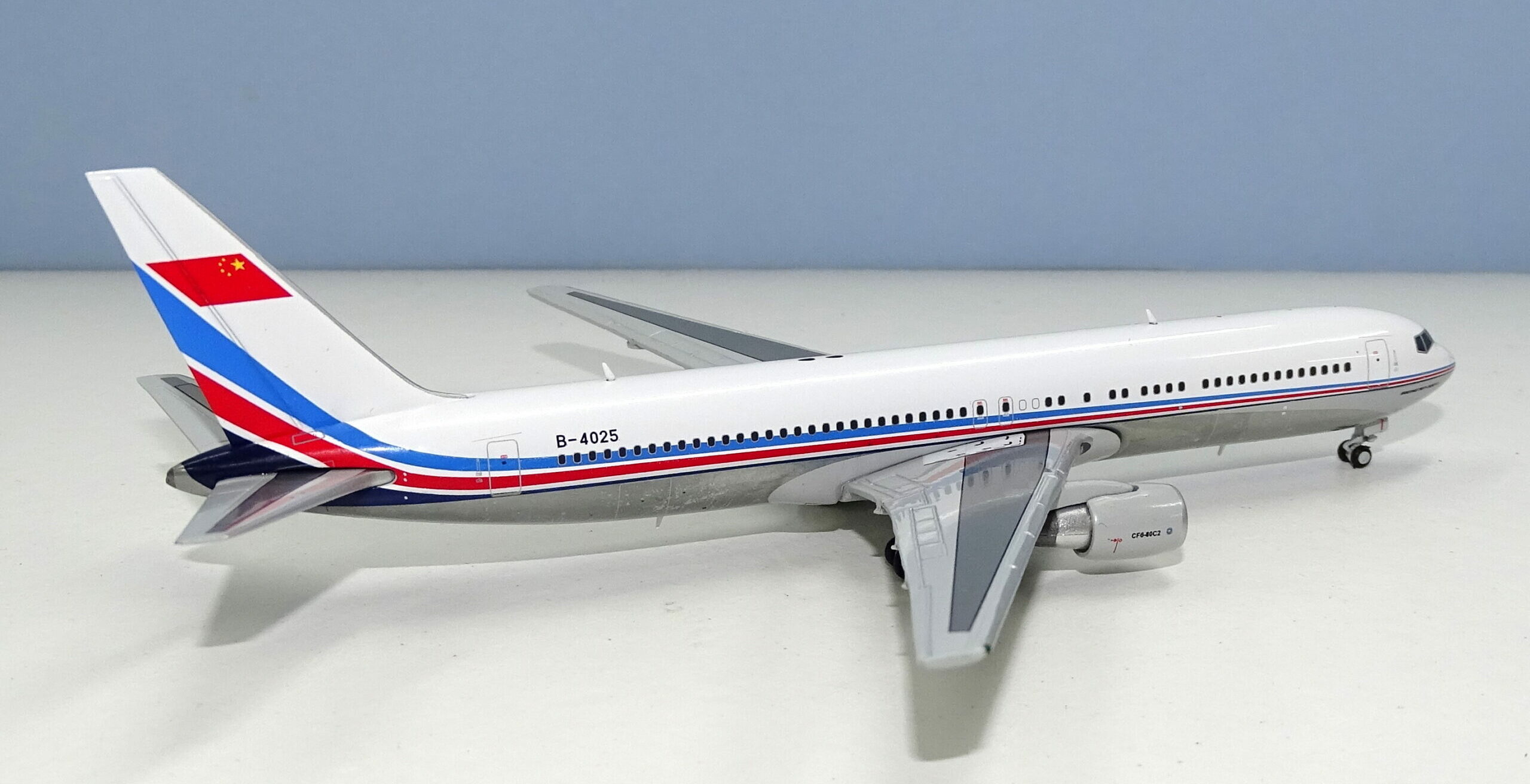 The wings and CF6 engines are well shaped and attached. Overall this is a very effective older mould, which has been tastefully updated. 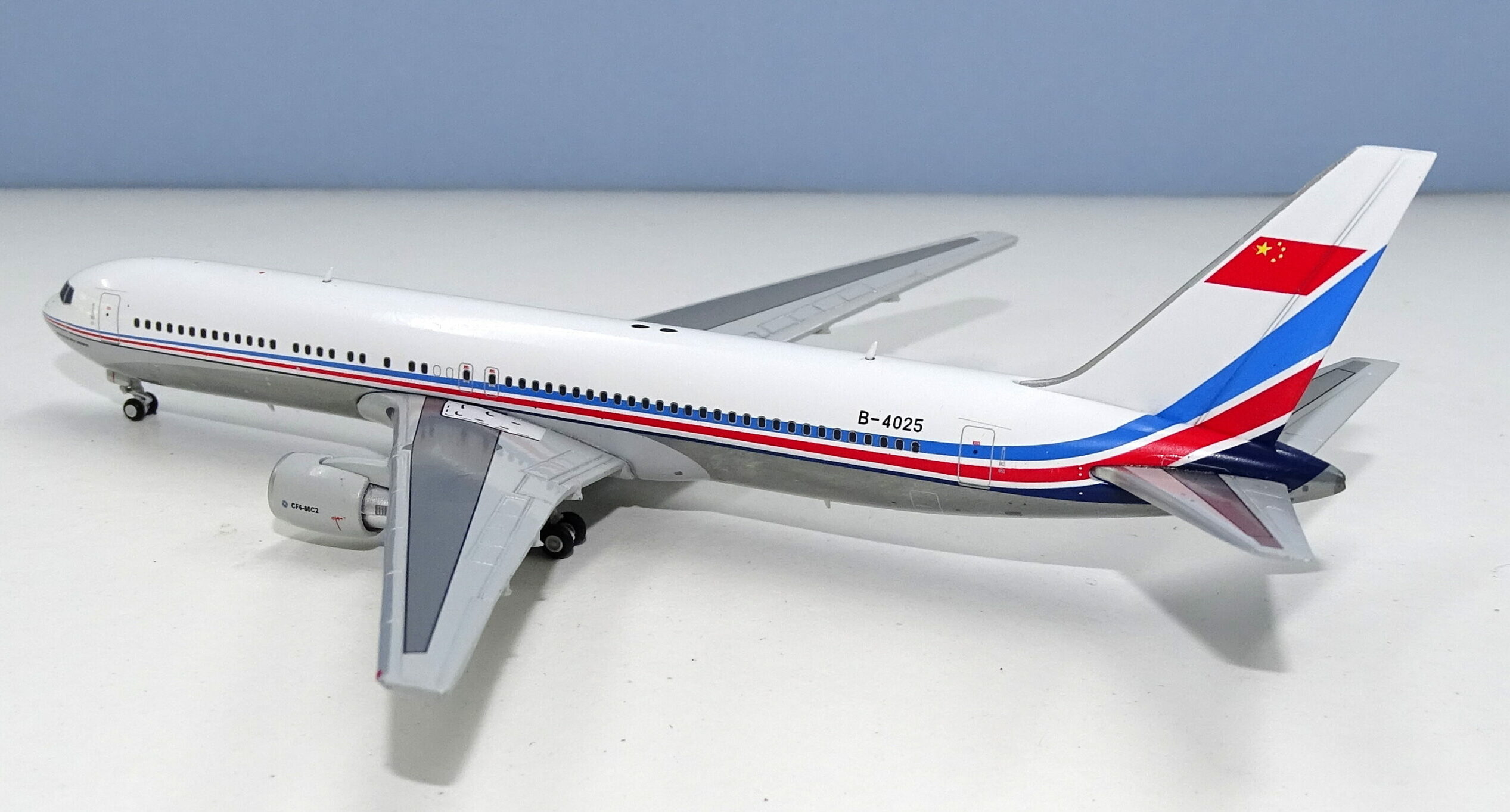 Given it was never used in service, and the furor around the aircraft itself, there are few actual photographs of this aircraft in the China United livery. In fact, I can only find a single photograph of it – on Airliners.net here. Nonetheless the aircraft wore the classic CUA government colours with the Chinese flag high on the tail and three lines sweeping down from the tail to the nose. It also had a very attractive natural metal belly.

I can’t fault the livery application. The lighter blue looks a bit lighter than the photo, however it matches other aircraft wearing the same scheme. The red and dark blue are both fine. The striping is beautifully done and the natural metal belly is exquisite. The belly also includes the correct areas that are not metal being painted grey, such as the forward lower fuselage and wing box.

Text detailing such as the aircraft type name and engine type are accurate. Top marks here!

The only issue I have with JC Wings 767s is the cockpit printing. Sometimes the windows are too large, although not in this case, but usually they are slightly too high. This is the case here, at least at their forward margin, where they are printed just slightly above the change in angle from nose to cockpit. It isn’t a big problem but the windows are a little high at the front. 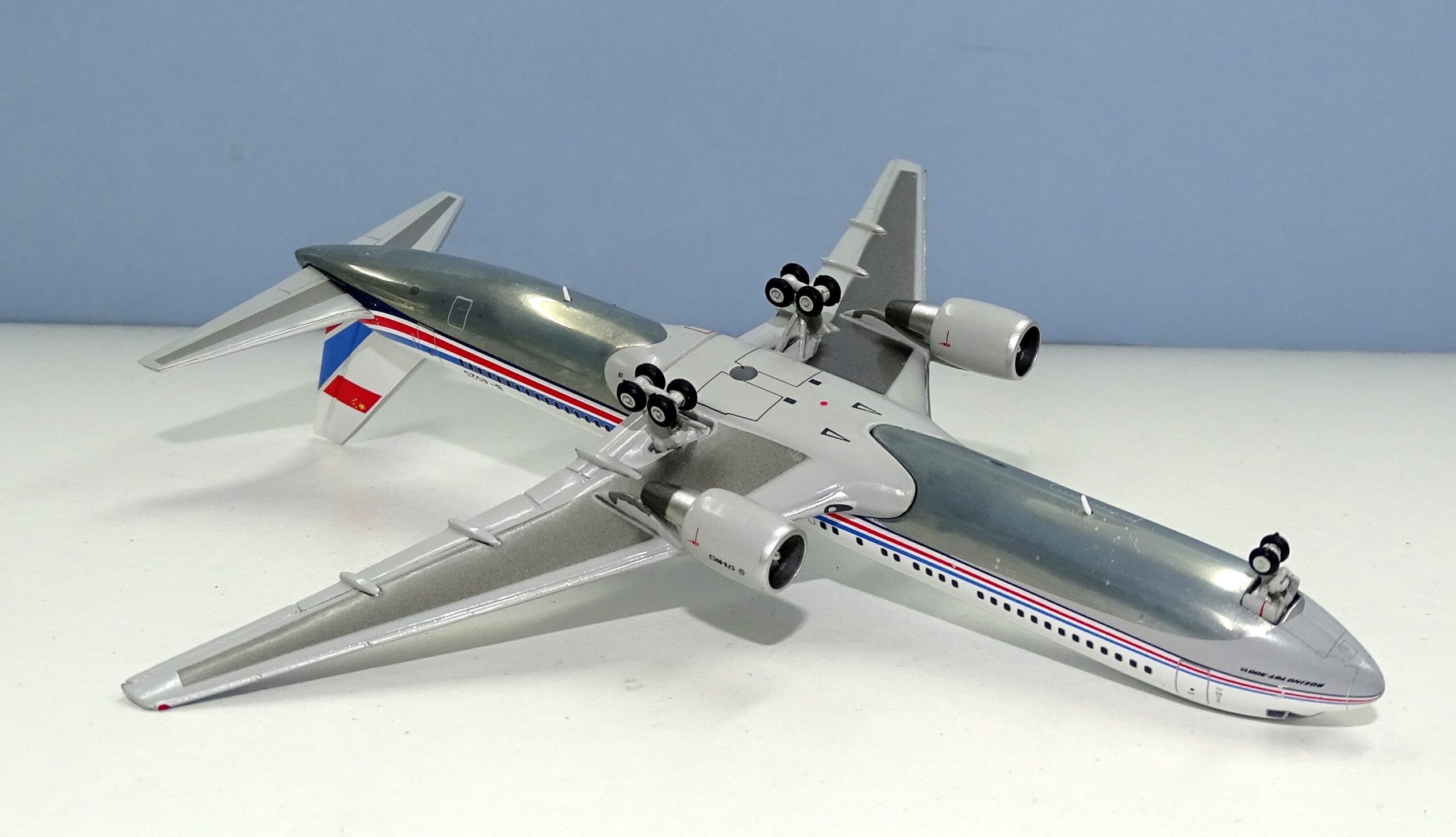 Otherwise printing is of the standard I have come to expect from JC Wings i.e. a high one. Printing on the natural metal belly is especially fine and attractive. Likewise, the model is very well put together with no quality issues. There is the smallest hint of some tyre tabbing but it is minor.

This is a stonking good model from JC Wings, all the more so because of the fascinating back story that comes with it. I don’t usually collect military or government types but China United’s connection with airline operations allows this to just sneak into my fleet and I am very happy it has done so. It seems almost anything that appeared in Chinese operations will get made eventually and this is a top-class addition.

August will certainly be a big month for JC Wings as the manufacturer has announced the release of 27 new models. A total of 14 1:200 scale models will be introduced as well as 13 […]

This is my third Gemini/JC Wings 787 review and all three have used different mould variants. JC Wings have proven to be the most adventurous company in 1/400 in 2017 so far and the idea […]