Gemini Jets is renowned, not always in a complimentary fashion, for their corporate partnerships and one of the strongest is with the flag carrier of the UAE, Emirates. Rarely are there two consecutive months of Gemini releases without at least one EK release, which is all the more impressive when you consider that Emirates only flies A380s and 777s nowadays. Fortunately Emirates mainly white scheme is a good base for special colours and Emirates regularly advertises various causes on its aircraft providing more scope for Gemini. Indeed so far there have been 21 Gemini Jets A380s in Emirates colours made, so it seems that I really ought to take a look at one.

Few airlines and aircraft, aside from British Airways and Concorde, have been as synonymous with each other than Emirates and the Airbus A380. Since it entered service on August 1, 2008, the type has fuelled the huge growth of the carrier and the fleet currently stands at 97 aircraft of 142 ordered. Indeed Emirates has accounted for nearly one half of the 317 firm orders for the type. If the A380 has a future then it will certainly be Emirates that determines whether production continues or there are new variants.

Often Emirates special schemes are in support of football teams or FIFA competitions, however in November 2015 the airline announced a new partnership, which has more idealistic and important aims. This is in support of the organisation ‘United for Wildlife’, which is an alliance of seven conservation organisations working to increase the global response to the ongoing conservation crisis. The new alliance agreed that the most pressing issue to be faced was the rapid rise in illegal trafficking of wildlife – mainly to support the ludicrous Asian medicinal culture that baselessly uses animal parts for nonsensical reasons.

Emirates partnership with ‘United for Wildlife’ began with the painting of a pair of its A380s (A6-EEI and A6-EDG) in special wildlife themed schemes to raise awareness of the issue of wildlife trafficking. As Sir Tim Clark, the Emirates President, said:

“The world is in a global poaching crisis, and everyone has to do their part to stop this, before it is too late. Emirates believes that the global transport industry, including airlines, can play a significant role to break the supply chain of illegal wildlife trade.  And at Emirates, we are committing the resources to do our part.”

By May 2016 the airline had four of its A380s in the wildlife themed liveries, the first two being joined by A6-EEQ and A6-EER. In fact they have also adorned the 1:3 scale replica of an A380 that sits on the traffic roundabout at Heathrow in a wildlife scheme too. A6-EEQ is a 2014 build aircraft that gained its animal scheme in April 2016.

It is pleasing to see that Emirates genuinely appears to believe in this initiative. The world’s wildlife is under siege and I am sure that many species will not survive the combined onslaught of climate change, habitat destruction, overpopulation, pollution and hunting that humanity is unleashing upon them. Everyone should try and do their part where they can. As well as the flag flying Emirates are also collaborating to train staff to manage the trafficking threat and has banned all trophy hunting shipments. It is a step in the right direction. 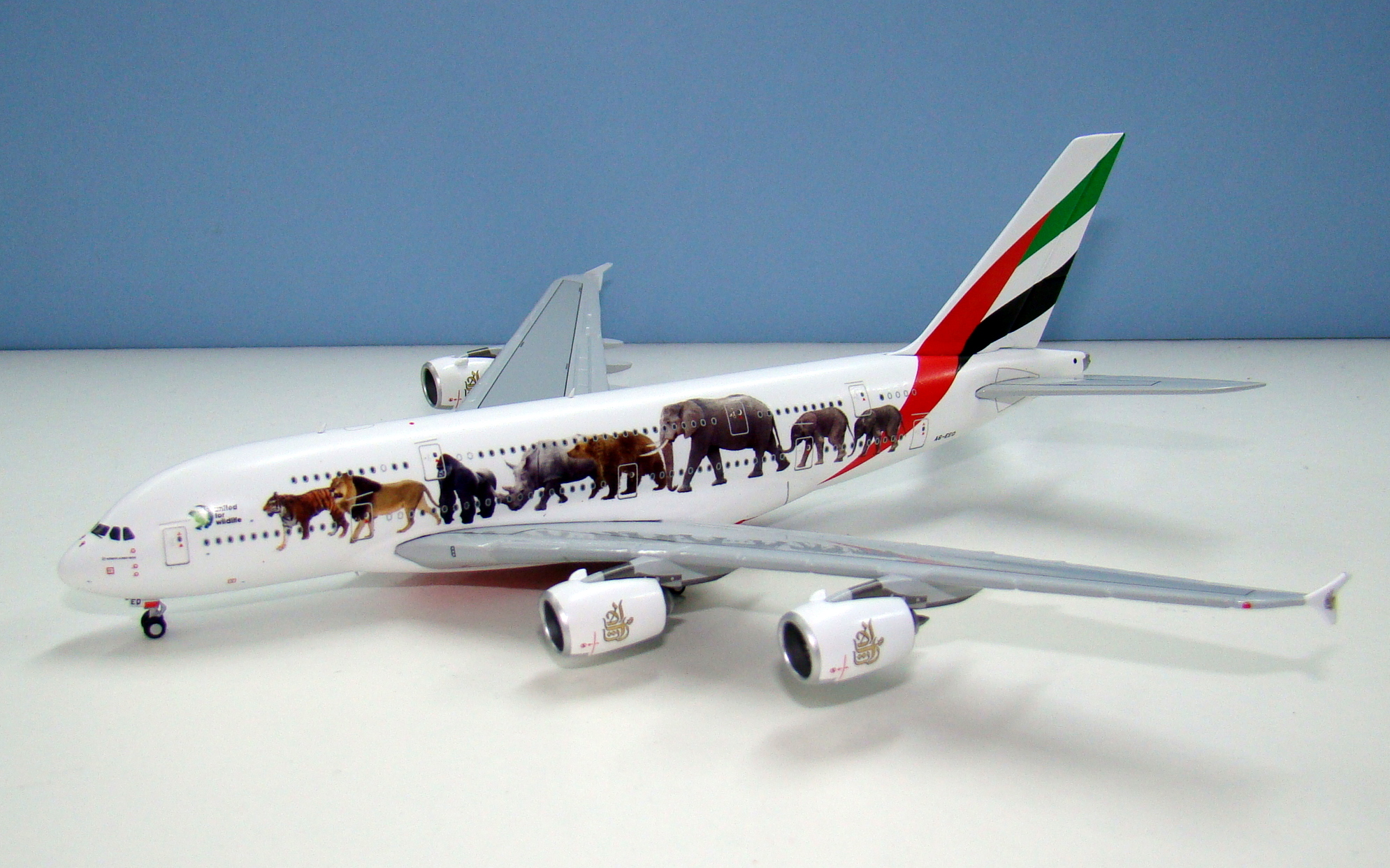 Whilst it may not quite have the grace of the Boeing 747 I for one think the A380 is quite an attractive jet (pretty much all Airbuses are). Living in Auckland we are lucky enough to see plenty of the type. Until recently it was possible to see 5 on the ground at once (4 EK and 1 SQ) but Emirates have shifted some of their trans-tasman flying to Qantas recently. Even with limited sales the A380 represents a very important type in the inventories of the 1/400 manufacturers.

It is the generally held wisdom that the Phoenix A380 is the king of the Whalejets but how does the JC Wings/Gemini mould stack up against it? Pretty well I’d say. As I recall it is the nose that most people have complained about, and this is an area of models I’m very sensitive too myself, but comparing the mould to photos I think it is a decent representation. That’s not to say it’s perfect as it is a little too long and pointier than the heavily rounded nose of the real thing. Nonetheless it looks like an A380 to me and is superior to many other moulds out there that don’t get stick.

The rest of the fuselage is well shaped as is the massive vertical stabilizer. Three of the four aerials are present with just the very small one ahead of the tail missing. The undercarriage is well placed and very nicely detailed. It doesn’t seem like the nosegear rolls and I don’t care. More importantly the tyre and gear leg are nicely made. 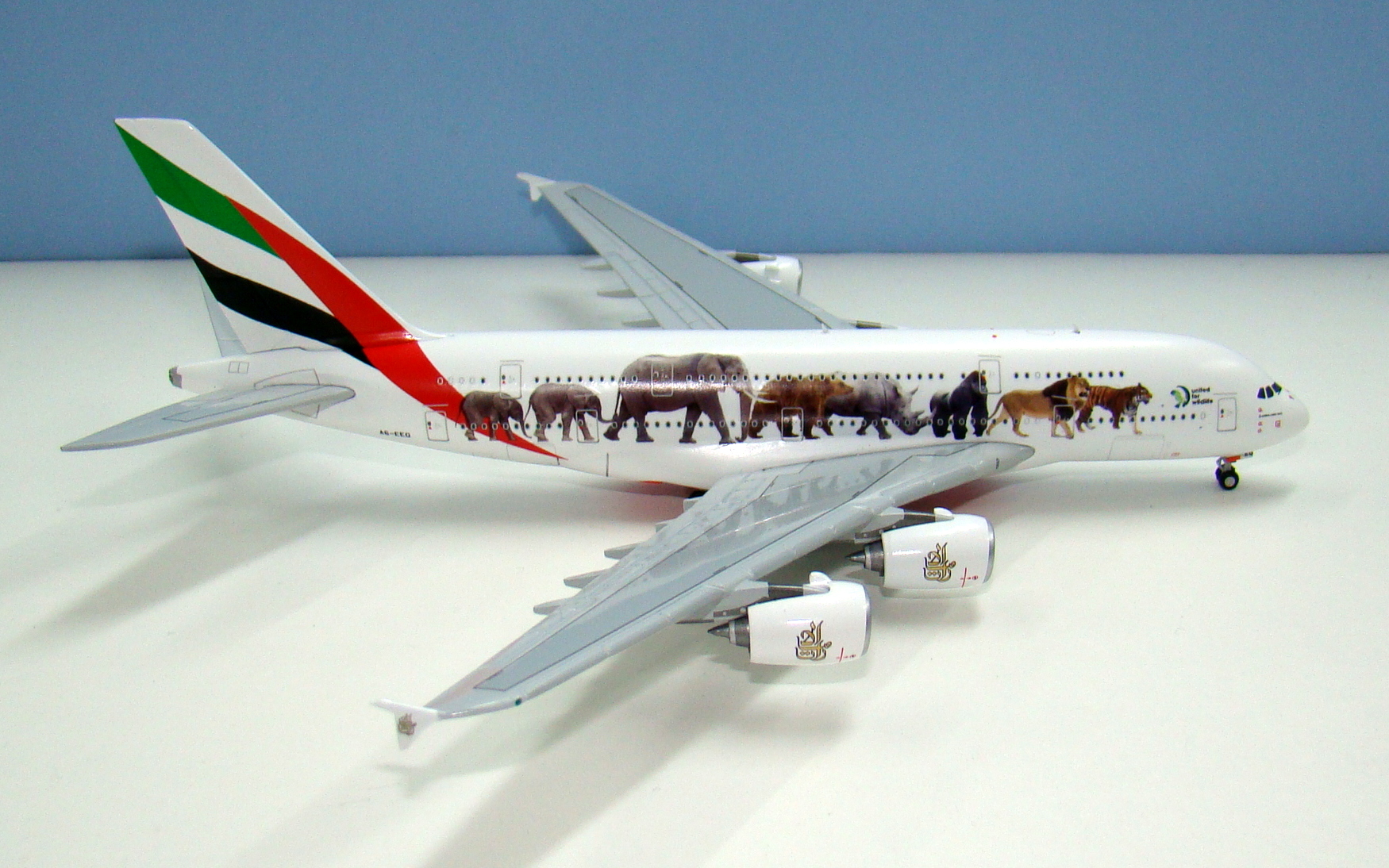 The wings are well shaped and fit tightly into the fuselage. They have a good and accurate join line and give the huge engines excellent ground clearance. Looking from the front I’m not sure the wings have quite the correct profile as they don’t curve strongly enough making the winglets almost at the same height as the fuselage top.

I think this mould is actually a very good A380 and it doesn’t suffer from some of the other issues that some newer JC Wings moulds have (incorrectly placed nosegear and too short tailcone). Certainly I have no hesitation in acquiring this version of the VLA.

The livery worn by both A6-EEI and A6-EEQ is broadly similar. The fuselage of the aircraft has a decal on it featuring six endangered animal species. From nose to tail these are: Tiger, Lion, Gorilla, Rhino, Bear and three Elephants (adult and two calves). The main difference between the two aircraft is a slightly different ‘United for Wildlife’ logo behind the first entry door. The decals cover approximately 40% of the aircraft and are over 40 metres long. Apparently they are the largest decals ever applied to an Emirates aircraft and took 900 man hours to apply over 2.5 days of effort by 28 staff. I have to say that I think it is a lovely scheme and suits the massive bulk of the A380 well.

The decals are photo realistic and impressively so is the printing applied to this model. There is no poorly defined design going on here, even under a magnifying glass the animals are crisp and clear. The entire design is also placed to perfection on the aircraft. It is a truly spectacular job.

Under different lighting conditions the animals sometimes look lighter than the model shows them but I have seen photos where the colours match to the model also. The only colour that I think might be out is the red sash on the tail flag, which looks a bit dark on the model. Nonetheless I want to impress on you how impressed I am with the quality that has been delivered here. 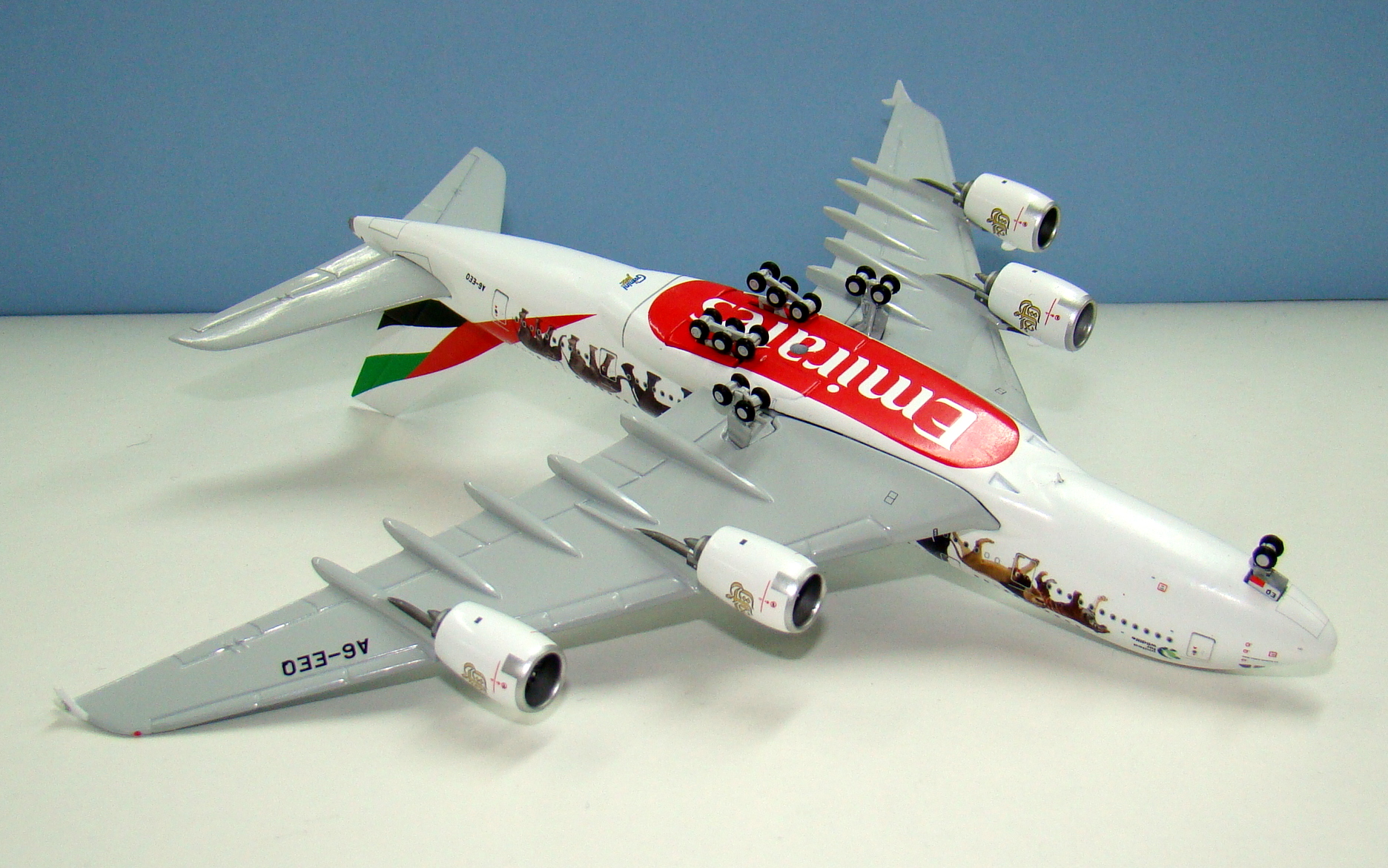 I have already said that I think the printing detail of the livery is excellent and this carries over to other details also. For such a large aircraft the A380 is surprisingly clean of external markings but from what I can see all are present. Even better there is no issue anywhere with printing quality.

The only area were the model let’s itself down is those blasted engine rims and fanblades once again. Both are bright silver rather than dark titanium – such a shame. On the plus side construction quality is great – there are no issues.

Being an official Emirates release this model comes in a bespoke red Emirates box, nicer than usual Gemini Jets boxes. Similarly the model is better than the standard quality and effort of Gemini Jets releases and you can’t help think they put more effort in to please corporate customers than collectors. This is a stunning model. I had expected a rather boring ordinary release but I am very glad to say that this model is a lot more exciting than I had reason to hope for. Great work Gemini.

August will certainly be a big month for JC Wings as the manufacturer has announced the release of 27 new models. A total of 14 1:200 scale models will be introduced as well as 13 […]