Of all the many aircraft vying for the right to be seen as the natural replacement for the DC-3 it was the Dutch Fokker F27 Friendship (license produced in the USA by Fairchild as the F-27) that probably has the best claim to the prize. Nearly six hundred were produced in a production run that spanned four decades from 1955-1987. With its place firmly entrenched as one of the most important civil aircraft of the 20th century it is good to see that despite its small size Aeroclassics is keen to celebrate the little Dutch marvel.

A large part of the F27’s success was down to the powerplant of the twin Rolls-Royce RB.53 Dart engines, however this ultra successful propulsion unit also powered various other competing types such as the Handley Page Herald, Avro 748 and Convair 600/640. The F27 however was an early adopter and along with the high wing, feedback from DC-3 customers and cabin pressurisation powered the F27 to global sales success.

The F27 was especially popular in Australasia being selected in Australia itself for both Trans Australia and Ansett-ANA and across the ditch in New Zealand for the domestic national carrier National Airways Corporation. NAC’s first F27, ZK-BXA, arrived in Wellington on December 12, 1960. She was christened ‘Kuaka; and entered service on December 22. This aircraft was followed by 7 further F27-100s (ZK-BXB-I) and then four secondhand, ex Aer-Lingus, aircraft in 1966.

The short F27 fleet was added to by a trio of longer series 500s delivered secondhand in 1973 (2) and 1977 (1) respectively. A gradual rollover of the oldest F27s began in March 1977 with 8 brand new F27-500s joining the fleet but only two of these would join the fleet of NAC since it had been agreed, against the wishes of staff, for the domestic airline to be taken over by its international brother Air New Zealand.

ZK-NFF arrived on May 3, 1981 and was named ‘Kerangi’ but by 1986 Air New Zealand was scaling back its regional prop services and replacing them with the operations of feeder airlines like Air Nelson, Eagle Airways and Mount Cook Airline. All of the newer F27- 500s were sold in mid-1992 to Merpati Nusantara of Indonesia after conversion to freighters. This aircraft became PK-MFK ‘Wangi Wangi’. She was damaged at Denpasar in June 1995 and seen stored at Suarabaya nine years later. By late 2009 she was derelict with no engines.

Only JC Wings can compete at all against Aeroclassics when it comes to turboprops in 1:400 scale and although they have a seldom used Fokker 50 they do not have its more popular parent, which leaves the field wide open for Aeroclassics.

There are actually two lengths for the standard F27 from Fokker (ignoring Fairchild F-27s and FH-227s). The F27-500 was a stretched variant with a 1.5m longer fuselage to accommodate up to 52 passengers. In 1:400 scale 1.5m only equates to 3.75mm however given the small size of the model that is a noticeable amount.

As I have discussed in my F27 Mould Review Aeroclassics actually used to have a longer F27-500 style mould but since 2012 has used a newer F27 mould that more closely fits the dimensions of the shorter F27-100/200. They have never had both moulds active at the same time, presumably the second was a replacement when the first became unavailable. Anyway what this means is that technically ZK-NFF is using the wrong mould since it is a 500 but the mould is that for a 100/200.

This isn’t a massive issue but if you’re looking it is apparent. Nonetheless the F27 mould itself is very good. The fuselage shape is lovely and the short nosegear and long maingear legs well recreated. Given the F27’s high wing the mould is a reverse cradle but the seam fits the wingspar attachment and wouldn’t be improved by a slot in wings version given the aircraft’s design. There is a second small seam at the tail to allow the horizontal stabilisers to fit in but it is small and follows the line of the lower rudder margin anyway.

This is a great little mould and although I understand the economic argument for not having a separate F27-500 mould (Aeroclassics do have an FH-227) I’m still knocking off a point for using the shorter mould here.

Initially I thought that Aeroclassics was justified in not using one of the registrations from the shorter F27-100 component of the fleet for this model, so as to match the mould being used, but it turns out they could have done. The post merger Air New Zealand scheme had a traditional cheatline rather than one that swept up onto the tail. Several of the ex-Aer Lingus F27-100s did join the combined NZ fleet and wear an Air New Zealand livery but initially one adorned with an orange shades version of the older NZ scheme (the colours were reminiscent of the last NAC “Wings of the Nation” livery although the shades were brighter). However looking a little deeper some of the old series 100s were repainted into the full Air New Zealand 1980s scheme. At the Ferrymead Aeronautical Site for example ZK-BXG can be seen wearing both versions. This looks like another research oversight by Aeroclassics as they’d have been better of using the short F27 registration for this model.

The Air New Zealand colours until recently famously used teal as a main colour – teal of course was the old acronym of Tasman Empire Airways Limited, Air New Zealand’s former name. In some lights the teal upper stripe of this scheme can look quite light, however I think Aeroclassics has done a decent job on the colour in this scheme. They do have a tendency to darken colours but type in ‘teal colour’ in Google and the colour looks accurate, plus it fits within the darker end of the spectrum of photos of this aircraft I have seen.

The position of the major livery elements on the model is accurate but when you look closer at the scheme it becomes apparent that the model is actually wearing different livery versions on each side! I would be very surprised if this was intentional but it is interesting. On the port side of the model under the cockpit within the cheatlines appears the Godwit logo of NAC and the bird logo of Air New Zealand. On the starboard side in their place appears the aircraft name ‘Kerangi’. Both of these are accurate but at different times. Upon delivery the aircraft had the airline logos, but on both sides. The cockpit anti-glare was also smaller at this time and didn’t meet the cheatline. A few years later, by 1985, and the airline logos had been replaced by the name and the cockpit anti-glare expanded.

This means that the starboard side of the model is accurate c.1985 whilst the port side is semi-accurate for 1981/82 albeit the anti-glare is incorrect. Missing in both versions however is the NFF registration suffix above the cockpit windows on both sides. I should also mention that to accommodate the mould’s shorter length there are 5 rather than 6 windows ahead of the emergency exits.

I’m a little conflicted about the double livery. Is it a feature or an error?

This is a very small model so there isn’t a lot of room, or need, for lots of extra printing detail. The livery is printed well and there are no quality issues with it. The rest of the printing is uninspiring. There is no suggestion in print of the large aerial above the cockpit or large portside air intake behind the rear maindoor. 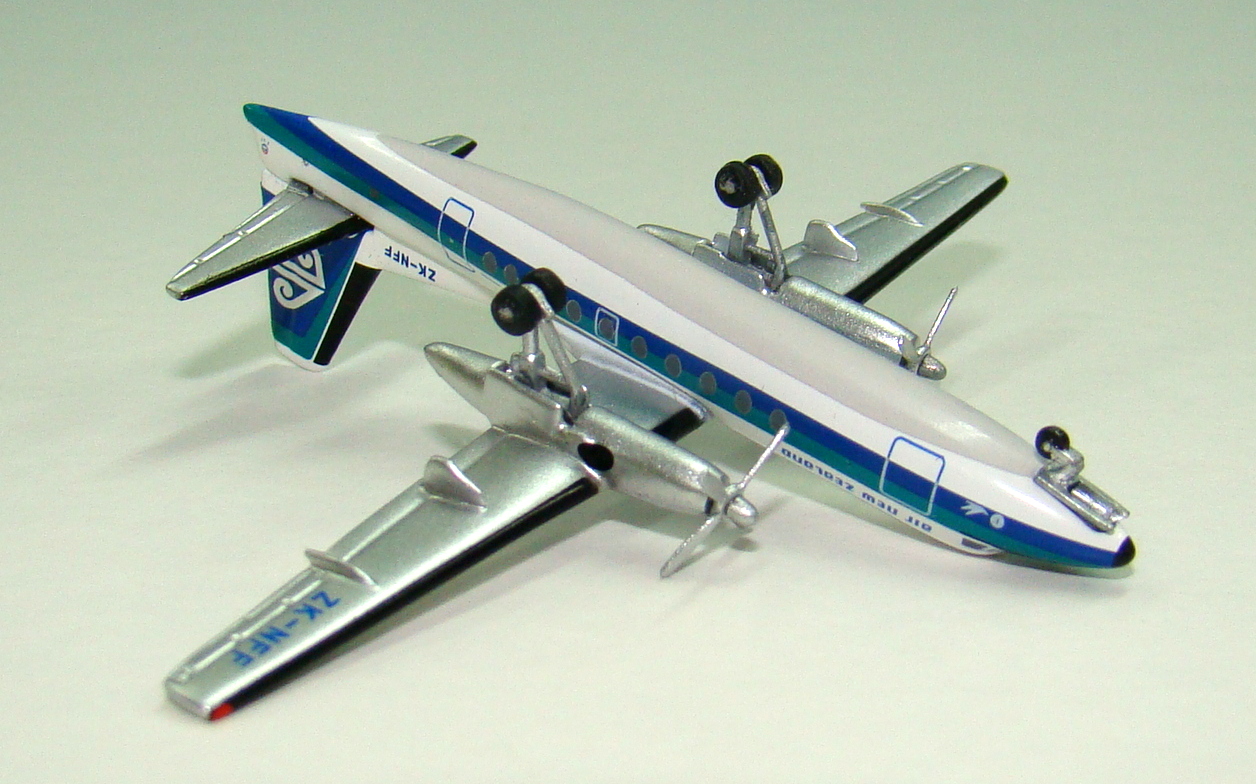 The engine exhausts are printed on but the darts have no other detailing and are the wrong colour. In all the pictures I have seen the engines are painted light grey but on the model they are silver. The same applies to the prop blades and spinners.

Another annoyance are the cockpit windows. In recent times Aeroclassics seems to sometimes print angry eye cockpits where the windows narrow at the middle. The F27 has large high windows whereas the model has thin rectangular windows. They should be higher. Construction quality is exemplary.

An Air New Zealand F27 is a most welcome model, especially since I live in Auckland. The model is a decent representation and I’m going to give the benefit of the doubt on the livery quirk. It is the printing and research that lets this model down a bit, not enough that I wouldn’t buy it but enough that it crosses my mind everytime I look at it.

NG Models grew in 2019 from a promising start-up into a manufacturer that changed the paradigm of 1:400 scale, and for me top of the pile were their new Tristars. So, it seems fitting that […]