It has been more than a decade since the Boeing 777-200ER was seen as the cutting edge of long haul airliners however the aircraft remains a solid and effective option especially for those airlines who cannot afford new 787s or A350s. Ukraine International is one such airline and the recent delivery of a quartet to Kiev gives JC Wings a good opportunity to showcase its new 777-200 mould, which as with many of its other widebody offerings comes in both standard and flaps down configuration.

Since the fall of the Soviet Union and Ukrainian independence the large Black Sea nation has been served by three major long-haul airlines. Initially Air Ukraine was the primary long-haul carrier with a fleet of classic Soviet era types spearheaded by the Ilyushin IL-62. Ukraine International was formed in 1992 with relatively more modern 737-200s but remained a short and medium haul carrier until 2014.

Air Ukraine had folded in 2002 and was almost immediately replaced on long haul flights by AeroSvit Airlines which used leased 767-300ERs. Over the next decade they built up a network covering Beijing, Shanghai, Bangkok, Delhi, Dubai, New York and Toronto but they too ceased operations, in February 2013.

The failure of its main competitor left Ukraine International as the Ukraine’s primary airline and it quickly picked up four former AeroSvit 767s and began flying much of the former network, including from April 25, 2014 New York. None of the 767s had particularly modern fitouts and offered a somewhat limited business class cabin in terms of seat quality and personal entertainment options.

The arrival of the first 777-200ER (UR-GOA) has introduced a significant upgrade to the Ukraine International product. Within business class they offer lie flat seats in a 2-3-2 layout and an individual IFE system. The aircraft are equipped with the Bruce Aerospace Sky Interior lighting system which is customized so that the lighting regime changes according to natural environment. The 361 seat three class cabin may not be state of the art still but provides decent value at the relatively low prices the airline charges.

Four 777s are scheduled for delivery with three presently in service. The first aircraft is a 777-2Q8ER originally delivered to Air Austral in 2005 whilst the other pair are both older 2001 build 777-28EERs formerly with Asiana. Currently the aircraft are scheduled on services to New York, Bangkok, Beijing and Tel Aviv. Given their relatively low lease rates and new fitout the 777s are good value to support Ukraine International’s growth in the medium term.

By the way if you’re wondering what Tryzub in the title of this post means it is the national coat of arms of Ukraine, featuring the same colours found on the Ukrainian flag; a blue shield with a gold pitchfork.

Last year JC Wings won my model of the year award with one of their 777-300ERs using their new 777 mould so the expectation of their new 777-200 mould is that it too should be a world beater given JC Wings experience with its big brother. Indeed, it is clear that they have based the series 200 moulding on the 300 as it shares a similar build look and this is certainly no bad thing.

Once again, this mould is a superb representation of a triple 7. There is absolutely nothing wrong with the fuselage mould. The shape is perfect and there is plenty of detailing like the scoop inlets on the underside forward of the wings and the complicated asymmetrical APU tailcone.

All the major aerials are represented on the mould and are nicely to scale. The forward satnav dome is nicely shaped and fitted although the smaller rear dome is only printed on and not in relief. Moving to the landing gear and it is intricately made and accurate, aside from the JC Wings standard light grey gearlegs and wheelhubs. As with the series 300 on the underside the maingear bay doors are not just printed but also indented as part of the mould. 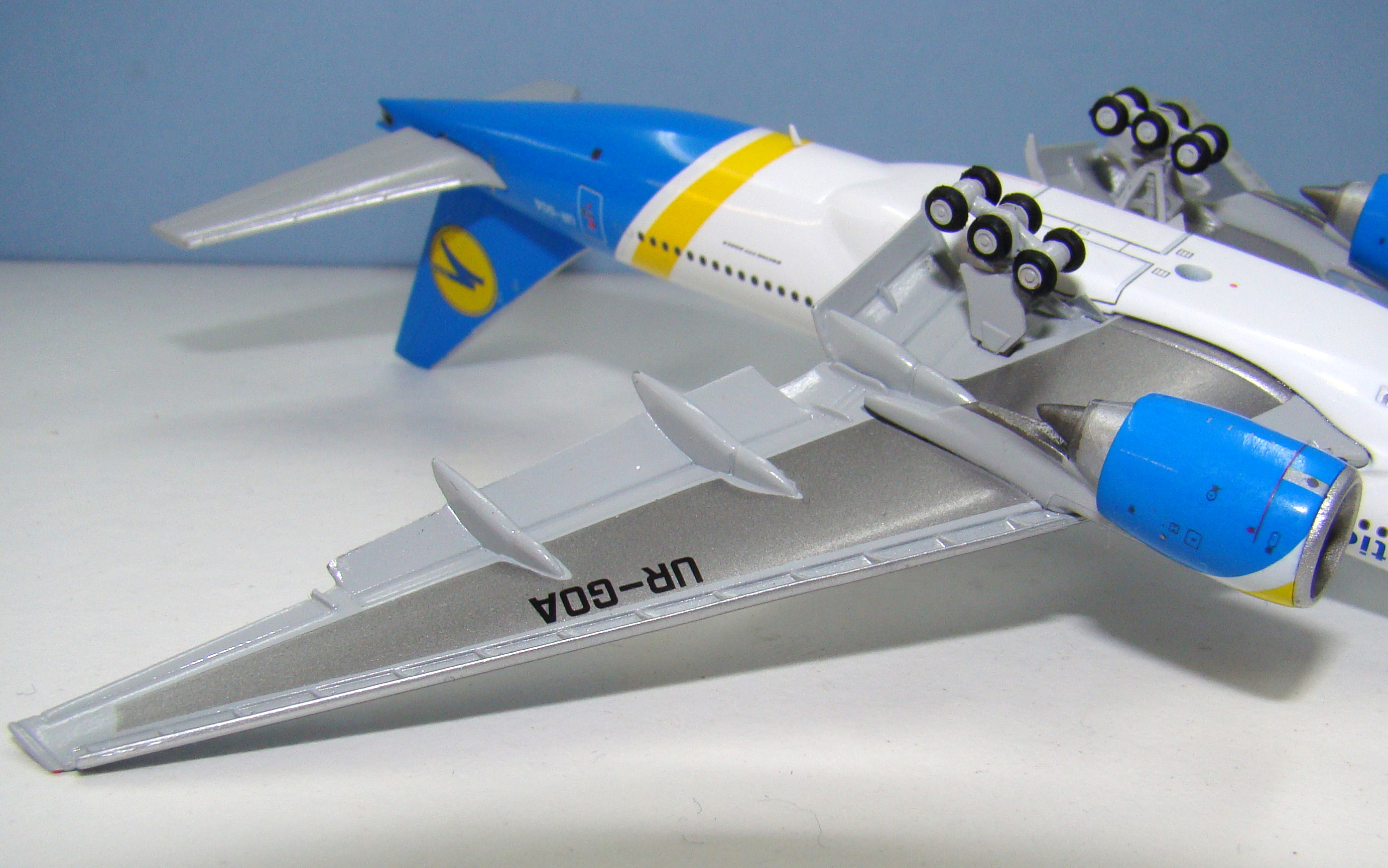 The engines and engine pylons are excellent and the see-through cores with separate fanblades are very good. JC have not gone down the rotating fanblades line as they have with the 787 and frankly the mould is probably better for it as the blades are more realistic and there is no extraq engine assembly (and thus seam lines) required.

This is the flaps down version of the mould and comparing with a photo of a 777 landing the detailing is very good. The wings look great and I really like the flaps down concept. It’d be hearsh to criticize that there is no gap between the large double slotted flaps as on the real thing it is a slim gap. Overall the shape and detail, especially underneath, is excellent. 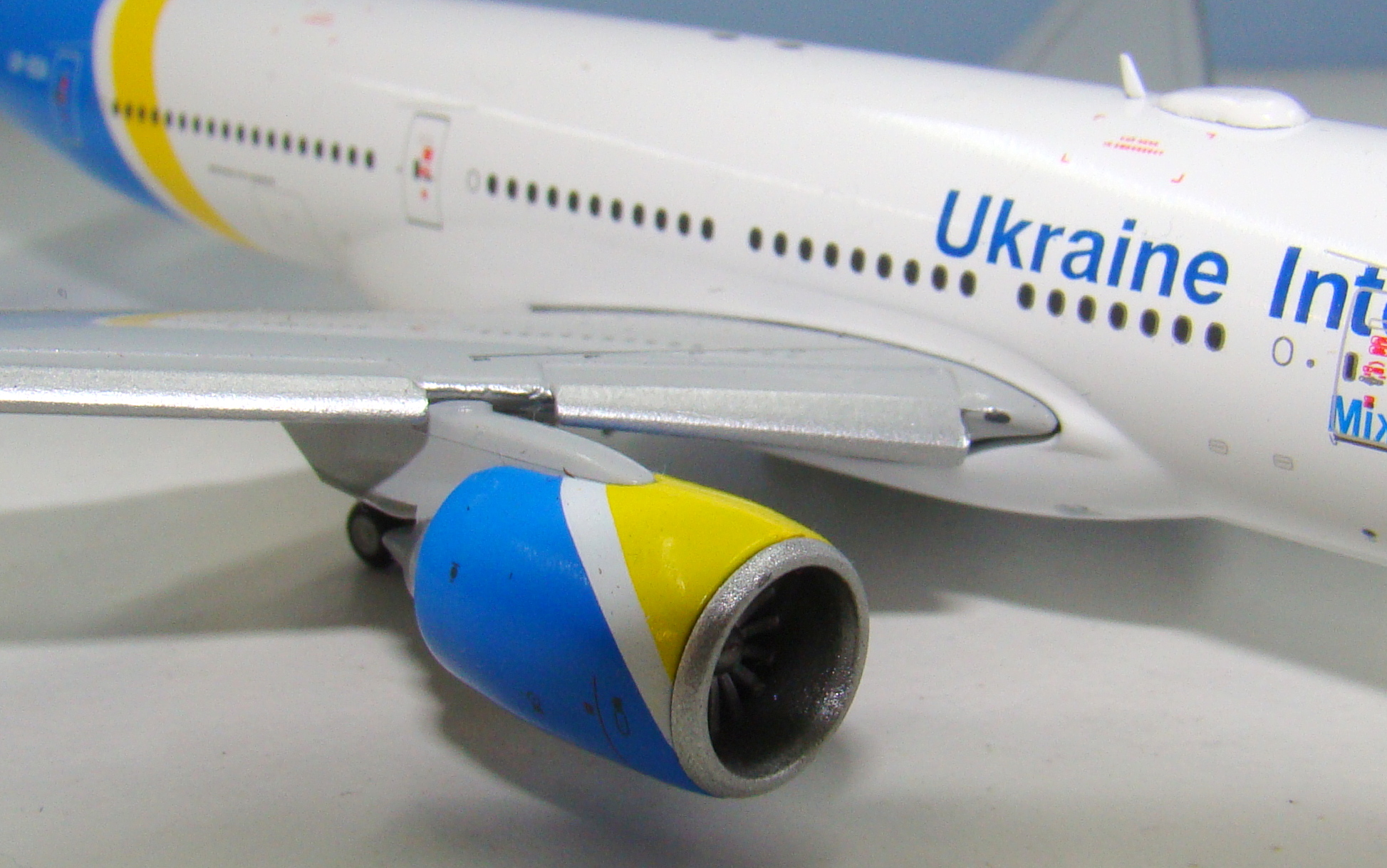 Since it is clearly based on the 777-300 mould it is not surprising that the 777-200 does repeat the only thing that could really be called a fault with that mould – the attachment point of the wings to the fuselage. The fit isn’t as tight as I’d like there is a noticeable gap.

Once again JC Wings easily trumps all previous competition with this series 200 mould but will it ever get the widespeard use it deserves?

The Ukraine International livery remains essentially unchanged since the airline began operations in 1992 with Boeing 737-200s, and why not? It is a very attractive and colourful livery that utilises the yellow and blue colours of the Ukrainian national flag to its advantage. The tail and rear fuselage is a light blue with a yellow band in front of it. The tail logo represents some kind of stylised bird in flight and the 777 has the national colours repeated on the engines adding a welcome splash of colour to what would otherwise be a eurowhite scheme.

I am happy with the colours of the livery. They are bold and so quite easy to represent but even so they are correct. Placement of the tail livery elements is good including the natural metal leading edge of the fin.

The remainder of the scheme looks good at first glance but in detail there are inaccuracies. The worst is that the engine livery is just wrong. The curve of the lines is clearly incorrect. On the model it is far too inclined towards the rear whereas on the real thing the line has two curves in it. The result is that there isn’t enough blue on the model’s engines.

I’m also not entirely satisfied with the main titles. The Ukrainian language portion is fine but the English text looks slightly too short for me. I am perhaps being too picky with this part of the livery. I’m not certain it is incorrect.

Everything else on the livery is properly done, which admittedly is mainly small things like the registration and the Ukrainian flag.

I almost don’t need to say much about the printing on JC Wings models as it is almost universally excellent – certainly way ahead of what Phoenix and Aeroclassics can manage and up there with NG Models and Panda Models. Once again, the detail here is fabulous with nosecones, ‘cut here’ panels and a wide range of other tiny details all across the model.

Build quality is also impressive, even the satnav dome is perfectly fitted. I have absolutely no complaints with the printing and build.

This model doesn’t fit my collection criteria at all, being both modern and not modern Chinese or Russian (the only modern airliners I collect from from these nations), and yet I am not sure I can part with it as it is such a nice example of a 1:400 scale 777. I feel I am being harsh on it by knocking off two points and the flaps down configuration on an already sublime mould is a beautiful combination. Yes I know JC Wings can’t release models on time to save their life, but the models they are making nowadays are usually top draw (except for the A320 and A330) and worth the wait.

HYJLwings debuted their new Airbus A321 mould in 2017 and up to the end of 2018 used it to produce a lovely range of A321s. Most were Chinese airliners, or Lufthansa, and they were produced […]