Collecting model airliners is a lot more fun with model airports and if you have a diorama or flughafen you are going to need ground service equipment (GSE) to make it look half realistic. GSE can be hard to come by so it’s great that Aeroclassics have released sets with several of their recent DC-8s. However GSE can’t mask a poor model so do Aeroclassics Eights stack up?

Swissair entered the jet age in April 1960 with the delivery of its first DC-8-32, HB-IDA, named ‘Matterhorn’. A further pair, IDB ‘Jungfrau’ and IDC ‘Piz Bernius’ joined in 1960 and all three were upgraded to series 33s soon afterwards. The DC-8s took over the long haul network from their predecessor the DC-7C although for its medium range network the airline unusually chose the Convair 990.

A fourth DC-8, HB-IDD a series 53, joined the fleet in 1963 and IDB was also upgraded to that standard. The other pair remained as turbojets and HB-IDA was renamed ‘Geneve’ in 1962. The rest of the fleet also gained city names, but the original unmodified pair of DC-8s had short Swiss careers and were sold at the end of 1967 being replaced by new DC-8-62s.

Both DC-8-33s joined the German charter airline Südflug International, HB-IDA as D-ADIM, but delays in their delivery led Südflug into financial problems as it needed to lease replacement aircraft at short notice to cover the summer period. At the time Südflug was the second largest charter airline in Germany but its problems led to a hostile takeover by Lufthansa on January 2, 1968.

Several ex-Südflug employees formed Atlantis Airways and the new airline’s fleet included D-ADIM. Sadly Atlantis collapsed on October 20, 1972 and this aircraft subsequently became HS-TGW with Thai Airways International in April 1973. Her subsequent career after further sale in 1978 saw her servce leases to Aeromar before conversion to a freighter by United Air Carriers. As N712UA and then N45908 she served leases with Egyptair, ONA, Saudia and Agro Air before joining Aeromar in March 1984 as HI-435. Her last identity was as HK-3178X with LAC (Lineas Aereas Del Caribe) Colombia. By 1992 she was derelict at medellin and breaking up began. Her total time in hours was 62,410.

This aircraft represents an early model DC-8, which in the fuselage is the same as the later DC-8-50 series, which I’ve already reviewed once. As I said then the standard DC-8 mould is very, very good and even more so when compared to the obsolete old Gemini DC-8 mould with the thick wings and ugly giant undercarriage, which admittedly is one of the oldest moulds in this scale. That however didn’t stop Gemini from slipping out a release using an updated version of the ancient old mould last year. The two moulds are simply incomprabale and there is no sensible reason not to be getting the Aeroclassics DC-8s and staying well clear of the old Gemini mould.

Where this particular version of the DC-8, and the mould, differs from the series 50 is the engines and engine pylons. These early DC-8-10/20/30/40s had either Pratt & Whitney turbojets or Rolls Royce turbofan engines. To cater for the enormous sound of the engines and improve reverse thrust Douglas developed a special noise suppressor system for the engines, which involved a daisy shaped silencer on the back of the engine and a moveable noise suppression ring / ejector sleeve that slid aft of the engine for takeoff and landing.

Aeroclassics developed this mould with new engine pylons and engines in 2014 and initial variants had far too large engines, which sometimes pointed at odd angles. This only afflicted a couple of releases however and nowadays the engines are much better. They also introduced a novel concept – that of moveable ejector sleeves allowing the model to appear with them deployed or retracted. The engine exhausts are not perfect but are pretty good, whilst the ejector sleeves move back and forward well. I’ve never had any issue with them coming free, although when deployed far back they do sometimes hang rather poorly. Still it is a great feature and very innovative.

As I stated previously the weaknesses of the mould are inconsequential to its overall appeal. They relate to the wing/fuselage seam join, lack of the DC-8’s single forward antennae and the usual simple Aeroclassics tyre hubs. In general this is a fabulous mould and hard to fault.

Swissair have always had a classic looking livery and the early jet scheme still looks great today. In fact I’d argue it is better than the chocolate stripe livery that followed it and certainly an improvement over the Eurowhite schemes of the 1990s. The scheme itself is actually quite simple but interestingly this Aeroclassics release does not appear to be wearing the exact delivery livery.

It seems upon delivery the aircraft had a silver tail portion under the Swiss flag area and its name ‘Matterhorn’ printed low between the cockpit and entry door. Later in its career however the lower half of the vertical stabilizer was painted white and the new aircraft name of ‘Geneve’ represented by a small coat of arms under the cockpit. It is this later livery variant that the Aeroclassics model represents.

Firstly the simple red and black colours are accurate. The vertical stabilizer looks great although the white cross is slightly too large. The cheatline is perfect and the titles almost so. The font used is good but the A in SWISSAIR is not quite the correct shape. The top is too pointy and the space in the A too small. The Swissair plane logo is also good but maybe too thin. These are all very minor issues barely worth mentioning. Less good is the coat of arms, which is missing on the model. It is a small feature but noteworthy by its absence.

Fingerprints and smudges are almost never found on Aeroclassics models and there are no printing defects on this model. Printing onto a base metal colour is hard but the various grills and marks near the nose are well presented as are the four starboard side belly cargo doors. The registration is correctly present on the underside of the port wing and topside of the starboard and the wing colouring looks good too. My only criticism is that the nose painting rather obscures the DC-8s characteristic nose intakes, but these are present in the mould.

Construction of the model is top notch as well. The DC-8 mould is rather known for the tyres coming off the gear legs but that isn’t an issue here. In addition all the moveable engine parts are fitted properly and move easily. 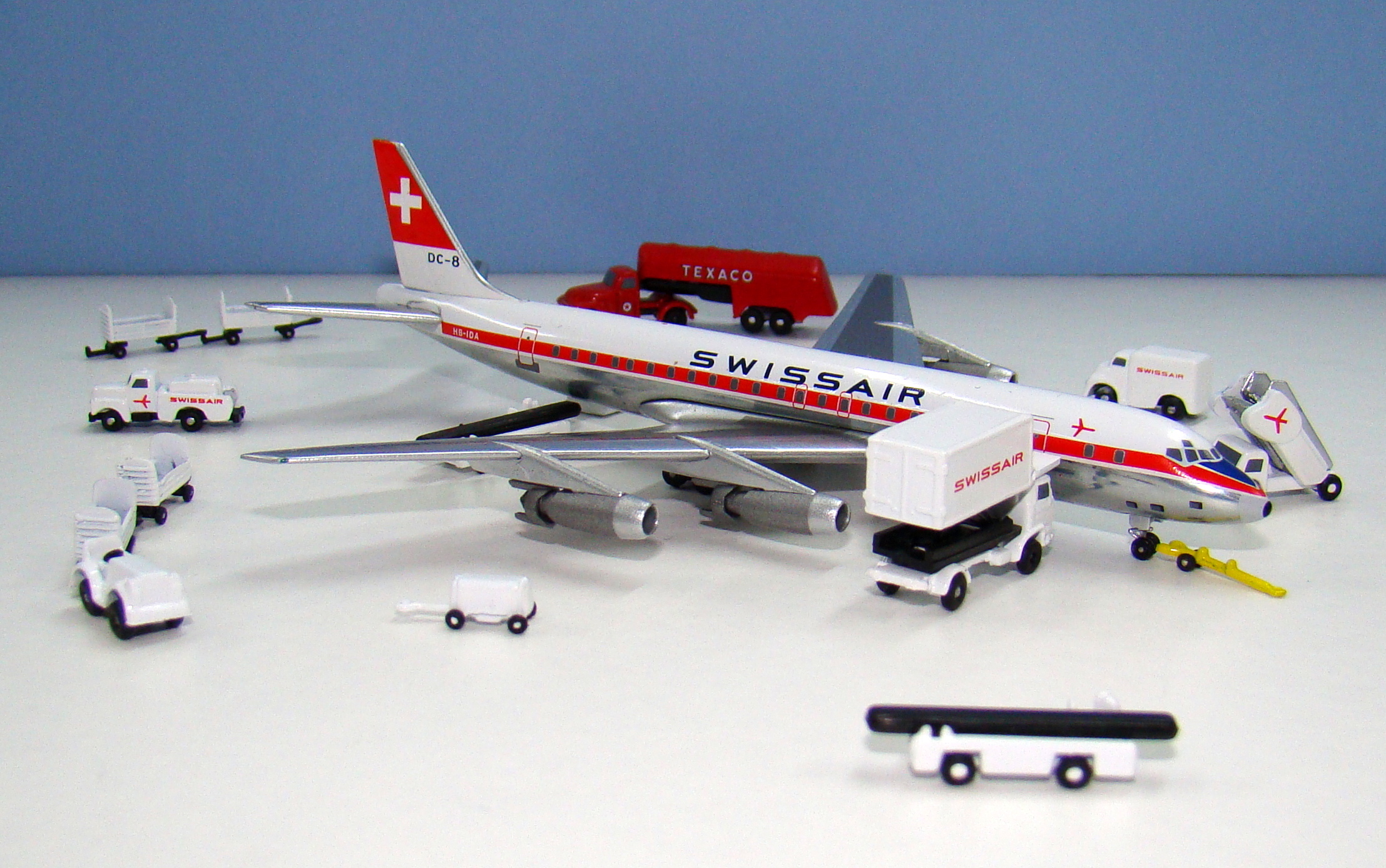 It is a massive bonus that this model comes with a 15 piece GSE set, albeit one that does cost a $10 premium on top of the usual price. I think it is well worth it myself. The GSE is the same as in older Aeroclassics sets and very nice, if a little generic. There is a good variety of different vehicles and several have moving parts (airstairs, food truck, baggage loaders). I particularly like the red Texaco fuel truck. I have heard complaints that the GSE with Aeroclassics models is often not very accurate and I don’t doubt that is true. Nonetheless it is most welcome. If there is criticism to be found it is in the rather simple paintjobs applied. Only 5 elements have any Swissair branding on and all are painted largely white. Ideally the airstair sides, radiators, bumpers and such would be grey or silver (or more detailed). I’m not sure how to accommodate the GSE into the scoring but it seems wrong to ignore it so what I’m going to do is add 1 mark onto the model for it. I know I paid extra for it but $10 is not a lot to pay for 15 pieces of GSE and the model looks great when paired with the set.

I am an unreserved fan of the Aeroclassics DC-8s and very pleased that they took the time to modify the DC-8 mould to replicate earlier variants than the series 50. With this model Aeroclassics has shown what it is capable of, whilst the addition of a GSE set is a real treat. The model may not be perfect and the livery saved somewhat by its sheer simplicity but I’m not going to let that detract from a first class release. With the added point for the GSE this model scores very well indeed.

The Ins and Outs of Creating a Custom Model

Ever wanted to create your own custom model? Our new Custom Creations series will focus on just that, custom model building. We’ll highlight to custom models developed and crafted by model aficionados worldwide. This week […]