Unsurprisingly, given its grounded status, there have been few new releases of Boeing 737-8 MAXs in the past year with a few trickling out from Phoenix and not much else. Aeroclassics seems to have rather given up on its MAX mould, which is probably for the best. JC Wings on the other hand have such long release windows that this model, which was announced in 2018, only hit the stores in China in March 2020 and seemingly few made it outside of the home market. With the MAX rapidly approaching re-entry into service, whether the airlines want or need them any longer or not, it is a good time to take another look at the type. 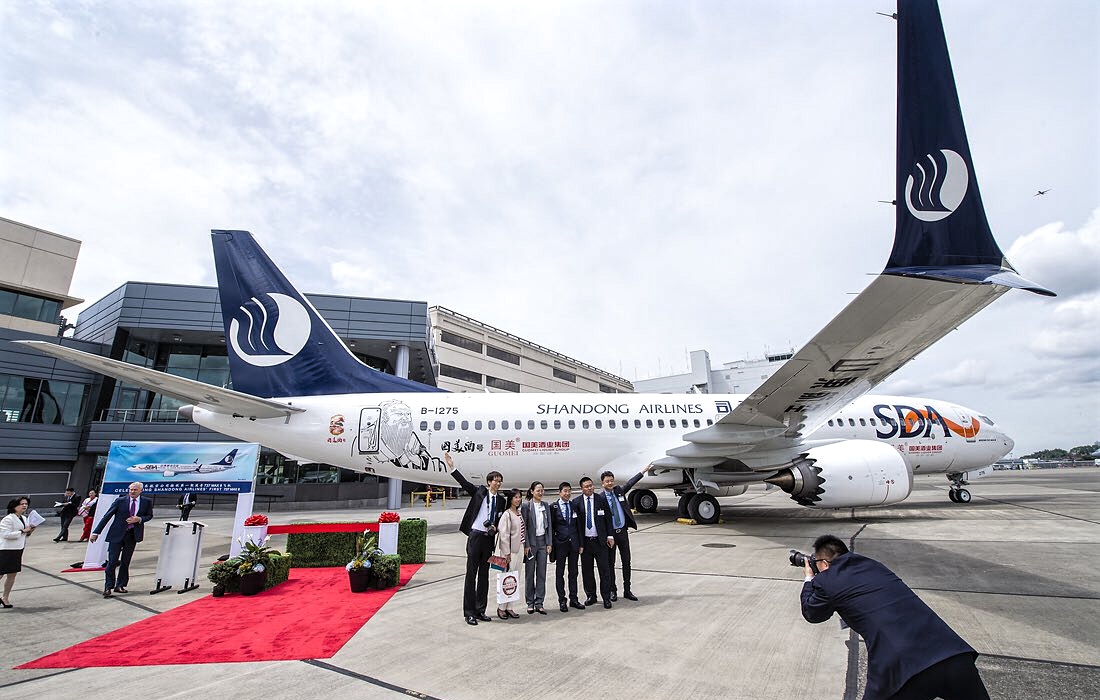 Shandong Airlines, as its name suggests, is based in the capital of Shandong province, Jinan, in the North-east of China, close to the enormous Beijing / Tianjin mega-cities. The province is home to nearly 100 million people, so it is no surprise that in the early days of Chinese liberalisation of the air market it quickly gained its own airline, financed by a wide variety of provincial government bodies and businesses.

Although formed in 1994 it wasn’t until March 1996 that its first aircraft arrived – a trio of new Boeing 737-300s. Since then the airline has survived where other similar startups from the time, such as Wuhan Airlines, have not and it avoided being swallowed up in the airline rationalisation of the early 2000s. Nonetheless by late 2003 it was searching for a partner and found one in the form of Air China who paid 500 million yuan for a 22.8% stake in March 2004.

This stake has subsequently been enlarged, so Shandong is a full subsidiary of Air China, however it hasn’t led to the disappearance of Shandong’s identity. Quite the contrary the fleet has grown massively from 16 aircraft in June 2005 to 128 today. The backbone of this expansion has been the Boeing 737 so it was little surprise in April 2014 when an order for 50 more units was placed, 343 of which would be new 737-8 MAXs.

Shandong received its first 737-8 MAX, B-1275, on June 4th 2018 and 7 were delivered by the time the type was grounded around the world on March 11, 219. In fact, Shandong had only received its 7th MAX 9 days earlier. The grounding of the fleet had a negative impact on the airline, which lost more than CNY28.5 million ($4.14 million) in the six months ending June 30th. The MAX wasn’t the only factor, currency fluctuations and increased competition were also cited, but it certainly helped.

The first MAX for Shandong wears a special scheme to advertise the Guomei Liquor Group, which has a major base in Rizhao City, Shandong. Guomei specialises in the production of Baijiu, which is apparently the world’s best-selling liquor selling more than whisky, vodka, gin, rum and tequila combined. Given the Covid crisis whether Shandong Airlines has any desire to puts its MAXs back into service is debatable but the airline still has 27 more on order.

In my opinion of the four existing 737-8 MAX moulds there are really only two contenders, and those are the moulds from Panda Models and JC Wings / Gemini Jets. Unfortunately, the seeming upheavals at Panda mean that they have not used their MAX mould for well over a year now and it is unclear whether they still have access to it.

The JC Wings MAX is a significant improvement over their older 737-800 and uses a completely new fuselage. The nose is a major improvement and looks great. The only criticism is that the curve down to the cockpit windows is a little angular. The rest of the fuselage is excellent although the tailcone is perhaps a little too blunt.

JC have gone to some length to improve the undercarriage, which was one of the, literally, biggest issues with their 737-800. Although the nosegear doors are maybe a tony bit too short they are well-sized and follow the form of the lower fuselage as they ought to. The longer Max nosegear looks great unlike that of the Phoenix mould.

The wings, winglets and engines are superb. The shape and detailing of the engines and their associated pylons is very good. At the tail and the JC Wings version is very closely fitted so there is no space under the rudder as on the real thing and the Panda mould. 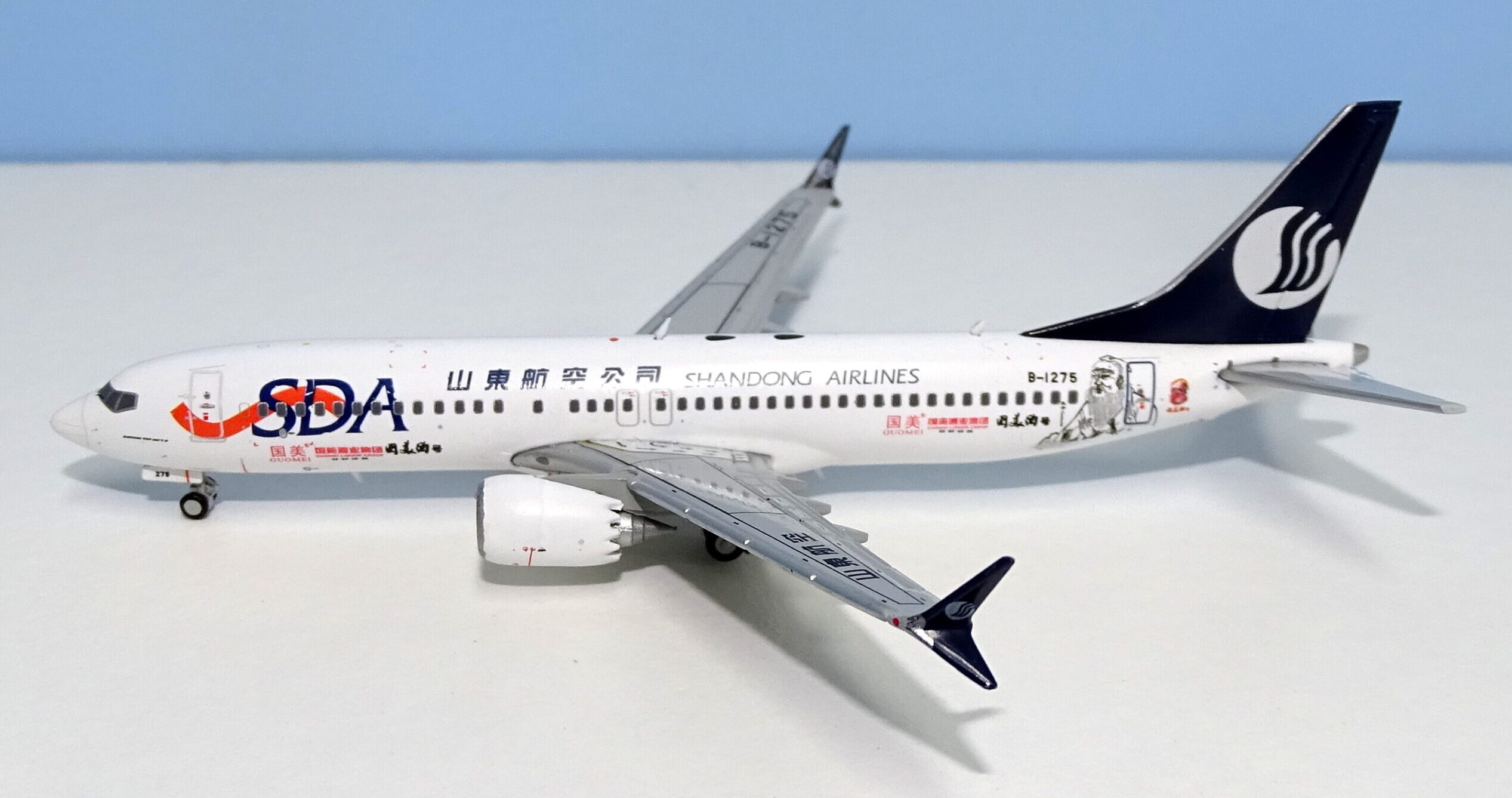 On this model all 5 aerials are represented (including the underbody off-centre one) however I do think that all the aerials are slightly over-sized. Overall, this is a very nice 737 and all my criticisms are minor. I prefer the Panda Models mould by a small margin but in its absence, this is a much better MAX than the alternatives. 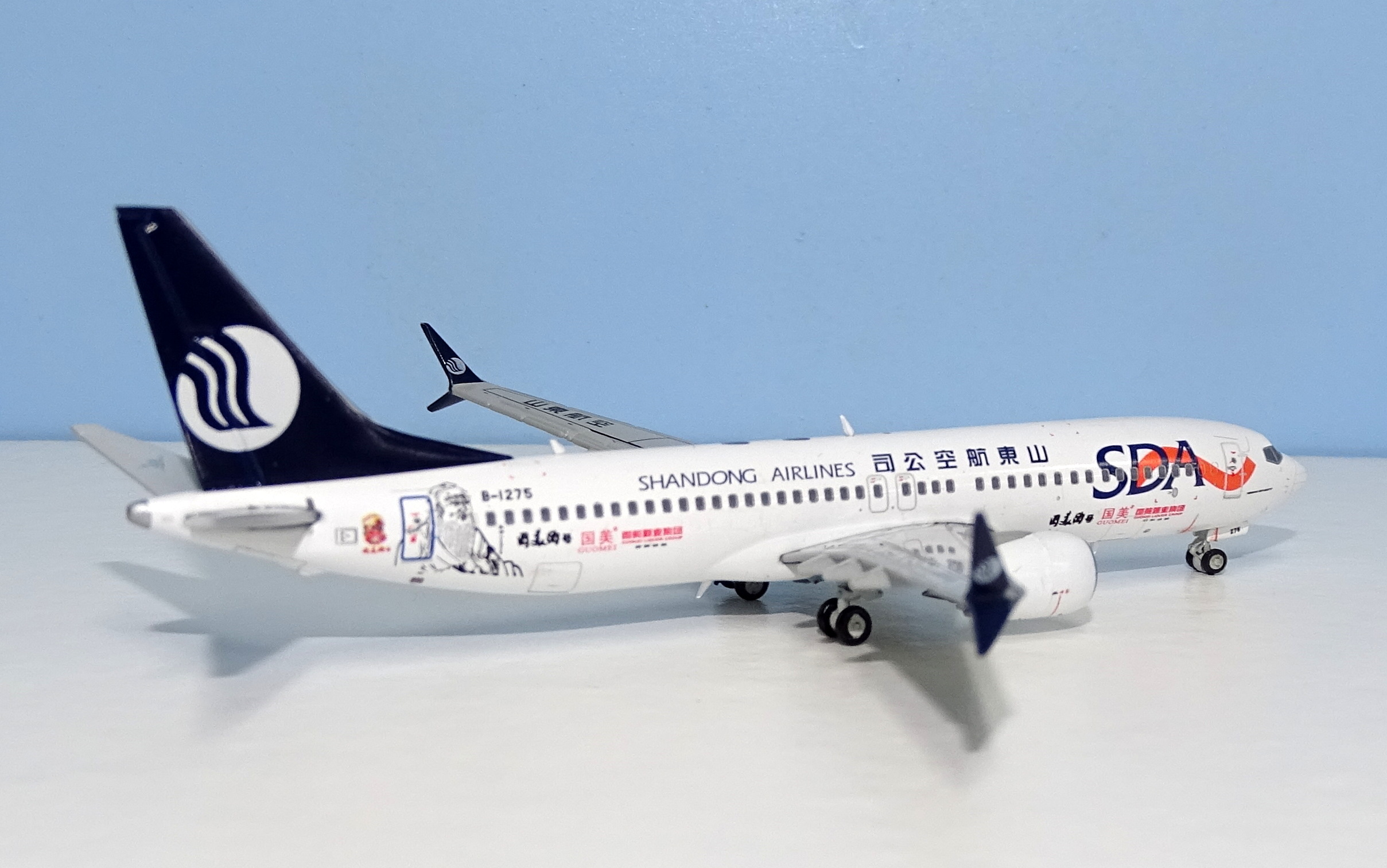 Shandong has never attempted much of a livery and it has remained unchanged since the airline’s creation in the mid-90s. Nonetheless, the orange wavy stripe through the large SDA titles adds a bit of interest. This model of course is wearing the Guomei special colours, which for reasons that escape me feature a picture of the Chinese philosopher and poet, Confucius, who was born in 551BC. Presumably there is some link with the brand or Baijiu itself? 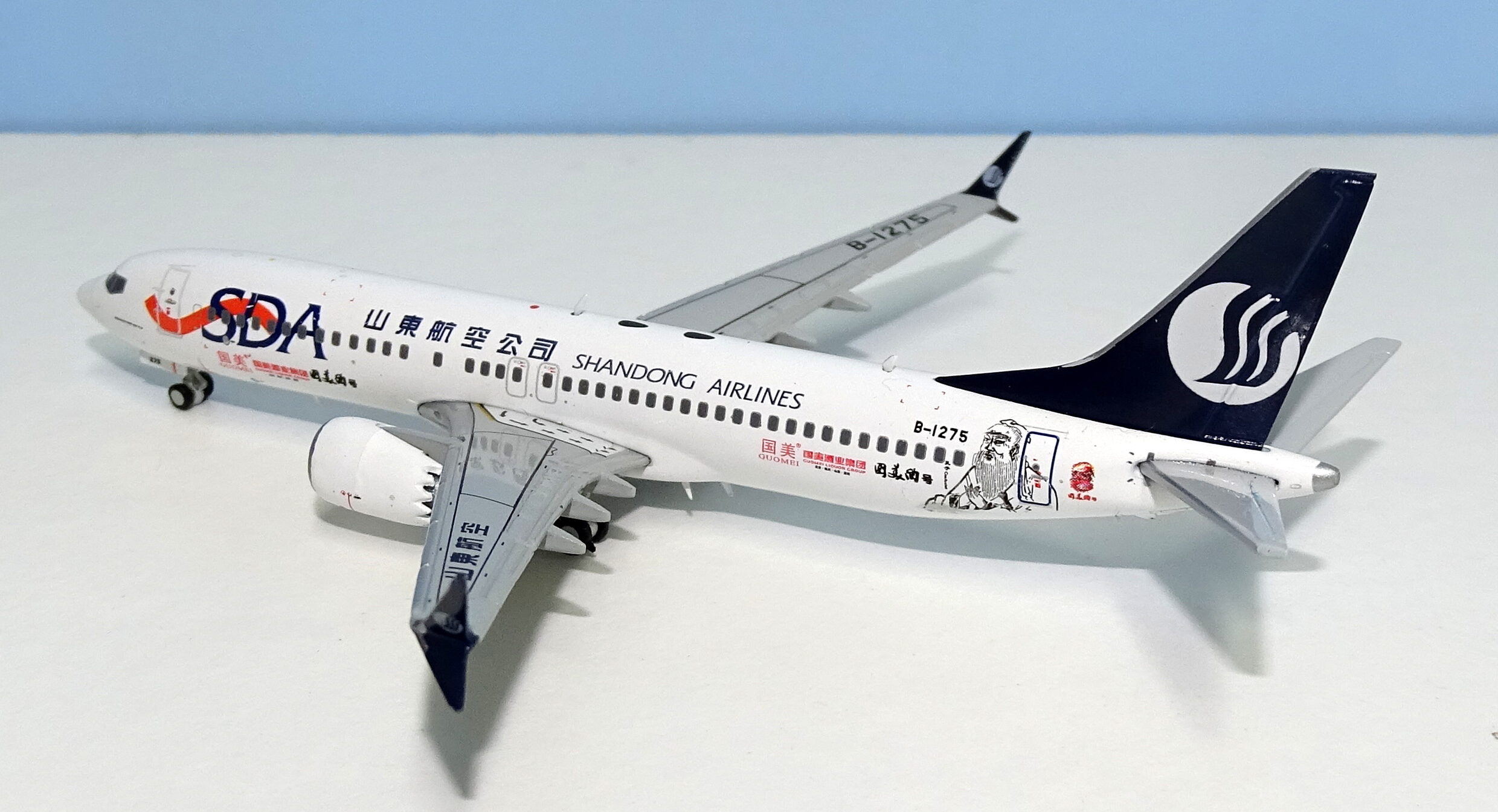 The standard livery elements on this scheme are 100% accurate, which given its simplicity you’d really expect. The Guomei logo and associated text, which is tiny but readable under a magnifying glass, is very nice too.

The image of Confucius is a line artwork and very hard to replicate at 400 scale. JC have done a decent job with it but I do note that the angles at the lower portion aren’t completely accurate and that the face, beard and hands should be grey and not dark blue. This site has a good image of the Confuscius logo. The image behind Confucius is some form of landscape leading up to a mountain set within an oblong. It fits with what I can see in photos, which at this size is a real challenge! 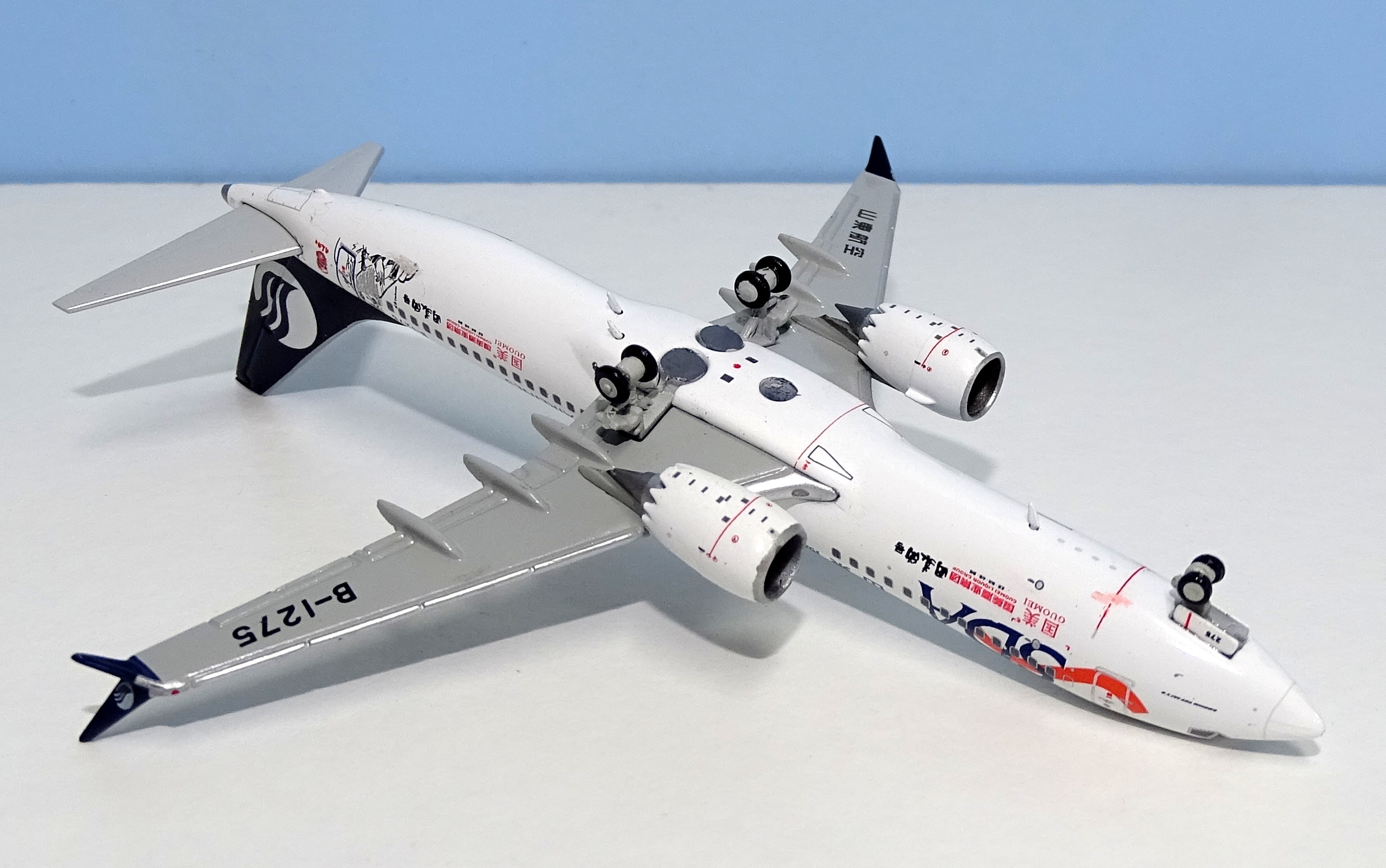 I have mentioned many times that I really like the printing detail JC Wings are able to add to models and this one is no exception. The tiny lettering has been printed with exquisite detail and on the aircraft’s underside the number of lines and dots is bewildering. The engine inners are a nice dark titanium, but not too dark and certainly not black.

Given the quality of the rest of the model it is a shame that JC have let themselves down somewhat with the build aspect. It has become a regular problem for several JC Wings slot in moulds that they cannot apparently attach both wings properly. Over the past few years countless A320s, A330s and 737s have had one or both wings attached so that they are way too high. The problem has lessened in recent times but this model illustrates that it is still a concern.

The right wing is fitted tightly but at a higher angle than the left wing so that the maingear doesn’t sit flush on the ground. In addition, the right-side engine points upwards a little. To be fair these issues only really become apparent when you’re taking close-up photos but that is little excuse. I actually bought the standard Shandong Airlines colours release of the MAX to go with this and it has no issues so they do get it right much of the time.

Despite its current problems and the Covid crisis surely the MAX is going to still be a major airliner in the coming decade and so it is salient to keep an eye on the moulds available in 400 scale. This is a good little model, and much better than JC Wings other Airbus and Boeing narrowbody moulds, but obviously the poor build quality distracts a little from what would otherwise be a fine score.

Model Airliner Magazine Issue 5 is now available for pre-order and will begin shipping on November 24th!  You won’t want to miss this month’s issue which features our 2017 Holiday Gift Guide and a History […]