Welcome to the first of hopefully many model reviews partnering Yesterday’s Airlines with “The Diecast Flier”. In these reviews I will do something that until now I’ve avoided – reviewing individual models rather than the model moulds or the history of airline operations. There’ll still be some of the latter two areas in these reviews but this new partnership gives me the opportunity to take a closer look at models that I often wouldn’t usually purchase.

As those of you who are familiar with my site and collecting habits already probably know I don’t buy many Gemini Jets anymore – in fact of the 226 models I have purchased in 2015 and 2016 only two have been Gemini Jets. That isn’t to say that Gemini don’t make great models, they do – sometimes. In general though Gemini’s output of mainstream modern airlines and airliners rarely fits my collecting criteria.

However in this review I’ll be looking at both a mainstream airline and modern airliner in the form of Gemini Jets recent 1/400 scale release of the new Lufthansa Airbus A350-900 D-AIXA. My wife is half German so this is a rather fitting release for the basis of my first Diecast Flier review. Let’s get started…

Lufthansa’s A350s are fitted in a 293 seat configuration with 48 Business, 21 Premium economy and 224 Economy class seats. Though delivered in December Lufthansa Technik is fitting out Lufthansa’s A350s with premium economy seats and other features such as a self-service area for business class passengers. This delayed service entry of the first aircraft on long-haul routes until February 10, when D-AIXA was used on the Munich-Delhi route as flight 762. The first ten of the 25 A350s will be based at Munich, replacing A340-600s. Lufthansa actually slipped in the type’s first commercial service on February 9th, operating LH350 – a roundtrip between Munich and Hamburg, where Airbuses’ Finkenwerder plant is located.

The first ten A350s will all be in service by the end of 2018 with deliveries of all 25 not complete until the end of the first quarter of 2023. This is a fairly leisurely schedule but no doubt takes into account Lufthansa’s tentative restructuring of recent years and the pushback it has received from staff, especially the pilot union.

The second Lufthansa A350 is scheduled to enter service on March 14 flying between Munich and Boston. It’s a shame to see twinjets replacing quads but Lufthansa’s simple but stylish scheme is worn well by the A350, which in my opinion is a much more attractive jet than the 787.

The format for my reviews will be to look at a model split into three key areas:

First things first, as with most of Gemini Jets mould back catalogue this is really a JC Wings mould. In fact as far as the two brands go nowadays they are effectively interchangeable since Gemini Jets are made in the JC Wings factory. This isn’t necessarily a bad thing since combining both manufacturers back catalogues gives a huge range of moulds which can be used and JC Wings seems to spend a lot of money upgrading the moulds too. Putting them together is another issue but we’ll discuss that in the quality section.

The undercarriage is correctly scaled, delicate and finely made, with excellent legs and correctly sized tyres. This contrasts with the Phoenix mould, which has seemingly oversized gear legs and tyres. The engines are well off the ground and tightly fitted to the pylons – again superior to the huge ground huggers on the Phoenix mould, which literally are touching the ground on some releases. I hadn’t noticed before that the engines are hollow, with beautifully defined fan blades fitted, meaning you can see all the way through them – a nice touch. The aerials and satnav dome are well sized and tightly fitted. If only Gemini and JC Wings could do this kind of thing with their narrowbody moulds, which are too often fitted with oversized gears and antennae. On the minus side the engine exhaust cones are not the correct shape – more on these later.

There are a few other small compromises which may annoy some and a comparison with the Phoenix A350 shows the different choices the manufacturers have made. The JC Wings / Gemini A350 comes fitted with only two of the five antennae. It is missing the two underbelly ones and the most rearward. They are very small and I can understand the omission, however they are fitted to the Phoenix mould. In addition the small mid-length fuselage top comms bumps are only outlined and not elevated out of the fuselage as on the Phoenix. Personally I prefer the overall mould look to be better and there’s no point in favouring a mould which may have extra details but fails to get major things correct. As such I much prefer this JC Wings / Gemini Jets mould to the Phoenix, which in fact I steer clear of. Having said that the engine issues and lack of some aerials keep this from elevating to true greatness.

Lufthansa is very conservative when it comes to its livery, despite the relatively radical shakeup of its business model over recent years. It’s a simple Euro-white scheme but it looks good on almost anything (perhaps it wouldn’t look good on a Deux-Ponts!). So it really ought to be dead easy for our model manufacturers to get this scheme correct since it’s mainly a deep blue tail, plus logo, simple Helvetica blue titles and a grey belly. That didn’t stop Phoenix recently bungling their Lufthansa A340-600, which had a very dark grey belly, but how have Gemini done? 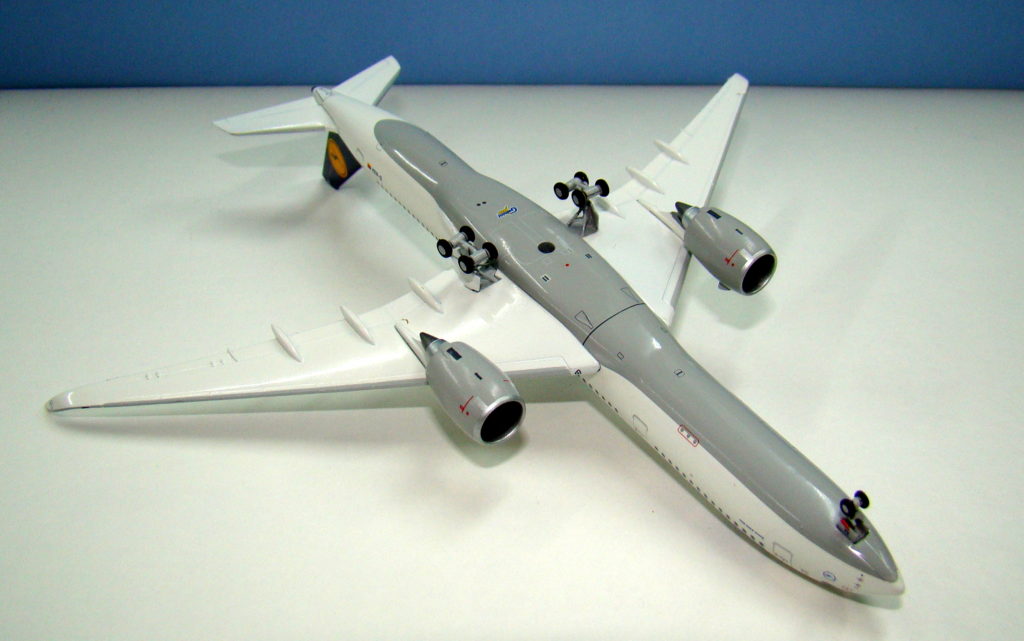 According to Lufthansa themselves (see here) these are the correct colours for their scheme:

Now I have to admit colour is not my strongpoint but comparing the model to these I haven’t got any complaints. Gemini has made 28 Lufthansa models in 1/400 so you’d expect them to get the colours correct by now.

How’s the white base? Without other Lufthansa models to compare to its hard to say, but neither me or my Mrs could determine any difference between the wing tops and fuselage so at least it’s uniform. It may be a bit too dull, but it doesn’t really bother me – though it might if I had a full LH fleet. One area where the colour definitely isn’t correct is the engine exhaust cones. A deep blue on the real thing they are silver on this release. Engine component colours are a common error point in this scale but this one is quite obvious. Another place where components aren’t correctly coloured is the undercarriage legs and hubs. They should be silver but are light grey. Again not ideal.

There is another livery area where the model isn’t perfect too. The extremely fine Lufthansa logo on the inner and outer side of the winglets is well rendered but oriented incorrectly. The crane is pointing noseward at about an 11 o’clock angle compared to the real thing which is more like 9 o’clock.

This is an area that Gemini and JC Wings have been struggling with recently, with models coming with scuffs and fingerprints etc. Even worse they have also been arriving with wings unattached and printing damaged. I should say that Donald at DGPilot (https://www.dgpilot.com/) checks his models prior to sending so as you’d expect there are no glaring flaws. In fact I have to say that the printing quality of this model is superb all round with amazing details.

I’m particularly impressed with the details on the doors and around pitot tubes – excellent work. I have been over this model with a magnifying glass and, while I admit that is sad, it has shown a couple of probable, if very light, finger prints. One is a feint finger end sized circle on the port side around the maindoor. It’s most obvious near the ‘Airbus A350-900′ wording. The other is a very fine smudge just under the windowline on the starboard side near the wingroot. These are both very fine and hard to see with the naked eye. As such I feel very picky pointing them out – then again this is meant to be a detailed review and it’s not a cheap model!

I also notice that the Star Alliance symbol on the starboard side is very feint at its top – almost like it’s been slightly rubbed off – this is more obvious. The model is well put together, except the nosegear does have a slight but noticeable rotation to the left. You can just make it out in the above and below photos.

These small detail issues are perhaps just unsolvable with the way the models are made, but given Gemini’s recent price hikes they aren’t as easily waved off as they used to be. Nevertheless on this model they are minor and in general this A350 passes the quality check for me. Hell it has both wings attached so beats my other A350 using this mould (which is admittedly a JC Wings release)!

I have to say I am surprised how much I like this model, which is well outside my collecting criteria. When I first got it I thought it was awesome, but taking a much closer look little detail flaws have appeared, which have limited its final score. Even so they don’t harm the model too much and as long as yours comes with everything attached and no giant fingerprints I think it’s a keeper. If I had a larger LH fleet and the white colour is a real issue I might reconsider my opinion, but since I don’t I’m more than happy to add it to my collection.

China is without a doubt the current hottest spot for aviation in the world. The fleets of the Chinese majors have ballooned in the past decade to make them some of the largest airlines on […]