N584NW is a Boeing 757-300 that was originally delivered new to Northwest Airlines in October 2002. The aircraft flew with Northwest Airlines for almost six years, but in April 2008, Northwest and Delta merged to become Delta Air Lines. In January 2009, N584NW (Ship 5804) officially transferred over and became part of the Delta fleet. In March 2014, N584NW went through a fleet-wide interior overhaul and and was equipped with the Aviation Partners winglets to match the rest of Delta’s 757-200 and 300 fleet. Delta’s 757-300 aircraft have a seating configuration of 24 First Class, 32 Delta Comfort+ and 178 Economy seats. The airline currently has a fleet of 16 757-300s which are mainly used on heavy domestic, hub to hub and West Coast to Hawaii routes.

Gemini Jets released their version of Ship 5804 in December 2014 and it was the first 757-300 in the company’s new 1:200 mold. The model has a length of 10.75 inches and an overall wingspan of 7.5 inches and is made entirely of diecast metal, with the exception of the landing gear, gear doors and engine nacelles, which are plastic. The presentation of the model inside the box is something Gemini Jets has done really well. The box is very presentable; the flip top lid to view the model is aesthetically pleasing and allows a great platform to display the model while leaving it in the box. It contains the model, landing gear, gear door pieces as well as a display stand. It also includes a brief narrative on the history of the Boeing 757. This model can either be displayed in the gear extended or retracted position and it is fairly easy to change the configuration. The wheels are of good quality rubber and the model rolls nicely on its wheels as well, which is a nice touch.

The overall mold of this 757 is really nice, considering it was a new design for Gemini Jets. The design and detail, from the winglets and tail, right down to the signature nose of the 757 is accurately portrayed in this model. The fuselage and wings meet nicely with little signs of manufacturing and the construction is solid. The detail is great too, from the individual antennas, right down to the WIFI hump on the top aft section of the fuselage. One complaint I have with this model, however, would be the wheels on the landing gear as they appear to be a little on the small side, especially the nose gear. When compared with the pictures of the real airplane, the nose wheel appears much smaller than its real-world counterpart.

I wanted to take a moment to talk about the display stand that comes with this model. I personally think stands are a nice touch when it comes to displaying models and when you make the investment of purchasing a 1:200 model, I think a functioning stand should come with the package. That being said, the 1:200 Gemini Jets stand that came with my model was anything but a functioning stand. First, the quality of the stand was low and it was not nearly as nice as it’s other 1:200 competitors. The wood base is light and doesn’t feel as if it is crafted as well as some of the other wood stands I have. The overall stand was far too small compared to the model as well. Furthermore, the contact area where the stand and model came together was so undersized that the model would never stay on the stand. No matter how hard I tried or what position I put the model in on the stand, it would not stay on. I think the 757-300 model is just too long for the size of the stand that’s included, which was a pretty big disappointment for me. For this reason, I was only able to get one picture of the model on its stand.

The paint and decals on this model are very detailed and accurate. From the Delta logo on the fuselage, to the widget on the tail, right down to the underbelly Delta logo, all of the logos and decals are spot on. The model also includes the Skyteam logo, and the Delta award sticker (America’s Most Award-Winning Airline) near both forward boarding doors. It also has the ship number on the front nose landing gear doors as well as the top of the tail.

The overall quality and workmanship of Gemini Jets has come into question over the years. Many collectors have noticed defects, broken pieces, and major issues with their models even when they first open the box. I was hoping that this was not the case with my piece, but it was pretty obvious that when I opened the box for the first time, I too would be hit with this issue. While the marks and scuffs on my piece were not as bad as others have experienced, it can definitely be frustrating paying a lot of money for a model, only to find it comes with defects from the manufacturer. My pictures don’t do the issue justice; on the actual model, there are clearly some paint defects on the leading edge of the left wing. One such defect is forward of the overwing exit escape path arrows and the other one is just past the engine pylon in the direction of the winglet. While this issue is relatively small compared to the overall model, I feel it needs to be addressed in my review as it detracts from the overall beauty and craftsmanship of the model.

The overall score of this model is a 23 out of 30. If Gemini fixed their stand and quality control issues, this model would have gotten a near perfect score. 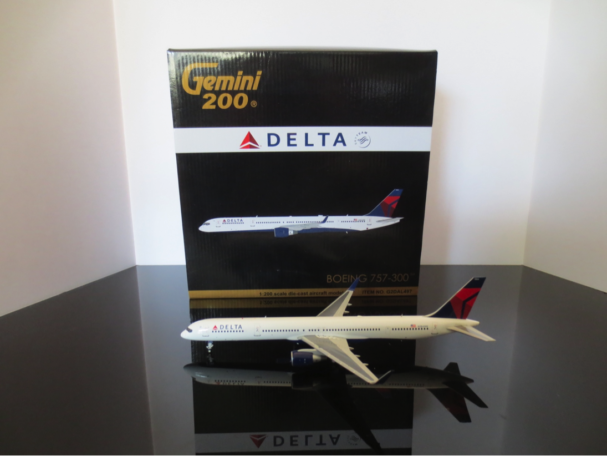 The overall model is a great, with lots of nice features and details. The new mold is a wonderful addition to the Gemini collection and will surely keep diehard 757 fans happy for years to come. Aside from a few issues that came with the model, I still think this would be a great addition to a collection, whether you are a Delta fan, a Boeing fan, or just love the look of the 757!

Prototypes and house colour schemes are an interesting collecting criteria, although until recently it was quite rare to see narrowbodies in house colours (the exception were Dragon Wings Airbuses but they are almost universally rubbish). […]