The quality of new 1:400 moulds, widebodies at least, has easily reached that of their larger 1:200 scale companions. Moulds that were only recently seen as top of their game have been knocked off of their perch by new moulds and the Boeing 777-300ER is one of the major battlegrounds in the scale for this. Despite the usual criticisms of JC Wings release schedule, they have in recent years proven they are more than a match for Phoenix and other competitors. The 777 is a great example of this.

The past twelve months have seen poor old Cathay Pacific take one hit after another. The weakness, and impending collapse, of its greatest rival, Hong Kong Airlines, would normally be seen as excellent for Cathay, but since it is related not only to the continuing struggle of the HNA Group it is little consolation. The ongoing protests against the Hong Kong administration, and their masters in the Chinese Communist Party, were bad enough and had crippled traffic into the city-state. Those issues remain festering in the background ready to reappear, but have of course been overtaken by the calamity that Covid-19 has created.

The site of the majority of Cathay’s fleet lined up on the taxiways at Hong Kong Chep Lap Kok have been one of the enduring aviation images of the recent months. Cathay group flight operations have been reduced by 96% during April and May and it is hard to see demand returning soon, especially with countries like the UK introducing minimum two-week lockdowns for incoming passengers. It has been suggested in the past couple of days that Cathay is looking at ‘structural change’, which can surely only be a code for massive redundancies.

Nonetheless, despite its current woes Cathay remains a cornerstone of the Oneworld Alliance, of which it was a founder member. Not long ago I was positing that China Southern’s departure from SkyTeam would mean it possibly joining Oneworld, but in the current climate the chance of this appears to have retreated into the distance leaving Cathay Pacific and Cathay Dragon as the alliance’s primary access to the vital Chinese market. Oneworld has also recently been somewhat wounded by the departure of Latam Airlines, following the South American carrier’s hook-up with SkyTeam affiliated Delta.

With the possibility of the Chinese economy recovering from Covid-19 faster than elsewhere in the world Cathay may yet have the opportunity to return to something akin to normal operations sooner than most, but without a vaccine it seems hard to see how its model of using Hong Kong as a global interconnecting hub can be viable for months, if not years. I am still confident Cathay will survive – for if a well-run, relatively wealthy, high profile, full-service carrier with a strong business affiliation and fortress hub can’t, what chance is there for hundreds of weaker airlines?

Since this mould appeared in 2017 it has easily beaten the older Phoenix mould into second place for 777s (possibly third if the new AV400 mould is as good as photos suggest). The only issue, as always, is that JC Wings release schedule is poor, but if you haven’t switched from Phoenix to JC for your 77Ws, especially given Phoenix’s poor cockpit printing, then you really, really ought to.

The model has all four aerials and the Wi-Fi dome. In general, they are good but the larger of the two dorsal aerials is not shaped as well as the other three. The landing gear is intricately made and accurate, aside from the JC Wings standard light grey gearlegs and wheelhubs. On the underside the maingear bay doors are not just printed but also indented as part of the mould. This compares favourably to the Phoenix 777, which has no detailing on the underside at all.

One area of criticism on the Phoenix mould has been the size of the engines and their pylons, which are generally thought to be slightly too small. That is not an issue with the new JC Wings mould. The GE90-115Bs are excellently shaped, sized and fitted on very good pylons providing plenty of ground clearance. The engines have separate fanblades allowing you to see through them (unlike the solid fan cores of the Phoenix) and JC Wings hasn’t bothered with the pointless spinning fanblades fad. 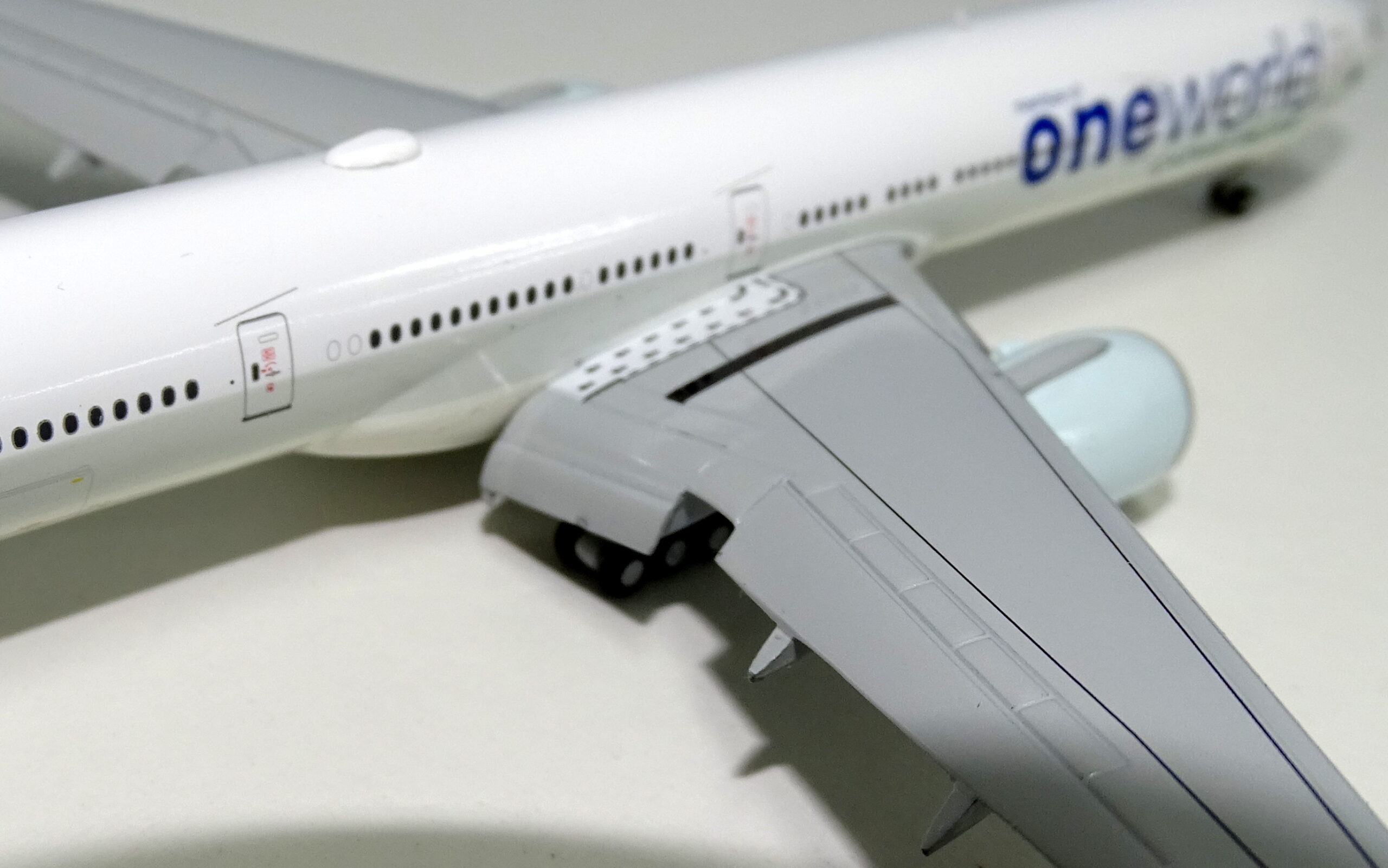 The earlier JC Wings 777s I reviewed had something of a gap where the wing joined the fuselage but that has been eliminated and the fit is tight and exemplary. It is possibly because this is the flaps down variant of the mould (JC Wings nowadays regularly produces both up and down versions of many widebodies) and so uses a different wing. Flaps down is a really nice idea and the detailing on both the anterior and posterior of the wings is exceptional. 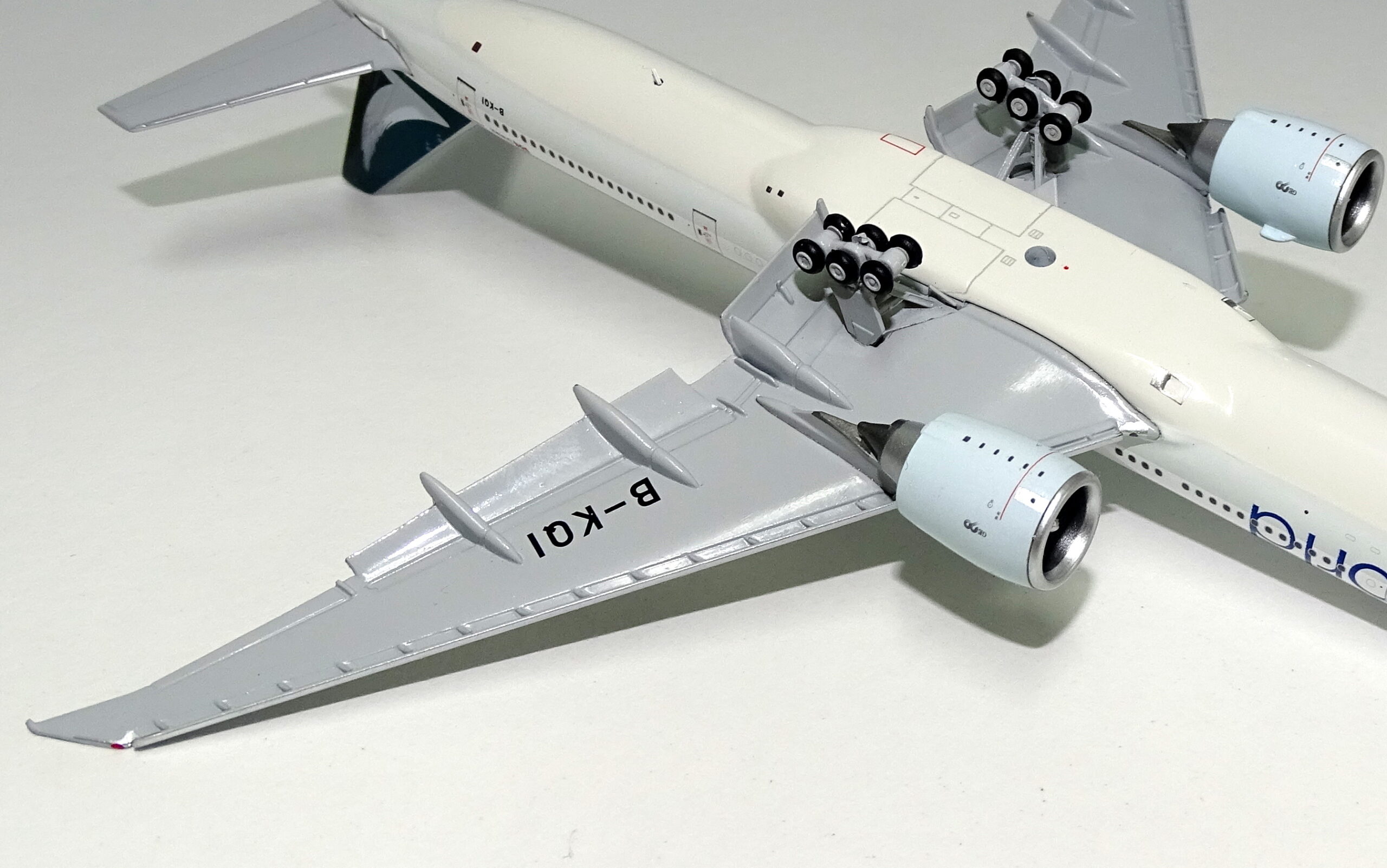 This is one of the best ever 1:400 castings improved even further with the addition of flaps down detailing. It can’t be beaten and is the acme of 777 design. I doubt it can be improved upon. The old Phoenix is still a great mould but this is better.

B-KQI wears the updated 2015 livery but the Oneworld variation of it. It isn’t a huge variation since the primary elements of the scheme remain the same and the only difference is the large oneworld titling forward, which displaces the Cathay titles into the grey band. Despite Cathay themselves being so incredibly grumpy about the use of their livery on models every 1:400 manufacturer should be able to reproduce it because there are still so many Cathay models being made, albeit as with this one in unmarked boxes.

Even so I think that JC Wings should probably make the grey fuselage band slightly darker than they do. It is not massively away from where it ought to be but it and therefore also the engines are a little on the light side. The other colours are a good fit. As well as the green and white this version of the scheme also introduces a dark blue for the oneworld titles.

As you can nowadays expect from these kinds of models the placement of the titles on the fuselage, and in relation to the windows and doors, is super accurate. It can’t be faulted. What arguably can be faulted is the tip of the small brushwing forward, which although feathered is a little too blocky for my liking.

Other details such as the registration and Swire logo are accurate and excellent. 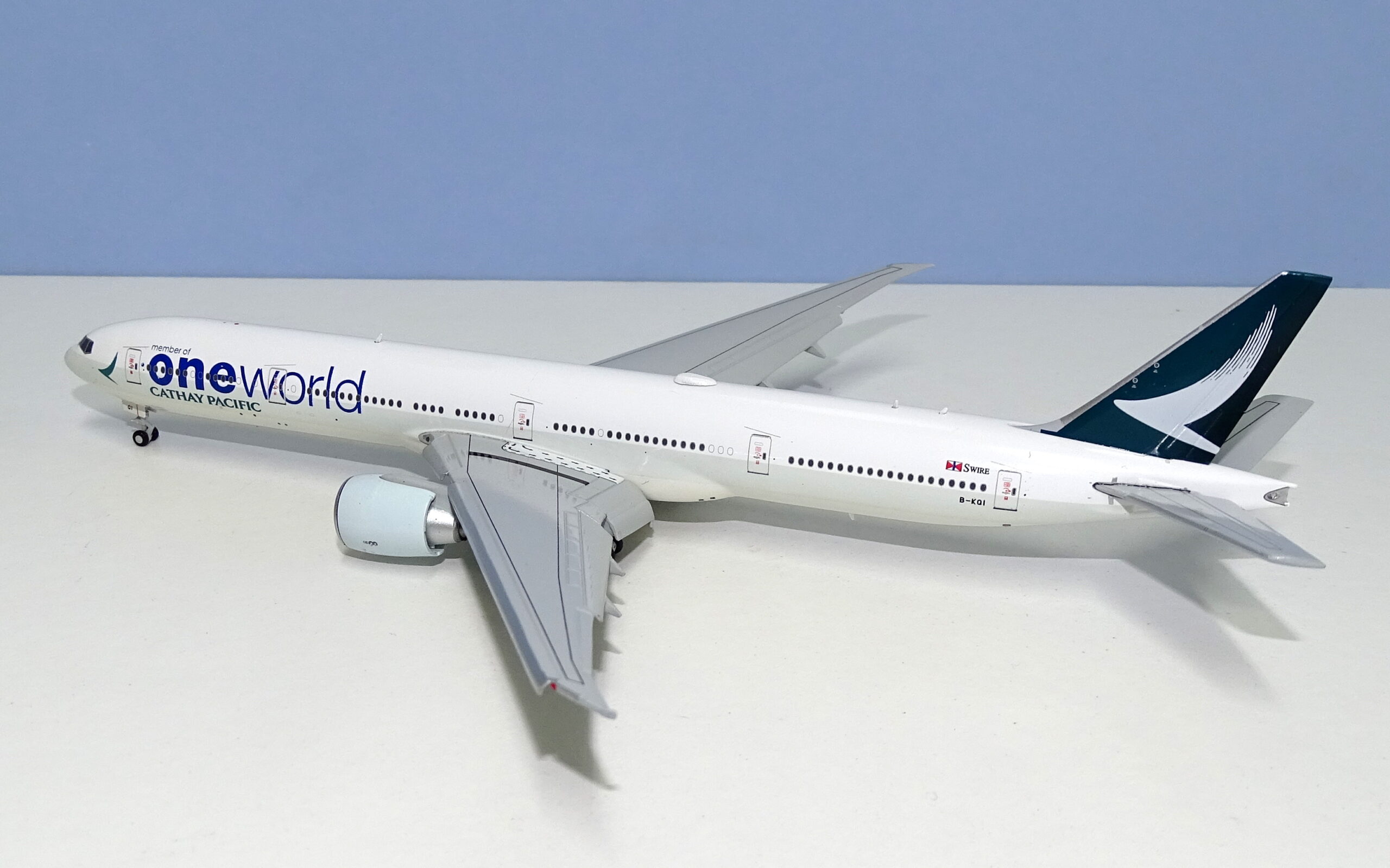 Outside of NG Models nobody prints details as well and as finely as JC Wings. They do not disappoint with this model. There are printed elements that are hard to see even in photos, such as lines above the doors and circles on the forward edge of the vertical stabilizer. All over the model the printing is well applied and very detailed down even to the tiny GE90 logos on the engines. 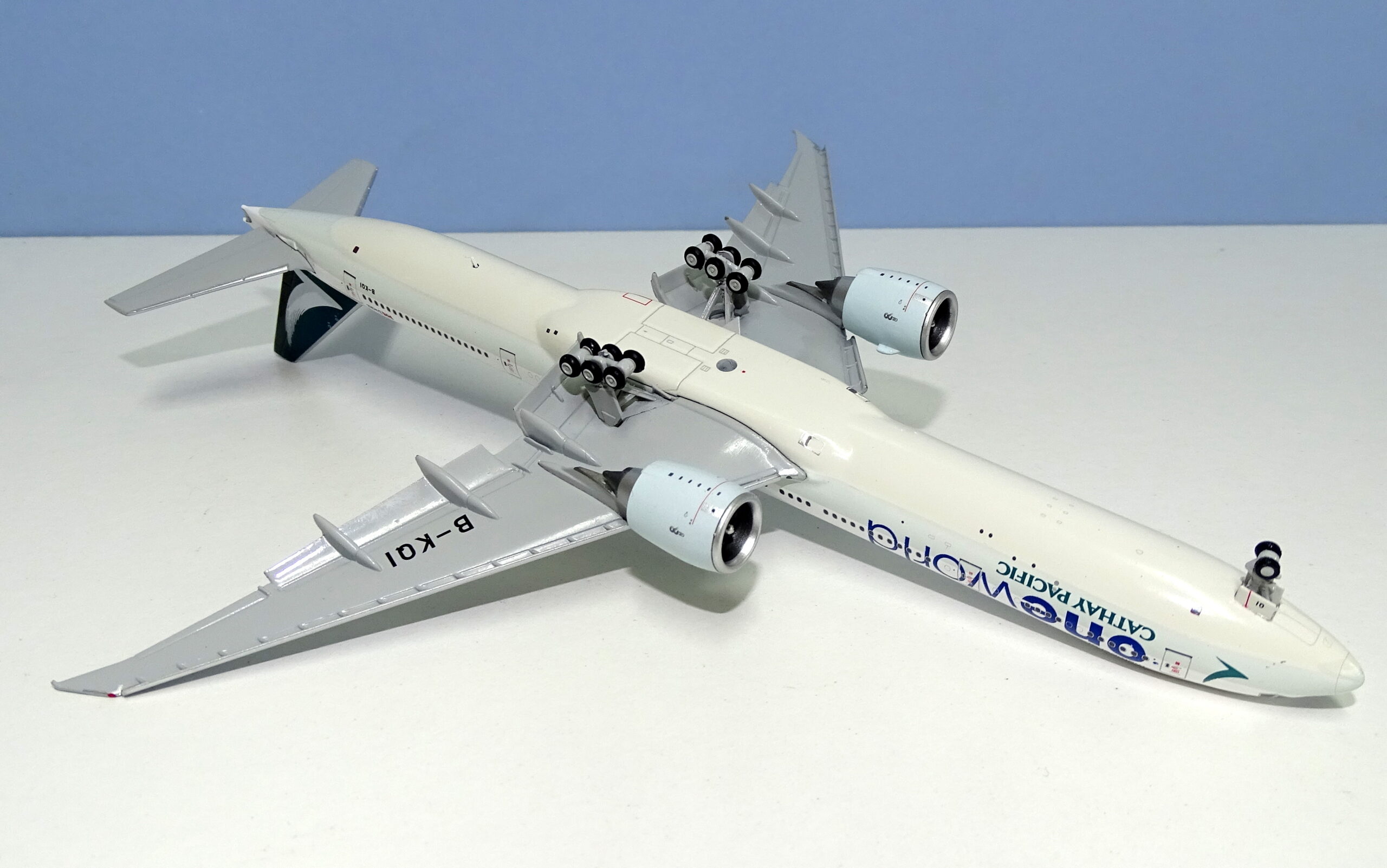 I cannot recall the last time I suffered a major mishap with a JC Wings model’s construction quality (something I can’t say about Phoenix). The quality on this model is unbeatable. As with other Cathay models made by JC Wings this model comes in a rather unusual orange box but an addition added to these models is a collector’s card. I’m not sure why as it doesn’t say x of 200 as these usually do, but it is a nice touch nevertheless.

The last time I reviewed a Cathay 777 by JC Wings it was in a non-standard livery and also received an almost perfect score. This model emulates that and exhibits the sort of quality finish and detailed touches that I just do not see in competing releases from Phoenix. My recommendation stands that if you need a 777, regardless of the wait, you are best off going with JC Wings. You won’t be disappointed when it eventually arrives.

There seems no limit to what NG Models can do and impressively they have met all the deadlines they have set for themselves whilst at the same time welcoming feedback from collectors. In under a […]